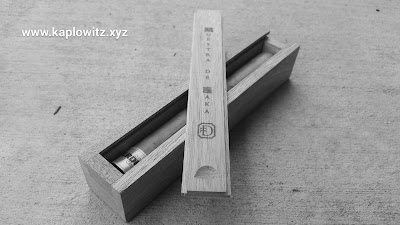 PRE-LIGHT
Coffin? Foot ribbon? Candela? Is it my birthday? Minimal veins, but a couple crimps. I don't see a burn impediment, but there is a ridge of one wherest my smoke-hole is set to be set. Seams are tight, even, and hard to spot. Complexion is even. There is some lumpiness of shaft. Cap is affixed well 'nuff but a tick off-center. Foot tobacco, addressing the other end, is a medium+ density by the eye-balling and mainly auburn-colored. A streak of brunette and two ticks of dirty blonde.

Charmin squeeze testing results in a medium+ density of pinch, and evenly up and down the shaft. Schnoz don't reveal much from the top-leaf. A light earthy white pepper. A flit of alfalfa. At the foot is more alfalfa and a white peppery hay note. Earth, dirt. Clipping with a Xikar Xi2, I free a medium tension'd cold draw of sweet grass, pale spices, and white pepper. Cardamon.

Burn is an outside-lit tick of ribbon. Packing hath softened a 1/4 tick from torching process. Tension of draw is same hot as cold. Line evens as I type. Smoke out-put is lighter than average off foot, but satiating in the smoke-hole -- just not heavily so, 'natch. Green apple slices. Ash is a tick aerated but seems solid of core. The ladder-rung build is unevenly so and of medium grey hued marblings. Burn-line is of medium thickness and at this point, darn nigh dead even.


ACT I
Smoke is very smooth textured with just the lively hint of a tease of white spiced zetz. Vibe of chamomile buds and dandelion tea. Pack density ceases softening as it recovers. Re-firming begins at the final third and then travels on downward. A light honey comes in softly, as doth a sugary lemon rind. Cinnamon graham whisper. Apple, green, sweetens. Caramel.

Smoke out-put increases off each end. Room-note is a toasty pine. An inch of burnt offerings hangs a tick precariously from its even yet tick-ribbon'd line. Floral aspects pick up on draw and sweeten into finish. More chamomile. Body is a -medium as are flavors. Strength ain't yet moved the dial. Pack has all-together re-firmed. Draw is fantastic. Pace of smoke is casually slow but neither tedious nor laborious. I step away from my Chromebook to stretch my legs and an inch and a half of ash drops, startling my cat. Very powdery and a bit coarsely so. The ash, not my cat.

Ash browns a tick and the blistered area is flaky, dark. Finish toasts as well, whisking away some sweetness, or at least offsetting it nicely 'nuff. Bread is a bit more grain than white now -- a light rye. Butter comes in. Cardamon takes off. Coriander! ... that gets added in. Fairly and surprisingly savory meow, on coriander and rye transition. Curry vibe from the coriander is very nice, indeedy. Big smoky-smoke. Noticeable softening of pack, but draw and seams are not messed with. Nub is quite soft in smoke-hole. A slight sharpness in in texture and notes on the immediate draw. Molasses? Was not expecting that.

ACT III
Dandelion root. Ginseng. Tea, white leaves. Revamping white pepper with mayhaps a tick a' black. Curry is flexing in coriander. How cool! Rye. Burn is crooked, not fercockt. As is a bit ugly, but I'm sure it has a great personality. Truckloads of smoke, and thicker at that. Nub soften, shoulder loosens. Smokes fine and cool

Cereal, oats and verily so. Earth, sunny and dry is primary at the band, with a alfalfa under-belly. I ain't ready, gentlepersons, to be shown the door.