Somewhere on the internet, I saw a knock-off Tiramisu recipe involving Twinkies and Reddi-whip. Could be that, too. Prepared as the aroma of the Patty Melt eaten prior still lingers in the air and as the cast iron pan has yet to fully cool. Did you mean to use that much pepper on the burger? Because it somehow works.

Mascarpone sounds (if you say it wrong) vaguely like what a racecar driver would use to call into his pit to say he needs a tire change or to pee. This Society Cigar is another like the Punch People's Champ, a thing created in part by the company's fanbase. It's a tick out-of-balance, but again, somehow works.

As with the PPC, I can see the mass appeal and the appeal of the masses.

Decent weight in the mouth, but a tick light for its size in the hand. A bit toward the quick side in terms of pacing. Holds a nice ash and draws quite well. The build is a bit lumpy-veiny and flutes near the char, its soft-ish press doesn't hold fantastically. I will say the aroma is delicious and is exactly like the draw notes.

A smokeable semi-sweet chocolate bar up-front. Behind that is some scant-slight baking spice which threatens to show a tick-thin diesel-y but doesn't. Some charred softwood lies in a plank over soil underbelly. In comedy, you'll get the simp; a character who's dumb. These dummy characters only work if played by not-so-dummy comedians.

Making a dummy play a dummy for laughs won't work. This cigar can't be smart or dumb, for it is leaves and not man, but it is simple and that simplicity is reached intelligently. Blender's intent was attained. Groovy. Plus, it skirts around linear flatness and does show some bits of nuance. Excellent balance, all things considered. Kahlua drips in mid-point. Mesquite murmurs-in toward the final act.

The draw does get a bit hollow at times and the line wobbles and widens here and there, always self-correcting. Ash is about as oily-dense as ash gets and ditto in re the plush-lush leathery mouth-feel. Less than moderate smoke out-put furnishes a weak aroma. No hard or soft spots in the roll and its press mainly holds. A confident, not boastful smoke that understood its assignment. 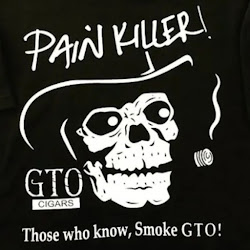