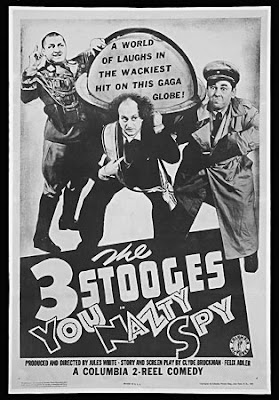 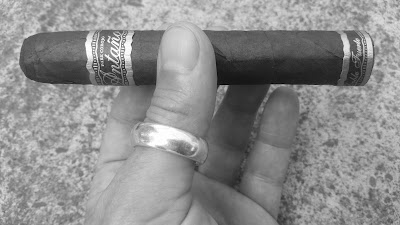 “Against the assault of laughter, nothing can stand.” - Mark Twain

You Nazty Spy! was the first American comedy film to satirize Adolph Hitler and Nazi Germany. It beat, by nine months, Charlie Chaplin's The Great Dictator. It also helped in the making of The Great Dictator in its not-so-subtle digs aimed at those trying to censor the Chaplin film. The Hays Code of that time's Hollywood machine prohibited most political/satirical messages. It required that all peoples world-wide be depicted fairly -- this sounds lovely -- but it was in actuality used mainly to nurture the isolationist sentiment that was the bent of the public. A bent which well suited the establishment. Short films, like this however, were subject to far less attention than feature films. Moe Howard, as "Moe Hailstone", thus becomes the first American actor to satirize or even portray Adolf Hitler in a film -- Moe Horwitz, a Jew --this can make me smile all the live long. Not to mention, but I will, that it is a splendid portrayal. The opening disclaimer of "Any resemblance between the characters of this picture and any persons, living or dead, is a miracle," has the same feel then of Andy Kaufman's terrible impersonations building up to an ingenious channeling of Elvis.

As to the Joya de Nicaragua: oily velvet hand and mouth-feel. Although there is a broad vein in 3/3. -Full body on that oil and too a creamy dollop. Creamy cedar, nigh waxy dark chocolate, black pepper delivered smoothly ground and cushioned in compost, and some mulling spice on the retro-hale. Flavors are medium+. The cup of coffee is going real well alongside not behind, and when my mouth dries post-sip, I get a tick of leather on my palate. Dark toasted cream permeates the thickness. Strength ain't come around yet at an inch in, but shall. Burn is a slightest of waver and ash clings tight in ladder-rungs of 95/5 salt/pepper. Draw is smooth but a hair perhaps hesitant. Packing began as shy of medium insofar as density, and now softens a tick more. Shaft is evenly distributed. Burn wanders a tick further off of even as a bit of top-leaf seam opens some.

"Quiet while I think," says the bowl cut leader of our gang, current wallpaper-er and future dictator of Moronika - as he witlessly yet brilliantly transforms into mon fuhrer. Curly hence becomes Field Marshall, and unto Larry is bestowed the title Minister of Propaganda. Moronika. Propaganda. Moronkia for Morons -- a clever enough spin off of Germany for Germans -- and a calling out to America, to be more than just simply America for Americans. After all, "Loyal Moronikans shouldn't read." The Jewishness of the Stooges, notably overtly on display in this short maybe more than any other, adds a lot to this for me, not simply for those obvious reasons I'll steer clear of for the purpose of time and to avoid rampant reiterations -- but even more-so because Yiddish is hilarious, and Moe, Larry, and Curly use it more in this short than in any other. The much used "beblach!" means "beans," by the by.

"We will now pause for station identification. This is N-U-T-S."
Caramel and nougat come in on a purple fruit juice or jelly high under-belly. Smoke is bluish, I'm Jewish, and the ash is picking up a yellowish hue. I have to forcefully convince almost two inches of ash to roll off in my $0.99 Walmart tray. Chocolate drops the waxy, stays dark, gets yummy. For all the flavor and body, I don't feel to have a fully satiated smoke-hole. If going the Manischewitz route, gentlepersons, I'd suggest Concord Grape over Blackberry. Meaning this Joya de Nicaragua offering ain't THAT heavy. It's also teetering on laborious, as it smokes slow, pulls spongy damp, and don't develop a whole bunch. Strength ain't coming on as I thunk it would. I guess one might find this calming and not laborious - but that means the same thing and is contingent upon yer mood and/or circumstance. Mulling spice steps up with a neat orange rind in there.

It gives the sense of more than just rallying public opinion in favor of their vested interest - they too are speaking to our own kind, in our own language, and sharing in a very Jewish sense of humor. A rampant fear that like all other fear, is quelled by laughter. Precisely, this is should-be mandatory information, not at all propaganda. Furthermore, it is doled out via "Duh moments," not a special interest lobbier among them.

"The boy's from Syracuse," is a splendid little side gag. "And you shot me in the excitement, you fool," is very good, too. "Your minorities are creeping into our majorities, until you're making our majorities minorities." Is as truly laughably stupid then, as it is now.

(A reference to blintzes with sour cream.)

As to dialogue, there is the brilliant wordplay -
Larry: If I take Mickey Finlen, I better be rushin'.
Curly: Then quit stallin'.
(A reference to Finland, the Soviet Union, and Joseph Stalin.)

This Antano is bit reminiscent a' those Terry's Milk Chocolate Orange Balls. Nothing of the notes fall off. A Wonder Bread note comes in, toasted lightly. Honey starts up too, just as caramel and nougat make a liar outta moi and take their leave. Retro is a nice citrus floral pepper zetz. I like this Antano, I just wish I could get more smoke in my mouf. Draw tension has remain even, but unfortunately, so has its less than stellar resulting. A seam opens a bit again at char and top-leaf cracks some. Really, my lone gripe doth remain the sponginess of it all.

Both Moe Howard and Larry Fine cited You Nazty Spy! as their favorite Three Stooges short. While it isn't my personal favorite, I recognize its genius, and wouldn't argue with the two Stooge mainstays even if I didn't. Because, too, of the simple fact "There ain't no bones in ice cream."

In the end, the fuhrer gets his, and I ain't lyin' when I say this short is a must, must see.

EDITOR'S NOTE
All works previously published at www.kaplowitz.xyz
Thanks for the loaning of yer attentions, gentlepersons.