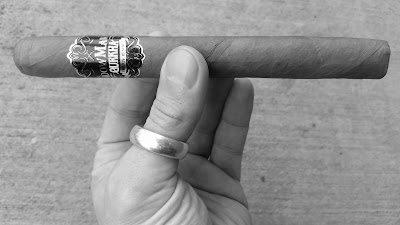 PROLOGUE
Purim is past, it pains me to say. I'm still trying to figure out who the heck drank all my Manishewitz yesterday -- and why I woke up this AM burping Concord Grape. Some things are to remain mysteries, I suppose.

PRE-LIGHT
Tan. There is a bit of vibrancy coming up from the not too far down -- a burnt sienna type thing. Tan over-top is even complected. Some sparse and slight greenish marbling. Bit of a sheen with a mostly even distribution. Veins are minimal and only a singular one in the 1/3 is worthy of note. Seams are tight and even, lest one that has a bit of a stretch-mark to it. Cap is well-affixed. Foot tobacco peeks out at a couple varying shades of auburn with a tick or two of dirty blonde. -Medium density in its looser core. Outer rolls are a medium.

Hand-feel is balanced well for its size; 52RG Churchill, indeed. Pfft. Overall packing up and down the shaft is a Charmin Squeeze Test medium with a slightly lethargic spring-back. No veins to impede the hand-feel, as I don't typically hold a stick in its 1/3. The vein there is a sharp thin ridge.

Schnozzing the shaft, I get creamy cedar notes, and moving to the foot some blanched pale nuts. It's go time, gentlepersons -- or the first wave thereof... I nibble off the cap of the seemingly delicate top-leaf. Tastes a tick green. Cold pull is of a medium draw resistance and has a bit of green, as well. Mainly there is a very creamy smooth cedar note. Some hay underneath.


LIGHT
Cedar with a slightly sharp vegetal laced hay or green note comes off the foot toasting. First hot pull is very dense cream with a sweet cedar poking through the haze. Underneath is a sweet hay. Second hottie is a retro-hale which finds a nut vibe under a thinly white peppered rather sharp vegetal note. Third hot one is all that and perhaps a thinning and warming of cream.

Burn is a bit off into a wave on one side. A seam is loosened at the burn-line. Line itself is a medium thickness. No loosening of packing off the light. Draw is dead medium and unchanged. Big sweet clouds of white smoke with a hint of mild white pepper in their cedar. Ash is 80/20 salt/pepper and trying at a sheath. Palate is quite full, but the body has tapered off some. Mouth-feel is a soft thing of perfect moisture level. No strength, medium+ start to the profile off the heavy body, not the minimal flavors.

ACT I
Creamy to the point of having to squint through the fog to find further notes. Sweet cedar, hay, vegetal, white pepper and a blanched pale flesh'd nut vibe. In that particular order. Cedar up-top, hay is a high backing underneath, nut vibe comes and goes in the middling. Rest of middling is the cream... a cream which bulges over on into the primary and under-note.

I roll off an inch of ash -- satiny smooth cool powder. Burn is not correcting itself, neither is it going further astray. Some sugar comes into the sweetness and beats down further, the vegetal. Hay gets some of the remaining green and it's more a grass note now, or at least mainly. Very smoky, a good burner. Although after I type that, I spin the Gurkha in my mitt and spot a potential runner.

That new grassy hay goes up to the middling to create a sorta complexity therein. Suede is underneath now, as a new note with a new gig. Cream has ceased subduing and its still a quite potent and driving note. Much of it is in the primary now, without relinquishing any of the middling.

I re-touch a bit and notice the top-leaf has cracked a bit under my hand. Profile is a medium+ and strength is nope not at all. Ash is more white, but also less solid. Packing density holds well. The runner has been deftly dealt with. Although another spot seems to threaten. Draw is now a medium+.


ACT II
Some blonde coffee comes in to play a bit. White pepper seems gone. There's still a tick of green here and there, which is surprising in this-aged tobacco. Very mellow and smooth, this Widow Maker. I'm guessing it would live up to its name only if the Mrs. were to find out what ya spent on the thing. Still, it is not quite relaxing -- two runner threats and a cracked wrapper under my hand, don't breed nonchalance. Ultimately, it's enjoyably sweet cream. Simply so. Near one-dimensionally so.

Burn is evening on its lonesome now, and more definitely. Nuts are peanuts and cashews, blanched. Hay has taken back over from grass. Suede under it all is nice. At the midway, new flavors are holding, as are their predecessors. The top-leaf, humsover, is unwrapping from burn-line up. In the interest of full-disclosure, I have smoked one of these prior. I did not have this unwrapping wrapper issue... and I was not nearly as kid-gloving it as I am now. I was Radio Herfing.

At the end of the second act, primary note is a creamy cedar. Upper middling is creamy blanched nuts and under that blonde coffee, and a sweet hay light barnyard. Suede is holding 'em up nicely. Flavors are all quite soft and kind. Very enjoyable. Green is gone, a slightly more mature vegetal ebbs and flows... flowing less and less. A smallish caramel note seeks the coffee, in a very weakly brewed latte manner.

Profile stays the same medium+. Strength is a 90lb weakling getting sand kicked in its face -- but muscles ain't what this Gurkha is about. Draw is back to medium resistance. Packing is a tick more soft. Big smoke, white and thick enough to obscure my keyboard. Ash loses the flakiness it had going on a bit ago. I don't trust it enough to put away my schmatta. Another runner threatens...


ACT III
I roll off an inch and a half of mainly white ash of a nice oily powder density. Burn and wrapper are a melange of fercockt at this point. Caramel soars. In its wake, a vanilla vibe sidles up to the profile. Also, the white pepper returns in muted form on the retro-hale only. New ash begins in a flower.

Flavors are seemingly all on-board, and too, losing delineations even post-purging. Mouth-feel is quite nice. Cream has played a part in every note thus far and now it takes over. Smoke warms a tick.

At the band, a slight white bread comes on in a doughy fashion. It lays on the suede and messes further with delineation. top of creamy cedar falls. suede rises. Very one dimensional, and it was never far from there. Into the band, burn actually evens, but a bite sets in. Oy vey, gentlepersons.


NOTES
The best tasting Casa de Garcia CT ever there was. Although CdG offerings tend to not disintegrate in my hand. They simply go bitter and plug up, if memory serves.


EPILOGUE
Can someone please tell me why a number I don't recognize keeps texting me to stop calling it?