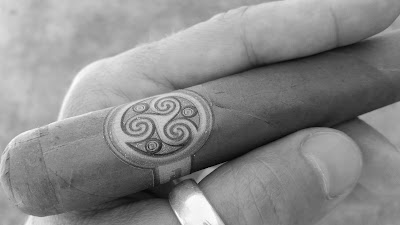 Silky smooth handfeel impeded only slightly and once by a crimped vein. Feels a tick light, but has great balance in-hand. Evenly complected Colorado. Charmin test squeeze is a bit soft-sided, but springs back well. No soft-spots. Box-press is rounder on one side than other. On the plus side: box-press is sharper on one side than the other.

A note as I get set to cut and light. This review is keeping THIS post in mind. Namely, and as such -- I will not be using food-centric flavor notations. In a forthcoming full write-up, I shall dazzle ya with my chef's palate of grub-stuffs.

ON SHAMAN GHOST
Opening features a smooth even draw delivering a sweet flavored forefront with some sour backing via an acidity on a quite creamy medium body. The acidity dials back a few pulls in and an umami comes into play alongside the sweet creaminess. Mouth-feel dampens on that note, but not egregiously so.

I don't, maybe can't, agree with Matt Bernier plugging Shaman Ghost into his Top 5 list of horses in the far-off upcoming Breeders' Cup Classic. Here's his list via his The Matt Bernier Show:

[I'll later throw in my own list of five.]

Combustion is offering a dead-even burn-line and ash is a pale grey loose sheathing. Pacing is leisurely but not boring. So far as construction, draw is nigh brilliant, but the pack density has softened noticeably. Too, a seam is a tick loose at the burn. Back to combustion: the foot-smoke has really up-ticked its out-put. Room-note is very like the draw with a sweet savoriness. Draw notes cream up and grow more full (medium+ body). A slight sour underbelly comes back in. Very balanced. I will say that a retro-hale showcases this Gaaja's umami aspects quite well, whilst too offering a pinch of salt to the palate and evening out the moisture level in my smoke-hole.


Nevertheless, the four year-old Shaman Ghost is being somewhat lauded, if ya can be somewhat lauded any more successfully than you might be able to dabble in fanaticism. This comes off his recent run at Belmont's romping of field at the G2 Brooklyn Invitational. Prior, he did win the July 2015 Queens Plate; those two races were the bread surrounding the meat consisting of two other races where he finished in the moolah -- an more recent allowance race and Prince of Wales. Even prior to that, Shaman Ghost did have three wins in lesser fields which followed his shaky start of 4 - 6 - 4 finishes.

In the aforementioned Brooklyn on June 11th, the son of Ghostzapper faced and buried a field which included favorite Kid Cruise mainly not firing then coming home wide into the stretch. Shaman Ghost did do well, though, and verily. He broke flawlessly and put up reasonable fractions off a reasonable pace, staying never too far off the lead. He was actually quite patient throughout and then let loose to open up something like a half-dozen length lead then win. In my little opinion, Mr. Bernier is not incorrect, per se... but this speaks more to my recent kvetch: the lack of talent in this year's three year-old crop.

EFFINEX EFFINBOMBS IN STEPHEN FOSTER
A sip fills ya smoke-hole up to over-flowing. Fantastic draw. Finish is lengthening and mainly sweet with a slight bit of bitter. Bitter is a very nice draw addition and really now, this Mbombay offering doth hath nailed finely balanced. Strength is up a tick, gently. Ash drops for the first time at the onset of Act II, as I was making my way toward my $0.99 Walmart tray. It's quite powdery, shy of a talc consistency. Dry. Sour notes have died back again. Creamy texture briefly thins then again thickens. All told, this Gaaja is smooth with zilch bite.

It wasn't a bad break out of the gate for Effinex. It did seem a bit hesitant to me, tho. He didn't not fire -- but the five year-old horse didn't not not fire either. He seemed to tire with five furlongs to go, finishing sixth to a wire-to-wire Bradestar. Eagle had a nice run from far off the pace to finish second, then came Majestic Harbor to show. With the end nigh, Effinex did go way wide.

Burn has wobbled a tick, but I'm not sensing a re-touch being needed. The sharper end of the press has rounded now. Foot-smoke ebbs. The tea I've paired, pairs very well and serves to showcase the nice umami aspects of this offering. As I type, the burn evens itself. Beautiful complexities on the retro hale, gentlepersons. Strength is set to cruise control at a low medium. Body has become a medium. Favors a medium plus. Kindly unassuming of a profile, but it brings more than 'nuff to the table for quiet contemplation. Like all Bombay offerings, this Gaaja is of an exotic bent -- and perhaps more so than much of its brethren. Too, less overtly.

Lettuce talk weight. Bradestar carried 122lbs, Eagle 117, and Majestic Harbor 118. For the Stephen Foster, Effinex was assigned 112lbs. Did this make a difference? I thought it did and saw it immediately upon the gate opening. He is, I maintain, a solid in-the-moolah runner whose only other bad run was in June 2015's Brooklyn Invitational where he crossed the wire eleventh. Two lil blips on a nice-sized radar screen resume.

At the second act's close, there is a bit less of a creamy texture as salty bits get a slight mineral addition on the draw. Ash drops quicker at this point; lasting shy of an inch.

KAP'S 2016 BREEDERS' CUP CLASSIC TOP 5
The Breeders' Cup is in November. I am cyber-penning this post on the second of July. This ain't no prediction, gentlepersons. This is simply who I'd be looking to NOW - if now was the second of November. It isn't, as stated.

5. Destin. The current year's Triple Crown crop, drek although it were/is, needs representing here. In lieu of the sick colt who won the Derby, the one who needs setting up who took the Preakness, and the one winning Belmont via rabbit... I give ya, gentlepersons... a five-slot grey with maybe the biggest upswing of his fellow three year-olds. If that's there like I think it is, Mr. Pletcher shall bring it out and his daddy being Giant's Causeway ain't nothing to sneeze at. Heads up: he's possible for the Travers Stake. That's a tip/prediction, gentlepersons.

4. Effinex. Okay, okay. The what have ya done for me latelies are a tick lacking in the five year-old horse's resume, but we already done covered his Stephen Foster go -- or lack of go thereof. The Seattle Slew > A.P. Indy > Mineshaft thinning out pedigree is still wowsers. Plus, I like his name. No. I love his name. Look, I ain't a pro, so an ode to an ex is 'nuff. If I were a pro, tho -- I'd have plenty to hang my hat on. There's just not an abundance of Gr1 hat hooks.

3. California Chrome. Here's a horse whom knows how to mature, gentlepersons. In the best of the best competition, humsoever, he historically and doth continue to come up short. I don't give this five year-old champion horse the praise so readily heaped upon him by others. That wasn't me preparing to announce I would now start to do so. That was me just noticing, gentlepersons.

2. Beholder. I love Zenyatta and I'm married to a feminist. Mayhaps I am biased and this is why I'm placing the six year-old mare ahead a' CC . There does seem to be a hesitancy on Spendthrift Farm's part to run her against the boys, so  I could question her competition... actually I'm surprised more haven't. I mean Melatonin didn't make my list because of lesser competition.

1. Frosted. The four year-old colt didn't fire in the Dubai World Cup. Is he hot since returning state-side, or was Dubai a blip on the radar? Because if hot's the answer -- he could too run cold. I'm personally on the fence herein. This list though is NOW, and it don't get a lot hotter now than Frosted. Which is excellent wordplay, I must say. Problem? The last time he didn't fire prior to Dubai? Last year's Classic. Oy.

The heightening salted mineral aspect plays nicely here and doesn't rock the balance boat at all. Room-note is an umami-fest and is actually working up my appetite. Methinks this Bombay to be a perfect smokeable apéritif. Then again, it is almost lunchtime and I've had a peanut butter sammich calling my name since breakfast digested. Umami sensations and salted minerals delivered sweetly, jockey for the lead down the stretch on a medium bodied creamy texture with a slight sour note coming off the pace. Some bitter notes are present, just 'nuff so to brace the sweets. Again, nigh supremely balanced, this Gaaja.

The ash drops often and my schmatta is earning its keep, whisking clean my keyboard. Nub is firm and too, vastly rounded. Smoke is cool although my palate is a tick toward parched. Strength wraps up at a bulls-eye medium.

What does your Breeders' Cup five look like? Just kidding. I'm honestly, nothing personal, not all that interested. I will, humsoever and as per usual, thank you gentlepersons for the loaning of yer attentions.