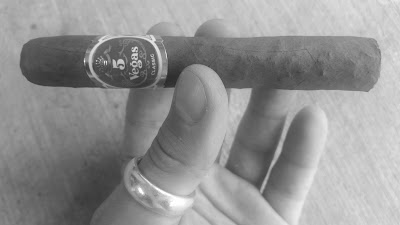 PROLOGUE
It's comfort food ya smoke, gentlepersons -- and I need comforting. Cincos are to me, Dad's Te-Amo. Replete with occasional backseat-of-cab-musk room-note. Man, I'm looking forward to this...

PRE-LIGHT
Lumpy Shaft. That was my nickname awhile ago and during another project, gentlepersons. Also, it suits this Classic. Natural brown complexion with a teeny green spot in the 1/3 and an espresso bean marbling under a matte oil finish. Veins, but none egregiously so, and seams are tight and even. My glands are swollen and doth hurt. On a scale that reaches 200, the grass allergens here in the PNW are sitting at 600. Cap is nicely affixed with mayhaps a hint at haste. Foot tobacco is a medium+ density to the eyeballing; auburn to brunette in hue.

Hand-feel is a smooth nigh velvet impeded some by lumps. A dry oil works up and onto my mitt as I finagle the Vegas. A classic 5 x 50 Robusto -- what's not to like? Good balance, nice heft. Charmin squeeze testing results in an even medium+ density of pack. Schnozolla notes are an interesting dusty herbal floral thing on the shaft with a light cocoa and white pepper addition at the foot.

I nibble off the cap to release cold notes of red spice, mainly. Some bittersweet notions. A cold under-belly and finish of diner coffee laced earth. Draw tension is a medium.


LIGHT
Toasting the foot is easy as pie and lets loose an aroma of leathery earth with some pepper. Lots of smoke and in it is a slight green-grey tint. First hot pull is a flip-flop of the cold draw -- that earth/coffee note is on top, muted red spice rack and bittersweet vibe is behind. White pepper, a good zetz is on the second tug, which is a retro-hale, then lots of coffee hits my palate as notes drop there from my nose. Some thin cocoa. A third hottie adds herbal and floral notes on the immediate draw, which resurface at the end of a medium length'd finish. Very coffee, very earth. Spiced and bittersweet cocoa middlings. Under-belly of earth dashed with floral herbs and white pepper. We are off to the races on this 5 Vegas, gentlepersons.

Ash is a loose and tick cracked sheath of medium greys. Line is even and -medium thick. Draw stays dead-honest medium. Smoke out-put is impressive and paler than prior. Pack doesn't budge off Djeep lighting. Room-note is very light and of an herbalized tobacco bent.

ACT I
The ash, at 3/4" in, divvies into loose ladder-rungs. Floral and herbal notes soar underneath and a thin honey goes there. Up-top is still coffee but now cream is poured in and sugar, spooned. A simple earth note rides alongside that. Middling remains the cocoa bittersweet stuff with some wood shavings added in. Gosh if I don't just have a soft-spot for these Cincos, gentlepersons.

Combustion is a tick quick-sided, but even-keeled. The pack softens now, about an inch ahead of the char. Speaking of char, the wood shavings get a toasting and a white bread flows in toward there. Whenever I smoke these Classic, and I've smoked a lot, I get a visual of sitting in a diner over a loaded cup of java and buttered white toast. Cocoa sweetens then dials back. A mainly gentle red pepper surfaces on a retro-hale. In its wake is a heightening of that thin honey. Mouth-feel is light cream with a sweet spice tingle; good moisture level. Ash is at an inch+ and a seam opens a tick at the burn. Line remains even and has thinned. Sugar flows into the red pepper and caramelizes there. Earth muscles past coffee and cream in the primary.


ACT II
Such a smoker, epis! Easy draws and voluptuous out-put. Line does waver a tick in the opening of the second act. Very earth-centered and led now. Leather comes into the white peppery under-belly to brace the dialing back herbal/floral bits.  Cocoa is a thin sorta chocolate soda or egg cream in the low middling realm. Red spices ride high in that middling. Wood shavings go into the bulging and now 101 level complex earth note. Smoke is smooth, cool, and lightly cream'd.

Combustion continues to be quick-ish. Construction re-firms. Line evens. Ash is paler of a grey mixing and clings on in loose ladder-rungs. Room-note is very light and sweet with a floral aspect. Draw remains easy, and maybe loosens to a -medium tension.

Yesterday, I Kibbitz'd ponies in the AM, pugilism in the P-of-M, and blind-reviewed a simply fantastic offering betwixt. Today, I rest. Thanks, 5 Vegas. Very earthy now, and the bittersweet shows some tanginess. Tonight, I schlep to a Neighborhood Association board meeting. I do not mean to brag.

Profile is a medium, strength is a -medium. I probably shoulda mentioned that already. A tick of top-leaf loosens by the ban', so I'll leave the sucker on as long as I can. Earth gets a peanut-y addition in a vibe manner.


ACT III
Mouth-feel is a bit more sharply moist than before. Notes are vastly aspects of an earth core. There's a touch of egg cream, a cup of joe, some bittersweetness, peanut, and a desperately yet calmly clinging floral/herb. White pepper, leather, and red spices ebb and flow. As I said, though: Earth.

Packing softens but holds. The band removed sans incident. Profile/strength hold. Line is an even ribbon. Ash is unchanged. Smoke out-put garners another ditto, as does room-note -- actually, there's a hint of citrus rind in the air around me. Maybe there always is? I'm quite a thing, ya know.

Today is a great day to consider sweatpants. Mine are grey, so is the smoke now. Too, it heats up at the nub.