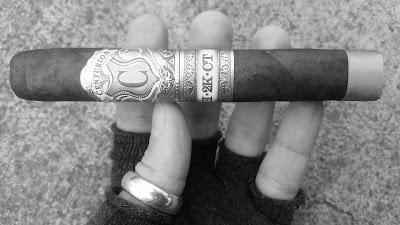 PROLOGUE
My first bespectacled write-up! I feel the glasses make me look like an even 50/50 split of Rabbi and Malcolm X. That's good. The chubby girl at JC Penney Optical cooed a bit when she put them on me. That's good. They'll probably make my writing read smarter. That's good.

*
*        *
Much is made re: cigar band collections. I myself have a Manischewitz bottle crammed full of the things, with plans to photo-book 'em. Also, I have a great foot ribbon collection of which I am in some ways more fond of. I am open to ideas of what to do with them, and please gentlepersons, keep said ideas clean. I'm thinking a quilted pillowcase. Not entirely really.

PRE-LIGHT
Band is a bit crookedly affixed. Can ya make that out from the pic above? Foot ribbon is extra satiny special. Band is milk chocolate with dark chocolate swirls. A burnt sienna tone is underneath. Over-top is a semi-gloss finish. Seams are tight and even, sans in one tick of the 2/3 due to a slight vein impediment. Veins... only two worthy of note, but big and run the shaft fully. Top-leaf is yellowed around thems. Slight water-mark near the foot. Speaking of foot, dull auburn with menacing brunette low-lights -- medium to medium+ bit of uneven packing. At the other end, we get a nicely crafted cap with a vein stickin' it to a bit of the shoulder.

Hand-feel has good weight, and the slight press smooths the veinage some, but it's still a thing. Nicely balanced heft. Packing is an even medium with quite a nice spring-back. Schnozolla indicates cedar and a slight citrus-laced cocoa. At the foot are some cool spices. "Cool" as in refreshing. A lightly fragrant bittersweet spice rack.

Draw is a medium resistance, and the lighter side of that spectrum. Cold tug is much citrus milk chocolate, yes? Some pale creamy nuts. Spice rack has a floral vibe. Nice. And we --


LIGHT
1:15pm
Toasting the foot is a pale nut tray roasting. Hint of citrus tanginess. Some sweet vibe. First hot pull is very cashew, saltedly so. Lingers into the creamy sweet mouth-feel. Spices are there and balance well. That spice rack kicks into red. Chocolate is high in the middle and milky. Coffee is low in the middle. Second hottie is retro-haled and cayenne is a new red spice additive, and too high-lighted. Once that drops off, coffee comes up higher and the aforementioned sweet vibe has a tick of cola quality. Third pull is more a' the same and a settling in.

Burn is a bit wonked and I wait for it to fix itself, but it has a short leash as its strayed a good bit already. Huge smoke out-put of thick white goodness. I just was forced to retouch and when I did, ash clumped. Same draw resistance. Medium+ profile. -Medium strength. Quick pace. Ash was a failed sheath before dumping -- mainly white and up to some pale grey.

ACT I
The ash which dropped exploded to powder upon hitting the deck next to my left Doc Marten. Readers love details. Spices fall back a bit and chocolate picks up some nice nuances of cream and a touch of cashew. Citrus laces, as well. Interesting. We've settled, but not into a hierarchy of notes -- instead, into a pattern of movement. There is an underneath of complicated sweet hay this all plays out on. All flavors sorta drip into it. I'd say cascade, but that might be hyperbole. I've yelled a zillion times that I would die a thousand miserable and torturous deaths before resorting to the Devil that is hyperbole.

Burn is troublesome if not worrisome. Top-leaf ignites at different temperates, it appears. Ash is pearl white in spots but not successfully sheath-building. Flavors continue to dance, although at a pace far slower than the burn. A bit off-kilter there. The cola flavor get a fruity injection of a berry vibe. Mouth-feel isn't as creamy as the start promised, but is nice. It does err a bit toward dry of medium. Nice slight tingle. Lips are salted butter.

For all the smoke-out-put, and there is a ton, the room-note is quite softly mellow and unchanged. Very kind. Bit of a canoe threat here, that doesn't respond to correction. Very weakly attached ash, which I roll off as a precaution. Quite aerated packing at the burn. Burn-line is thin, but wrapper seams to want to pull from binder there, leaving a charred bump of a ring. After a lot of Djeep, I get to mainly even.

At the end of the opening act, profile is a medium+ and strength is now medium. The cola is now making me sense a fizziness on the tingly mouth-feel. Flavors are all up a tick or two and as of yet, still no hierarchy. On a retro-hale, cayenne is king. Hay under-note gets a barnyard addition. Spices darken.


ACT II
A toast comes in now. Rye bread and near a malt. Ash picks up some charcoal flecks. Coffee gets sweeter. Rye toast gets buttered. I get a tick o' nic. Finish has a new found dessert quality and longer legs. There is vanilla there now. Heavier cream and a nougat are there. Spice notes on the draw get darker in balance.

Ash clumps off if ya softly whisper "boo" in its general direction. Burn starts to go fercockt again, this time as a direct result of a vein lifting away slightly. Darker spices tingle my tongue more noticeably. Mouth-feel is an odd dry-yet-drooly affair. Packing tightens at burn-line but loosens beyond that for an inch. No pearl is left on ash. Strength is a medium+ to match the profile. Cream is toasting and harder now and nougat marries to it. I re-touch burn quickly, as it's proved to not self-correct.

Retro-hale has an odd effect of blocking up my nose. I saline-spray it out and soldier on. Oy vey, the ash is a powdery mess. My desk is an ashtray -- generally speaking. But more so now.  Coffee with cream and sugar is up-top with cashews now. Middling is a complicated if not complex chocolate with some malts attempting at coming on. Underneath is unchanged. Citrus note, orange, laces throughout. Spice exists only as a tingle'd tongue-tip. I'd retro-hale to find it, but nah.

Pace and smoke out-put each slow. Note smooth out and smoke feels almost refreshingly cool. Strength has downed a full tick to medium. There's a hint of clove at the immediate draw, as the final act is nigh. I state cautiously that burn has found even, and whenst I do -- I find that burn has went entirely out. I'm a bit nonplussed. Can one be a bit nonplussed? Can one dabble in fanaticism? Huh.


ACT III
Purge, re-light. 50 minutes in and I'm here at the 3/3. I am more ash than man now. I'm glad I didn't don my Sabbath suit yet, as I'm soon headed to Synagogue. To me a "Dry Clean Only" label reads "Don't Clean." Packing, as I check it, is firmer than evah.

It strikes me that the malts here (chocolate) are quite reminiscent of a Gurkha. No, I cannot further quantify that statement. I accidentally retro'd on the re-light and there was a white pepper and graham there. I just now remembered I'd forgotten all about the rye. Bye, rye. Buy rye. That reminds me, I need to get bread. I'll stop at Albertson's after shul.

Coffee comes back and we're back to the opening act's delivery. No true hierarchy. Politically, I'm down -- but in my cigars and in my bed, I like to know who's on top. The El Centurion plumes out smoke again and its pace doth too requickeneth. Spice is back but less dark and quite subtle. We are also more toasty than creamy, but still sans bread. The soft press holds exceptionally well, smoke stays very cool.

Floral vibe sidles up to the hay underneath... then ticks up. Toast returns as the band come into view, un-rye and buttered. Ash darkens again and is a bit more robust, then suddenly new growth is a pearl return. We'll finish off with graham and cloves upping, malt vanishing, a ginger vibe sharpening the mouth along with citrus going to rind. Kinda an odd and not wholly entertaining tale.

Pace slows. A seam loosens and burn goes sideways. Re-touch. Clean finish throughout, verily at the end. Some yellowing of smoke and loosening of pack.

NOTES
I wouldn't say linear. Unless attaching helter-skelter to that term.


EPILOGUE
2:30(ish)pm
I'm a big, very big, MF fan. To be perfectly honest, my fandom could use a shot in the arm, gentlepersons.