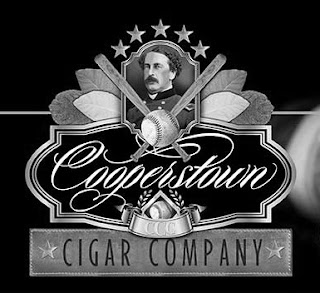 PROLOGUE
Is it a secret that I'd love to one day have my own brand? Gosh, I hope not. I would begin, and very possibly end, with three vitolas: Lonsdale, Corona, and Churchill. A classic Churchill. One of my growing number of industry pet peeves comes in the form of a 50RG Churchill. I'm less than thrilled with +50 Robustos as well, but too care infinitely less re: that format.

I'm not convinced, nor am trying to be so, that the entire previous paragraph had any merit whatsoever, so I'll rapidly cut to --

Sample courtesy of the Co.

PRE-LIGHT
The Americana history of baseball centerpiece, flanked on one side by a tobacco field and the other, by a baseball field, makes for an interesting band. Nicely embossed and good paper stock make it even nicer. Good work, there.

Let's look now, under that and at the top-leaf. I notice two things immediately. 1) an uneven complexion. 2) crimped yet thin veins which run the whole 1&2/3 of the offering. Main hue is a workboot suede with caramel undertones. Over-top is a greenish tone which brings to the table that uneven-ness. There is some slight marbling over that a green coffee bean on it's way to the first cracking. Seams are fairly tight and quite even. Cap is a mess. Crooked and a loose bit of shoulder leaf is broken free and then pasted down out-of-place. Tobacco at the foot is a light+ density and quite airy, actually. Auburn-colored and matte finished. Light trace of oils are over-top it all and form a less than even sheen.

Hand-feel is a very nicely balanced yet feathery thing. Packing density is even throughout and set to a -medium but still featuring a lively spring-back. Kinda a dry feel, as the slight oils don't transplant to my mitt. There is a sharp vein ridge (a third one) that impedes my hand a tick.

Schnozolla-wise, there is a sweet hay and mild tobacco on the shaft. Perhaps a hint of semi-sweet spice rack. Much more of the spice rack is at the foot, as is dulled by a hint of cereal grain and dose of sunlit earth. I cut once again with my gifted Xikar Xi2 (full review coming soon) and, as always, I schlep it out of its pretty box, line it up, and clean cu-- hold on! A snag??? I examinate: big ol' stem. Poking right out the top. I get out only the impeding tip, and notice a quite uneven packaging. I try a cold pull and get a minor sugar sweetened cinnamon blast with sweet hay and mild tobaccy under-tones. On an at least medium+ resistance draw. Perhaps closer to a -firm, since med+ is within my comfy range and I am not comfy, gentlepersons. Especially given my Shortstop draw. Although in all fairness, the Stinger was a nice smoker.


LIGHT
10am
A classic Churchill demands a classic matchstick light. Woods and leather with an under-note of spice rack. That's the foot-toasting aroma. First hot draw is honey roasted peanuts with a middling of spice-rack and backing of sweet earth and hay. Draw is -firm and takes some work, but the smoke-hole doth get smoky. Finish has a clean almost citrus glancing but just as almost chemical vibe to it. Mouth-feel is crisp and nice moisture-wise. Second hot one is a retro-hale on a medium+ draw and high-lights that vague citrus/chemical with perhaps some white pepper backdrop. Once that clears, you get a nice spice rack and toasting honey roasted peanuts. Middling is showing vanilla as the driving sweetness. Some greenery is appearing in the finish and on the less sweet now earth and hay backing. Third hottie is a confused nut. No judgement, we've all been that gentleperson. Citrus vibe hides, but the slight chemical trace hides less.

ACT I
Burn is quick and mainly even with only the slightest wave. Line is medium thickness. Ash is an ashy salt/pepper 50/50 loose sheath. (Cue getting schmatta out from back pocket.) As I place the Cooperstonian in my $0.99 Walmart tray, the ash drops in a loosely powdered but cool clump. Remaining ash is darker and looser. Burn is even and only slightly ribboned. Packing has softened two ticks about an inch after char. Smoke out-put wavers from -medium to medium+ with a nutty and vaguely leather room-note of mainly semi-sweet tobacco. Draw is up and down from med+ to -firm. Smoke gets in, though -- and mostly evenly so.

That chemical vibe was apparently a predecessor of the green note. Which is still well noticeable from draw to finish. Primary flavors are now a creamy almond note and mild tobacco. Middlings are toasted sharp vanilla on a white bread toast display. Hay and earth are underneath it all. Green is a tad distracting. Finish is sharpened by that green and is a toasty vanilla sweet tobacco core. Stogie. I dig! Again, though, check the MSRP and too, the gift potential of the purdy boxes. Profile is a -medium and strength ain't moved the strength-o-meter.


ACT II
Ya know, gentlepersons, how I oft recommend the retro-hale? Yeah, don't do that here. It's where the Cooperstown Cigar Co. put the green. No biggie. Just very note-worthy to the smoker. Draw seems to have settled in the medium+ range. A tick past comfy but too, acceptable. Flavors seem to be digging in their heels, and a nicer experience is setting in sans green retro-ing. Smoke out-put is thickening and antique white. Maybe eggshell. Yes, I am a heterosexual male. Thanks for asking. Pale ecru. Chew gets a tad spongy, as doth draw. Macaroon Cream, that's the ticket.

I dare a retro-hale. Actually I forget not to after a quick purge and: white pepper. Coarsely ground, yes. But green, no. Makes a nice addition to the profile (which is unchanged) but I wouldn't over-do it with the nose-smoke.

A sour note comes in now, again in what can only be described as chemical. It raises the moisture level of mouth-feel to a near drool, even as it dries the palate. It's green. Or at least settles to that as the prominent note of the medium+ length finish. There are some leathery oils trying to happen, but the green ain't letting it. It's also hampering the overall cream component. Vanilla hides. Almonds sharpen to be heard. Toast is nice and as of yet, unaffected. Burn is a tad troubled by a vein but prevails minus retouch. Ash won't build, but the latest clump on my schmatta -- okay, next to my schmatta -- FINE, on my keyboard, seems more dense.

Some saltiness spins off the green and sets into my lips and tongue. Body seems to be thinning out. Chew is wet. I purge and let sit. Room-note is a simple somewhat sharp tobacco.

ACT III
At the final act's onset, we begin off a two-minute cooling. The Cooperstonian stays lit and ready-a-go. Smoke is white and thicker. Sour bite is still present, but less so on the almond. Toast plugs along near the radar's bottom. Vanilla is trying. A sweetness is attaching in higher doses to the hay and earth underneaths. A dimension has been lost though, as the middle is somewhat vacated. Finish is a sweeter thing but still green. Cream is not being allowed to occupy the center, for the greenery.

Construction has improved firmness and is holding a nice even burn. Swampiness has abated after another purging. It clears the notes, but the driving note remains green. Vanilla roasts on the finish. Strength ticks up to a mild+. Profile -medium. Toast soars now. As the band approaches, it becomes primary next to a mild but not smooth somewhat oat-laced tobacco. Underneath is earth and hay. In the middle is green with hints of nuts and vanilla. A failing cream. Finish is a simple extension of the middle. White pepper is gone from retro-hale, actually -- its coarse ghost vibe remains.

NOTES
All told, a lackluster line-up from Cooperstown... not a Murderer in the Row, or at least none I've been privy to Not a round-tripper in the bunch. A nice enough gift idea, though -- for the baseball/cigar fan in yer life. However, mayhap not so much for the cigar/baseball fan in it. I do not like writing less than enthusiastic reviews; but too I call a whiff, a whiff. Sorry.


PAIRINGS
Chili dog. Not at all sure why that lept to mind.

EPILOGUE
Noonish+
I want to hear some baseball on the radio. I am ready for spring to have done sprung.