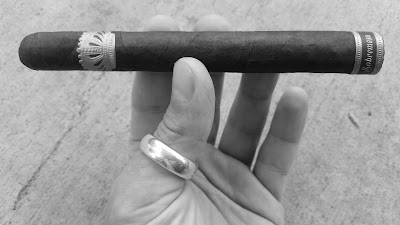 PROLOGUE
I reviewed the Torpedo Tiempo format of this offering HERE. I chose to not go the Redux route however, as I feel this Cervantes Fino worthy of its own full review and write-up in light of reasons. "What reasons? You may ask; to which I may reply...

PRE-LIGHT
Veins, nigh verily so. They are a visual impediment only, as no ridges or overly broad arteries lead to potential burn issue thoughts. Seams are tight and even. The impediment can therefore be seen as germane to a plot of hand-crafted artisanship, gentlpersons. I kinda dig the band but would like to see a name embossed thereon. Complexion is a tick uneven but from the same pallette. Chocolate brown with a peanut butter under-belly and slight reddish hue beneath a' that. I daresay it's visually complex, this Sobremesa. Sobremesa, of course, translates to "Venti" in Starbucks Frentalian. Cap is affixed well and seems trip'd. Foot tobacco at opposite end of shaft is mousy brown mainly, with a dirty blonde tick or three. Packing there is interesting to the eyeball. Medium dense core and -full outer layer. Thin tooth-trace and nice water-based pomade sheen over-top.

LIGHT
Toasting the foot brings around aromas of earth, aromatic tobacco, leather, and hardwood -- served up in a nice 'nuff melange of notes. First hot pull is creamier than expected and hints at pulling up a coffee note to accompany itself. Very earth/tobacco-centric. Leather under-belly. Spice rack is mid-middlings and muffled with some dust. Cocoa is upper middlings to primary. Settling... settling... some artisan bread... settling. Second hottie is retro-haled and spices, white pepper, and a dropping to the palate of a pale dried fruit. Cream picks up on mouth-feel. Third hot pull is... I wanna say I taste papaya. As well as all other notes listed. I'm getting the impression of theater-goers filing to their seats...

Ash is white and forming a loose sheath, sans flaking. Line is even and thin. Packing has softened a tick off of light, not too much though, and only a half inch down. Draw has found some nice tension and is at a medium+ resistance. Smoke out-put is steady. Room-note is sweet creamy tobacco and leather. Rich, minus being heavy. Profile this early-on is a medium, lettuce say. Strength has nudged but not moved the dial. A seam is a tick loose a bit ahead of burn, but holding.

ACT I
That papaya thingy is gone, but the less-descript pale dried fruit stays. Earth joins cocoa/chocolate in primary. Wood becomes cedar and spins with tobacco in the middlings alongside and atop of bakers spices. Some nuttiness is a high middling, but not the showcase yet. Underbelly is leather laid out over more earth. Earth there is interesting, as there is a slight floral quality. Creaminess weaves throughout the profile. Coffee keeps flowing and ebbing in low middling. Chocolate soars now, at an inch in.

Burn is a bit wavered, but not requiring aid. Ash holds well and unchanged insofar as complexion/construction. Packing has re-firmed from match light. Mouth-feel is perfect moisture and receiving some clarified butter addition. Fruit is now a decent hint on the chocolate note, and black pepper joins white and sautees. A mace-covered nutmeg peeks out of bakers spice. I sound like a pretentious schmuck, sure -- but this Sobremesa is quite the complex affair. Profile is a nigh medium+ and strength a mild+.


ACT II
Mace and nutmeg get a cardamom finish all their own. I particularly get this effect off a retro-hale, which I've been doing more oft than not. Layers of chocolate and cedar are found there as well. Earth and aromatic tobacco drive from under that. Pale honey-roasted nuts. Floral notes. It's less of a hierarchy, this Sobremesa -- and more an egalitarian jamboree. Leather has some rehydrated pale fruit drip into it at the under-belly. Spices lose much of their dust and really become quite intricate. They make me think apple pie. I like thinking apple pie, gentlepersons.

Construction and combustion hold true and perfected. Line is dead-even. Mouth is a bit of flaky buttered pie crust with a slight cinnamon tingle. Perhaps some white pepper. That white pepper is braced by a pinch of black, sauteed as ever. At the mid-point, there is a greater emphasis on aromatic tobacco. Finish is clean and sweet -- thinly enough to allow a wow amount of nuances of spices. -Long legs there. Nice set a' gams. Muscular yet feminine... this Dunbarton Tobacco and Trust wears stilettos. Classy ones. Not stripper shoes. No one is perfect.

Cardamon steps up and continues its role under a spot-light. Chocolate gets the nuts along with a greater fruitiness. Ya know those Cadbury Fruit and Nut Bars? Yeah. In short, it's a desert stick, this Sobremesa, but not of a diner varietal... there's a pastry chef in the kitchen... and she's gorgeous. Insane, too. I'm slobbering a bit. Burn slows and cream is thickened as the final act draws nigh. The new zetz of cream seems to bee-line to cedar, as if more complexity was needed, oy gevalt! Smoke doth poureth.


ACT III
Aromatic tobacco gets a touch of white tea leaf. Seams continue to loosen a tick ahead of burn, but hold and extend out a strong 'nuff white ash from an even and thin line. Some tannic quality is coming on at the immediate draw. Can I just shut up now and give this thing an A+? Probably, but I do love prattling on...

Fruits are dried pineapple, a lightly candied apple flesh, and plump white raisin. Peppers are vastly white with a slight black bracing; sauteed in butter. Chocolate is that garsh-durned Cadbury Fruit and Nut Bar, as mentioned. Blonde coffee is on to stay, with cream -- some sugar. Seasoned aromatic tobacco, as described already, and earth fill out middlings. Fruity leather under-belly with white wine dousing. Cedar is creamy and spiced just 'nuff to not cloud.

Beautiful construction/combustion notes. Medium+ profile, robust yet gentle. Strength is a kindly medium. Now, I shall shut up. There's some rare Pacific Northwest sun hitting my front porch -- I'm going to it.

NOTES
This Sobremesa sounds like a tune sung to one's own palate. Thankfully, I apparently share the singer's ears. As far as mixed metaphors go, I think that's apt as all get-out.

Weak coffee or strong tea, milk and sugar. Loganberry Manischewitz. Really, though, pairing is very optional and not necessitated in the least. Enjoy the stick, gentlepersons. 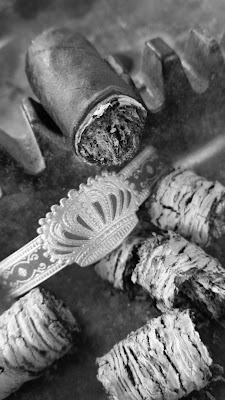