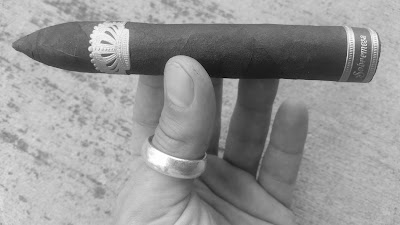 PRE-LIGHT
Minimal veins, tight even veins. Check, check. The complexion is milk chocolate, but the texture screams wood. Toothiness is very much a thing. No real under-hue, perhaps a brick red vibe. Light and even oils up-top over some faint full city roasted coffee bean. I love a foot-ribbon, am generally nonplussed by foot-bands -- but this one is quite nice. Primary band is a new classic bit of icon. Foot tobacco peeks out at a mousy auburn toned medium+ density with slight ticks of dirty blonde and nigh brunette. Cap is nicely 'nuff affixed, but the point is a tad loosey-goosey frayed. Quite possibly via shipping. For all its tooth and grit, it doth state stately.

I Xikar Xi2 the heck off the tip. Cold draw is quite cocoa led tobacco with a red spice backing. Wood vibe. No nuts. Tension of draw is an effortless medium. Cold finish is a pleasant tobacco with sweet cocoa under-belly.


LIGHT
Wood, leather, and a crusty toasted artisan bread. That's what I get re: aroma as I toast the foot of this Sobremesa. First hot pull is a stiff dose of hard notes, riding on a soft and inherently sweet aromatic tobacco. Those hard notes are led by a surprisingly bracing cocoa and nearly sharp cedar. That tobacco is your middling. Hard notes, primary. Underneath is a earthy quality that seems to be quite complex and toasty. Second hottie is retro-haled to a high-lighting of the cocoa cedar top-note tandem. Too, there is a white pepper therein. Drops from nose to palate as a very nice natural aromatic tobacco with some wood vibe to it. As the finish approaches, a nutty note -- pale flesh'd and roasted -- comes in. Finish is a medium legged thing and a very sweet classical tobacco. Third hot pull is quite that nuttiness, as the note pushes the ceiling of middling. Tobacco extends there as well. Cocoa in the primary softens a tick with a dollop of cream which hits the mouth-feel in a swell fashion.

Big problemo, gentlepersons. I shall simply include a photo: 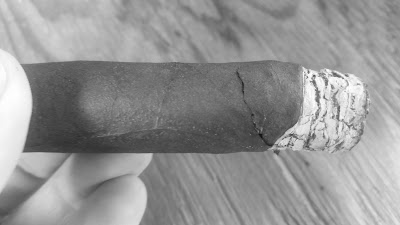 That aside, draw is dead even insofar as tension and out-put. Room-note, off a full medium out-pour is quite woody leather aromatic tobacco. Packing softened nil against the light and onset of burn. Burn-line is a razor-thin thing, but running ahead along one side due to crack. I Djeep my way through... hopefully. I allow it a rest in my $0.99 Walmart tray, lagging bit of top-leaf pointed downward. I'm guessing that the crack will be smoked though in a speed on par with any Whitney Houston/Bobby Brown house-party. Foot-smoke pours white and thick. Pace is a tad quickie.

ACT I
We look good to go. I'm never certain how to grade these occurrences. What happened and where along the cigar's journey to me is unknown. Lettuce agree that house rules state "First one's free," as to hiccups, buggabbos and monkey wrenches.

In a nod to being well-constructed, the Sobremesa is ready to toke off a near two-minute rest. Some nice creamy bits continue to flex. Nuts join cocoa and wood-turned-cedar up-top as a well balanced primary trio. Middling is aromatic tobacco spinning off inherent sweetnesses with a coffee and cream nuance. Some sweetness is via a lively dry hay note. Underneath is earth, but delicately delivered. Delicate, but more than sturdy enough to tote the profile. Intricate. There are some red spices in there. Some cardamom which can be seen on the retro-hale with an amplification of top-notes. A hint of apple core. Profile itself is a medium and classically so. Strength is a mild+. Mouth is perfect moisture and creamy but not desert-ish in texture.

Packing has softened a tick. Burn pace has slowed two ticks. Ash is mainly white with medium grey dalliances, and forms a loose but not flaky sheath. A near stark menu, but intricately delivered. Simplicity is elegance here, gentlepersons.

A seam widens a 1/4" ahead of burn, whose line has yet to find even, entirely. Line itself has widened to a medium width. I roll off an inch of ash -- cool to the touch and of a dense talc consistency. Cedar and cocoa begin to weave up-top. Nuts go back to high middlings. Tobacco is mid-middlings and fills out wonderfully. Under it is a coffee and cream and orange blossom vibe. Earth backing is sunny and complex as previously mentioned.

Combustion is an ongoing issue, as pictured, and a healthy re-touch is needed.
Construction is above average as loose seam tightens and draw is fantastic. Profile is a unchanged, as is strength. New ash is a pale grey near silver and sheathing on nicely. Flavor notes are so in my wheelhouse, I think Mr. Saka blended this for me, maybe -- such is my level of egomania. Palate does dry a tick as suede again finds leather and an oak note sidles in. Smoke out-put lifts to a hide-a-ninja level. Apple core is an additional apple wood. Cardamom seems to have fled. Cocoa is somewhat overcome by cedar, but still a good presence. Very woody now; which plays well with black pepper retro-hale. All is on a stiff cream. Cream meets coffee & cream and some sweetened spice rack on the tobacco-led finish -- which grows its legs to a -long. Cocoa wraps around from top to bottom now, of the end of finish. It appears underneath in a smooth milky manner... almost whipped.

An inch of nigh silvery sheath barely wants to roll off in my tray. White pepper goes muscled to my tongue and tingles nicely. Flavors warm in toasty notes. I re-touch somewhat preemptively as we head into--


ACT III
Cardamom is back on the shoulders of a thinner orange blossom honey note. They play great with the apple core/wood. Aromatic tobacco gets this sweetness oozed into it. Chocolate up-top gets a hint of pale fruitiness -- a moist white raisin. Earth wraps around similarly to the chocolate and is an addition to the primary. Cocoa and raisin and nut are a trail mix thing. Creaminess fades, coffee is faint blonde. Apple notes soften and find remaining red spices, take on a baked able vibe.
Mom's idea of desert was sprinkle an apple with cinnamon and sugar, toss it in the (toaster)oven. That. Except this is good. Combustion is a pain, unfortunately, and I again re-touch. As the band doth approacheth, smoke stays cool, daddy-O. Ash is now medium-grey and tight ladder-rungs. Retro-hale sweetens but too hits the palate a tick dryly. Sans combustion woes, I have utterly enjoyed this Sobremesa and its delicate intricacies. I do feel as though it could have used some more aging, however.

Through the band, all notes to construction hold fast, and smoke never raises its temp. Blonde roast flexes at the band, as does the cedar, coffee, and earth. Still all at once delineated and occasionally skillfully tandem'd. At the nub is a Pleasant white tea leaf addition.

NOTES
My final grade should tell you what I thought of this blend; in light of substantial burn issues. I should also mention my schmatta -- it was unneeded. Profile is an absolute delight in a very classical sense.


EPILOGUE
Thank you sir, may I have another?
Head on over to Cigars City fer yer's.


EDITOR'S NOTE
Due to brain-fart, I initially titled this blog Cervantes Fino instead of Torpedo Tiempo. Apologies abound, gentlepersons. It will unfortunately appear wrongly, forever more, in the post url. Irks me, doth it.