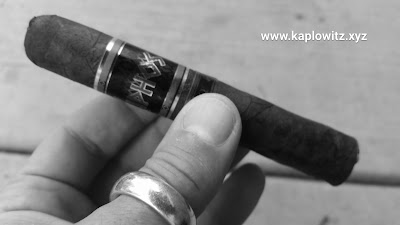 I
Lettuce begin, gentlepersons, with a brief bio of [Curly] The Super Stooge [more will be revealed in a few ticks]: "Curly Howard’s real name was Jerome Lester Horwitz. He was born to Jenny and Solomon Horwitz on October 22, 1903 in Bath Beach, a summer resort in a section of Brooklyn. He was the fifth and youngest of the five Horwitz brothers. Curly’s interest in show business grew as he watched his brothers, Shemp and Moe perform as stooges in Ted Healy’s act. After Shemp left the Healy act, Moe suggested to Healy that his kid brother Jerome was available and would make an excellent replacement for Shemp." - threestooges.com

Black pepper, hardwoods, espresso beans. Tongue tingle. Hot dang, gentlepersons -- one hot pull in and the legs on finish ain't stopping. Spices are ghosting my nasal cavities and I didn't retro-hale. Another pull. I was trying to outlast the finish before pulling again, but it weren't quitting. Heavy butterscotch and cream additions with a purple fruit in the under-belly compost. Tons of smokey-smoke. Stiff leather and sweet hardwoods room-note. Palate is a-tingle.

Today, gentlepersons, is the birthday of one Mr. Jerome Lester Horwitz. Known to his mishpucha as Babe; known to you and I as Curly. That Curly? Soitenly! Being so, I shall be sprinkling this Xiphos Maduro cigar review with some Super Stooge factoids (all previously published at www.kaplowitz.xyz and used herein with my expressed written consent). More dark toasted cream. Some black bread. Espresso is ground and pulled and poured.

Line is a tick wavy-gravy, but nothing egregious and ash is pale pale grey. Some flaking there, some tooth from the top-leaf, somewhat loosely build in ladder-rung fashion. Construction is a tick softened about 3/4" off of char. Burn-line itself is razor-thin. Draw is a medium+ tension and verily satiating to ye olde smoke-hole. Cedar. Edible flowers from the top of a fancy cake with a tick of icing or frosting left on them -- according to yer geographical linguistics. I like Twinkies. Have ya tried the chocolate ones? Finish sweetens. A real power stick, this. Medium+ easily insofar as body/flavor. Medium strength and climbing.

"If we wrote a scene and needed a little something extra, I'd say to Curly, 'Look, we've got a gap to fill this in with a 'woob-woob' or some other bit of business.' And he never disappointed us." Jules White (Ted Okuda; Edward Watz (1986). The Columbia Comedy Shorts)

"If we were going through a scene and he'd forget his words for a moment, you know, rather than stand, get pale and stop, you never knew what he was going to do. On one occasion he'd get down to the floor and spin around like a top until he remembered what he had to say." (Moe Howard on A&E Network's Biography)


II
"When Curly was 12, he accidentally shot himself in the left ankle while cleaning a rifle. Moe rushed him to the hospital and saved his life. The wound resulted in a noticeably thinner left leg and a slight limp. He was so frightened of surgery that he never had the limp corrected. While with the Stooges, he developed his famous exaggerated walk to mask the limp on screen." (Joan Howard Maurer; Jeff Lenburg; Greg Lenburg (1982). The Three Stooges Scrapbook)

Pace seems a bissell quick, we shall see. Burn is evening out on its lonesome. Draw is a medium+ tension and smooth. Seams are quite tight. Nice construction, especially in light of packing re-firming. More sweet flavors now -- all is dark and heavy. Texture is smooth and of great moisture on a tingly mouth-feel. Extraordinarily long bittersweet finish sans any chemical tendencies.

Curly was quite the athlete. An accomplished ballroom dancer and basketball player. I know that at 5'5", it's hard to imagine Curly on the b-ball courts, but it was a different game then. One generation+ later, my dad was a touted center at 6'1" tall who played with his back to the basket. Some tidbits put you in a real sense of an historical moment, huh? As to his dancing chops, when you look at his physical comedy -- it's all there.

Black Forest cake. A separate dose of cocoa butter. Some root beer candies. -Full profile and strength to match doth hath me schvitzing, gentlepersons. Burn is even and draw smooth. A bit of an Almond Joy vibe. Mainly, the new player is death by chocolate. Finish lasts at nigh full-strength between pulls. Flavor monster. Smoke out-put flows massively. Definitely a stick that'll sit ya back via all yer senses.

Mouth-feel is on the wet side, but not toward spitty. "Tingle" don't do the tingle justice... that said, it ain't throaty nor palate-grating. Cream comes on mo', all roasty-toasty. Espresso dials up. Woods dial up an are fairly interesting: hardwoods, seasoned and riding on a creamy sweet cedar cloud. Heavy, heavy stick.

Curly was an introvert in his personal life, who came to life when on-stage, when drunk, and in the presence of big bro Shemp. He felt free to be himself around him, unlike his other big bro, Moe -- who oft wagged a quasi-paternal finger at Curly. Moe went as far as filing Curly's taxes and handling his finances and business affiars, for fear (well-placed) that Curly could not. It is worth noting that Shemp was a Hall of Fame neurotic, so judgement of Curly's own bugaboos was most likely scant. I picture a camaraderie therein. All notes to construction/combustion hold, and nicely so. As the final third looms nigh, black pepper zetzes with a red spice under-belly, led by cumin and cayenne.


III
Curly had thick, wavy chestnut brown hair and an impeccable handlebar moustache, prior to Ted Healy insisting he shave it all off. Curly was quite self-conscious about his cue-ball scalp, and usually wore a hat when he was in public. He especially felt it when around the fairer sex, but to be blunt, he'd have been better off if it turned their gaze away a bit more often. A bit less "In demand socially," as Moe put it, might have worked a wonder or two.

"I had to shave it off right down to the skin." Curly lamented (Maurer, Joan Howard; Jeff Lenburg; Greg Lenburg (1982). The Three Stooges Scrapbook)

Butterscotch, verily. Red sweet syrupy wine -- Manischewitz? Yup, Blackberry... but 'nuff 'bout pairings. The flavors are all in a mosh pit. Compost under-belly takes up more real estate. Floral notes and fruity bits goeth there. So much smoke. So much flavors. Somehow not over-bearing, though. Humsoever, I do remember taking a phone call a bit ago... can't remember from whom... or what was said. Is it hot in here? I'm outside? Schvitzing. Autumn. Coconut. Merlot. Verily, Act III is all about leather and leathery oils and how they play with the rich black compost -- sandwiching the other flavors 'twixt 'em.

Curly Howard: Canoodler Extraordinaire. Perhaps it's more apt to say women were amongst his favorite forms of self-ruination, having been married four times. Throughout his life, Curly had a weakness for wine, women and song, and his wild life eventually did him in.

"Moe urged Curly to find himself a wife, hoping it would persuade his brother to finally settle down and allow his health to improve somewhat. After a two-week courtship, he married Marion Buxbaum on October 17, 1945, a union which lasted approximately three months. The divorce proceeding was a bitter one, exacerbated by exploitation in the local media. After the divorce, his health fell into rapid and devastating decline." (Joan Howard Maurer, Jeff Lenburg, Greg Lenburg; The Three Stooges Scrapbook 1982.)

For all the notes, the landscape is quite compressed. A very active and focused delivery of quite heady flavors and strength. Body acts to cushion this in a heavy cream. This Xiphos is really a heckuvan experience. Construction/combustion mainly hold lest shaft and nub smoke heat up a half tick. It's as germaine to the plot as a smoking gun after a shot fired. A full profile shows me the door. BOOM.


EDITOR'S NOTES
Please to read my full list of Ten Things You Mightn't Have Known About Curly HERE. I left off numbers seven through ten here.
[11/23] I review the Toro format of this blend HERE] 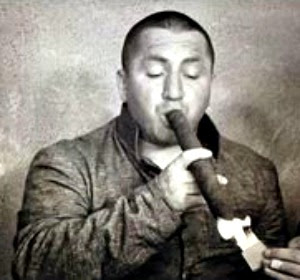