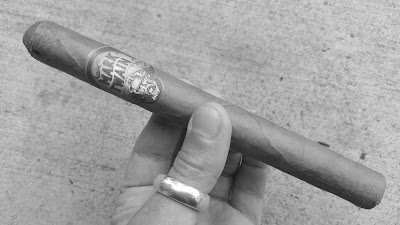 PROLOGUE
The mint clippings I've propagated in an Old Fashioned glass fulla water have taken root. This changes everything.

Pick some up at Cigars City, whom I thank for the sampling.

PRE-LIGHT
Peanut butter colored. Two distinct under-tones, the top being a greenish hue and the under-belly of under-belly being a burnt sienna. Hi. My name is Kaplowitz and I thank ya for stopping by www.kaplowitz.xyz, where every day is an homage to Shemp's last one. No thick veins, but a smattering of sharp ones crimp the top-leaf and pucker its nice sheen. Seams are shy of tight, but evenly so. Some lumps can be eyeballed along the shaft. Cap is affixed well and seems so in a double manner. There is a slight hiccuping at the shoulder, but looks to be from handling rather than factory. Foot tobacco peeks out at a medium+ density and is several shades of auburn.

Hand-feel is a solid tick and a half toward light for a monster vitola, but the balance is nice. The crimped veins happen to not be wherest my hand doth lay. Smooth and dryly oiled with a trace of soft grit along the shaft. Charmin squeeze test shows a medium to medium+ density of packing. Read: soft-spots -- although nada egregiously. Schozzing the thing, I get some oak mixed in hay with a slight caramel nod. More caramel at the foot, more wood, and some lightly spiced leather.

I employ my gifted-to-me Xikar Xi2 and a cold draw is a fairly low medium in terms of tension. Cold draw is caramel, wood, leather, earth, no particular order. Hint at weak coffee with cream and sugar -- mostly cream. Would ya like a lil coffee in yer cream? Another cold pull is verily more sweet oak laden.


LIGHT
Toasting the foot is an EZ thang, gentlepersons; even out-of-doors and off a wooden match. Oak and leather, each sweet, fill out the aroma. Light catches well 'nuff and a first hot pull is a light aromatic tobacco leading notes sweetened by both sugar and caramel. Them notes are an oak and blonde coffee in the upper middling. Mid of middling is a sweet creamy hay. Lower middling is all a creamy leather. Under-belly is dirt/earth and it wraps around over-top to accompany the tobacco there.  Second hot pull is retro-haled to showcase a creamy and finely ground white pepper. There's some white bread toast there, as well. Third pull adds a peanut vibe to the caramel and if we ain't Cracker Jack, we are close, gentlepersons.

Ash is pale to medium grey in a marbled fashion on wide ladder-rungs. Burn-line is a medium and is slightly ribboned but mainly even-ish. Draw has firmed to the tenser side of medium. Good smoke to smoke-hole. Foot-smoke is a medium volume, room-note is a light aromatic tobacco with a sharp hay quality. Some leather, mayhaps. Pack has softened off burn, and by a good two ticks, about 3/4" ahead of char. Finish is table sugar and light tobacco and lasts softly until the next tug. Mouth-feel is excellent moisture. I daresay these Mark Twain cigars might unseat Casa de Garcia as my out-of-pocket everyday... if it ever (Hashem forbid) comes to that.

Burn is a little quick, and that combined with a light hand, makes me need to warn ya of over-smoking.

ACT I
A salted citrus note comes in. This causes oak to sharpen nicely even as it retains a sweet cream influence... that influence weaves through the entire -medium profile. Strength? Nope. Ash seems to be firming up, but I have a schmatta at the ready. Burn line has evened further. Combustion is quick but good. Construction is sponging a tick, but seams and draw hold fast. Notes are unchanging, save an occasional soft shuffle. I'm quite enjoying this stogie, gentlepersons.

The ash, now paler, lilts at an inch and a half, and I roll it off into my $0.99 Walmart tray, black plastic. More cream, slightly more leather-cum-suede, and on the retro-hale, white pepper. A nice flexing. Mainly still a soft and mildly aromatic tobacco lead, but not so much in a primary manner -- more of a core. The other notes circle in said core, spinning out on occasion. Palate is a tick sugar-coated, but nice. No bite thus far, which is a main concern is Stogieland. Too, combustion (slowing) is praise-worthy and construction (softening) gets the job did.

I keep eyeing the band. I like it. Mr. Clemens was a good guy. History has white-washed his radicalism into a legacy reminiscent of a Colonel Sanders/naughty Mr. Rogers, but the guy had an amazing career and could throw in the 90s well into his forties and won seven Cy Young awards. Just great pitching mechanics. Ash drops at a surprise half-inch and is kinda on the warm side. Nicely oiled, tho. Chew has softened a lot and if left in my mouth, might disintegrate. I'll give the profile a medium, all told. Strength has yet to be.


ACT II
White bread toastiness is getting a tick more oat grain. Notes are humming along and I can't really expect more outta a stogie than what this Mark Twin is a-givin', gentlepersons. Not a bite in sight. Nice even draw and burn. The retro-hale is a bit iffy insofar as sharpness, but isn't necessary as it don't offer more notes. I'm sitting in my mid-June carport -- shivering in a wool over-coat -- but I can't complain. I can complain, though, as to another 1/2 incha ash drops onto my keyboard. I skillfully whisk is away with a schmatta.

Orange blossom honey and caramel, huh? Okie-dokie. There is a tick of a green note now, in the under-belly of that new flavor. Salty comes up to nigh meet sweet, but sweet doth continue to driveth. Softening of pack now hits band-point and I'm at the exact half-way mar of this eight inch No. 3. Nuts flex.

This offering is a real trip down memory lane. I began my cigar reviewing journey composing tongue-in-cheek write-ups of cheap sticks in a manner reserved for boutique cigars. You know: pretentiously. Now here I am, a pretentious and vastly boutique reviewer. What a country! To think, I'm just poor kid from Brooklyn -- now a poor adult in the Pacific Northwest. Suede goes back to leather -- a lightly complected leather. Smooth and supple. Ash keeps dropping. Schmatta keeps whisking. Earth keeps turning. Teachers keep on teaching -- except the last day of school was yesterday.


ACT III
Band removes smoothly BUT WAIT! ... there is cracking in the top-leaf under-neath. Also, I taste tea. Orange blossom honey goes there. Chamomile is a smell/taste on the immediate draw, but then the note itself is Lipton with honey. Binder bulges a bit under the cracking. I'm gazing at a buncha that binder now. Orange goes to lemony. Smoke starts to out-pour and gets a brownish addition to its hue. Wrapper is a fugly thing now, but binder holds and bulge is smoked through. Cosmetic, only.

Notes are on cruise control, as ever. I dug this stick. I'm even getting a half-zetz of strength from it now. These are what, a couple/few bucks per when ya buy a box? Can't beat it as an everyday, gentlepersons. Box looks cool, too. Fercockt top-leaf gets smoked through on a burn-line that stays true. Smoke is cool to the surprisingly firm-ish nub and I'm gonna toothpick the thing and write at ya a bit later, gentlepersons.

NOTES
Lettuce Kibbitz sometime soon re: what yer paying for in a ten buck stick as opposed to this price-point. I am covered in ash droppings.


PAIRINGS
I've been playing with tea pairings in my spare time, as coffee has again caught up to my weak gut, and oy, the caffeine induced teeth-gnashings. Tea would work well here. I know nothing of tea. Lipton? Tetley? Loganberry Manischewitz in the evening-time. 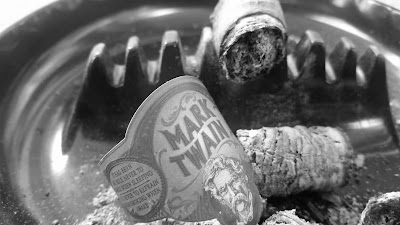 EDITOR'S NOTE
You can listen to an audio version of this review HERE.