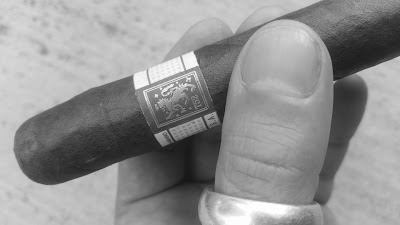 According to DRF, "'Moonist, the champion aged Quarter Horse of 2015, was euthanized late Tuesday after complications from colic, trainer John Cooper said on Wednesday.'"

My heart-felt condolences to the multi-graded stakes winner's connections and fans. He was the first horse to win four derbies in a single year (2014) at Los Alamitos. He too won ten derbies and four stakes in that, his three year-old campaign. All told, Moonist was a winner in 24 of 34 starts and earned a total $878,468. The fine gelding won four championship titles, as well. Unbeaten in four starts this year, Moonist was rated the nation’s leading older horse. He wore pink. I liked that. May his memory be a blessing.

Here's to ya, Mr. Martin, with thanks.
Also thanks to Mr. Martin, I blind-reviewed this offering in its Toro format HERE.

PRE-LIGHT
To paraphrase, "That's not a cigar. This. Is a cigar." I've only time for one smoke to-day, so why not make it two? Rich and lively brown leather shoe even complected with a heady burnt-sienna under-hue riding high and nigh to the top. Some espresso marblings over-top of that and under a quite healthy and well-distributed oil-sheen. Zilch in regards to heavy veins; couple a' light ones and some good spiderweb stuffs happening along the shaft. Seams ain't super tight, but tight and verily even. Cap is flawless. Foot tobacco peeks out at a rich brownette with ticks down to red high-lighted brunette. Packing density eyeballs to a -full. So much tobacco...

Hand-feel is a leathery thing, oiled like a catcher's mitt but too put away for the off-season, and picked up for Opening Day. Some nice toothiness. Pretty nifty balance and feels OK in my paw for the size. As I finagle it, it begins to border on a rough velvet. Charmin squeeze test shows a medium+ boundary pushing re: density of pack. Apparently, I have found a realm betwixt medium+ and -full. Huzzah! Schnozzola time: along the shaft I get a cedar earth note delivered on leather. At the foot, some added pepper and a clove vibe. I Xi2 cutter cut the T52 and get cold notes of creamy milk chocolate braced by floral spices (clove-led), again leather is the under-belly. Some honey is on the cold finish. Yum.


LIGHT
Toasting the foot lets loose a fairly simple creamy earth note. There is a lotta tobacco in this DE, gentlepersons. Toast and light patiently. First hot pull is peppery as heck under-neath... this is restrained to allow a creamy spiced cedar and neat leather, the spotlight. Very full o' earth middlings. Hard to spot an under-belly for all the laid back peppers. Second hottie is a black pepper clove mix of eye-watering proportions. Drops to palate in a very sharp creamy cedar note, seasoned natch. Then comes a tick of floral. Third hot pull is a growing spicy and influx of caramelized sugar and black cherry. Pepper is black and red. Spices are clove and a new cinnamon led melange of reddish. Earthiness has a great espresso poured in. Oy.

Match-lit out of doors and evening up on a thin line which gives off sturdy pale grey ash. Draw is medium to +. I keep finding those tiny realms here in this Liga Privada. Smoke out-put is huge off foot and into smoke-hole. Room-note is a sweet thing, laced with sweet creamy spices and wood notes. Packing ain't softened an inch off burn. Profile is a medium+ outta the gate and is a fantastic quick-firing in honor of Quarter-horse extra-ordinaire, Moonist.Strength is a -medium. As I've writ this, I've taken a couple puffs, and gevalt! -- we've some flavor catching up to do...

ACT I
Wood profile adds a mesquite front and oaken back. All char lightly. Smoked meats come in. Chocolate, milk, flexes and gets a tint of maltiness. So many happenings. There is no hierarchy yet, per se. 'Simply' an introduction of cast members. Big cast, gentlepersons. Burn-line is even and ash is silver in places. Everything tastes soft and gold. Luxuriously textured. Spices form a mulling spice, to include orange rind. Herbs and nuts come in and what a dang morning-starter.

Let's see. Woods and creamy spice zetz are primary. Said woods are cedar-first. Middling is a espresso-front earth core. Mulling spice is there, chocolate, honey. Underneath is a leather. That seems vastly over-simplified. Almost every note has a sweet creamy and spiced counter-balance. Rye malt is mingling on the leather. Cherry and caramelized sugar are game-planning.

Smoke gets a yellowish tinge. Burn-line wavered a tick and is now self- correcting. Ash flakes a bit. Draw seems a tick hesitant, but I am sitting in a cumulus cloud, gentlepersons. My jaw ain't loving the 54RG, but my palate is telling it to shut up and quit complaining. Finish is long and sweet creamy wood notes. Spices. Mouth-feel is perfect moisture levels on a cushioned tingle... almost minty fresh. I am somewhat concerned, as I need to tug noticeably harder to fill up. At the opening, a sip would do. There is a tick of hesitancy to respond to each draw.


ACT II
Caramelized sugar goes to espresso and voila! -- Cuban coffee. Cherry is attaching to a new and separate dark chocolate and voila! -- cherry cordial. These occurrences doth occur in the upper middlings. Profile is a 'soft' -full, strength is medium and up-ticking loometh nigh. Hesitancy of draw is gone and smoke-hole is again filled upon a sipping.

Perhaps I should explain the settling in of flavors. There is still a slight roller coaster here, but I feel as though it's now a roller coater with which I am familiar. I can expect the twists and drops now. To the blend's credit -- they can be both predicted and enjoyed. Mesquite and oak woods have fallen back to further high-light the creamy/spiced cedar. Black pepper exists mainly on a retro-hale, and red pepper is riding shotgun to the mulling spice at the end of draw. Milk chocolate up-ticks on the finish, with a somewhat subtracting malt addition. Now it's on the draw, as well, softening the profile some. Ash cracks some and darkens. Strength dulls a half-tick... mayhaps I've grown accustomed to its face.

The remainder of the Double Corona's middle act is a softening of delivery and strength. Enjoyable, but lack of zetz leads to a dipping down of complexities. Flavors ain't fallen off, but some delineation has. I'm kinda all dreamy and stuff, gentlepersons. Smooth. I doth foretell a picking up in --


ACT III
I start here with a rolling off of dense tho cracked and a bissell flowering ash. I pull into my Dollar Store hand-mirror and notice that the filler is burning substantially hotter than binder. The spicey zetz of Act I was mellowed in Act II, but remained un-boring. We are now teetering, gentlepersons. Cedar and milk chocolate primaries are delivered on sweet cream and smooth textures. Middling is earth with less espresso and a subdued mulling spice. Leather has become suede in the under-belly. Nuances are mottled whispers of floral and honey notes. Strength has become a -medium and profile, a robust medium.

Draw evens at a medium tension. Pack softens a tick or two. Burn-line is an even 'nuff ribbon. Ash pales and regains lost silver flecks. There is a cut in the top-leaf, which is cosmetic only. Very cedar/chocolate. Body is creamy and verily. Molasses and a heavy aromatic tobacco flow in. Meatiness, which I've not seen awhile, is back in the mix. Suede under-belly gets a barley touch. Peat hits the earth core middlings. Mouth-feel is a bit parched. Nuts come back and are roasted more heavily. Still -- not a lot of zetz and/or delineations.

Burn hits that cut and it widens, threatening to fercockt the line. Remaining two inches of this T52 are bordering on spongy. Strength and profile meet at medium. Gone is the roller coaster, familiar or not. I'm on a carousel ride, gentlepersons. A carousel ride of an damp earth core. The horsies are so ornate and the music drones on...

NOTES
Normally, it takes a Double Corona a bit to lift off, then it finishes wallop-style. This Liga Privada T52 didn't get the memo. It was a bust in the mouf opening act followed by a constant mellowing. Nice, verily -- but too a tick tedious. Also, the construction/combustion weren't the typical heady display of Drew Estate offerings, but that is more of a vitola thing herein. I much preferred the Toro in this blend.

Here's an analogy: the Quarter Horse of the year, running in that year's Belmont Stakes. Not a fan of ponies? This DE blend seems to have not had the stamina for this vitola.


PAIRINGS
Coffee in the AofM. Concord Grape in the PofM. 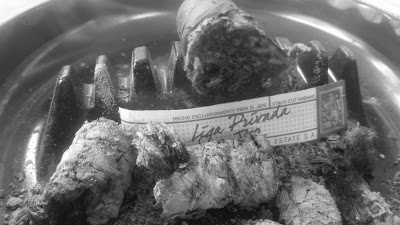 BOXING NEWS (yesterday's news, to-day): Seems like the camps of Mr. Saul "Canelo" Alvarez and Mr. Gennady "GGG" Golovkin have at verily last set a date for their long anticipated prize-fight showdown. Verbally. For Fall 2017. At 160 pounds. The middleweight division is 154 to 160 lbs. Which is a lot like stipulating a lefty use his left-hand in a penmanship contest. ... Read more HERE.

EDITOR'S NOTE
I've decided to re-use my own words in an homage to how The Three Stooges used stock footage.