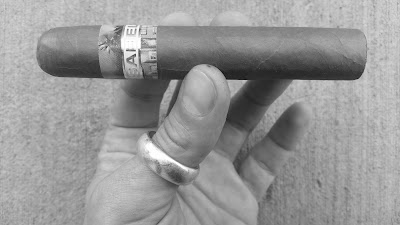 
LIBATION
(as this is not a review, per se)
Tully's Coffee
Espresso Roast
Pour-over brewing method
w/ Stevia packet

NYQUIST DRAWS 3 AT PREAKNESS
Whilst only vaguely listening to TVG yesterday, I heard from the corner of my ear a poll. Seems the TV announcer, I missed which/whom, put up on his Twitter a voting opportunity -- Question: what is Nyquist's largest stumbling point in the Preakness (bad paraphrasing)? Options if memory serves included: rain, Exaggerator, Lani, Stradivari... the co-announcer added in, then sheepishly took back, "Nyquist."

I shouldn't be smoking this Isabela, darn my impetuousness. It was delivered to me yesterday as a kind offering from brand owner and gentleman, Johnny Piette. It was delayed as to USPS on-line admittance. The box was open irl upon receipt. Bags therein were gone through. A very nice cigar gift, missing. My mail-lady with the nice legs shrugged, wished me and it well.

A pepper mini-blast is on you upon lighting, but in a different sorta manner than is common -- cushioned in cream and sugar. Sugar from the Cuban method employed of affixing cap, cream from a somewhat almond paste flavor note origin. Draw is smooth and even. Combustion matches draw.

It struck me that there very well might not be a point of stumble for Nyquist. He's beaten Exaggerator handily each of the four times they've met -- can a hero be a hero sans nemesis? The latest news is of starting position... I don't feel it matters. To be clear: not specifically the 3, but post writ large. I don't think any horse can catch the Derby victor. Regardless of weather. Can he beat himself? It's a funny thing, that; another entrant still needs to step up.

Lani was mentioned. Granted, the Japanese visitor, is the oddest factor -- but odd don't cut it. Lest I'd move to Portland and be done with it. His post position sets him up betwixt Nyquist and Exaggerator, but the horse broke so slow outta the gate in Kentucky that I don't think that particularly matters. So what makes him odd? He's a nut-job. Trainer Mikio Matsunaga elaborately walked his charge for ten whole minutes around Churchill's mile chute prior to when the other race participants were called to the track. He wore full blinkers throughout this all. Then exited the paddock well-ahead of the post parade; walking the track before heading to the gate. Then they were off. Well, except Lani, who finished last. Feh!

Back to Exaggerator. In those four opportunities to be a suitable nemesis to the 3-5 Preakness favorite Nyquist, he's come up short of tantalizing. I don't foresee this changing come Saturday. Stradivari has been bandied about as an X-factor. He remains my leading pick for an impediment, but I won't be putting my moolah where my mouth is. Not on a pony whom has raced only twice. Albeit for two wins by a combined distance of some 25 lengths.

The second jewel of the Triple Crown seems a foregone conclusion, and that is well within the confines of being an historical truth. See ya at Belmont, I sez ominously. The Belmont stretch, to my mind, may be Nyquist's long-lost potential foil.

Caramel joins in the middlings with a medium roasted diner-style loaded cup o' joe. Almond paste is stirred into a bright earth under-belly. Mouth-feel is smooth and clean to the point of being fresh. Some alfalfa with floral vibings is on the immediate draw. Finish is that under-belly with a black pepper zetz which too, livens up the mouth-feel.

ON BOLD FORBES
Seattle Slew won the Triple Crown in 1977, followed by Affirmed 1978. Will Nyquist in turn follow American Pharoah into the annals of horsetory? Maybe. But it got me thinking of AP's just-missing 2014 predessesor, California Chrome. What happened back in '76? I thought this back as I toasted the foot on this Isabela to a Wonder Bread aroma.

Currently, a salted butter sets on my lips. The sweetness of tip is nigh gone now. Construction and combustion hum along. There is a white toast note which ebbs and flows. What is most notable in the core Isabela line I've smoked, is an incredible "smokeability." It's akin to the drinkability of Bud or Coors, even begrudgingly admitted by frou-frou craft beer enthusiasts. Ya just wanna keep pulling. Smoke out-put is full and thick off both ends, and enticingly sweet and smooth on both draw and room-note.

Bold Forbes was a stallion who won the 1976  San Jacinto Stakes, Wood Memorial Stakes and Bay Shore Stakes. Then the Kentucky Derby via a blistering pace under Angel Cordero. In the Preakness, humsoever, his pace was met by the Derby fave Honest Pleasure -- and both tired. Elocutionist won Act II. At Belmont, Bold Forbes was again victorious, that time by a neck. At year's end, Bold Forbes was voted American Champion Three-Year-Old Male Horse.

He sired 13 crops through 1990: 304 winners, 30 of whom became stakes winners. His offspring have won over $18 million. Meanwhiles, poor Chromie with his tricky stud future, keeps running.

HERE is a link to the full list. I really and honestly don't overly care, gentlepersons. It seemed like a nice thing to include, though. I sure ain't certain about the whole "1,1,3,3" formatting. I ain't a math guy, though.

Through the band, we are still cucumber cool, although a seam loosens a tick on this Sparkle. I realize now that I have not touched my coffee. It's cold. I'm cold. It's mid-May and April has left its showers behind. If you see April, tap it on the shoulder, wil ya gentlepersons? HARD. Oy vey iz mir, I'm still wearing Long Johns.