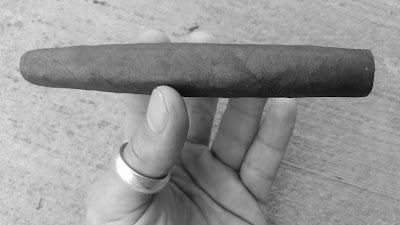 PROLOGUE
This is gonna be the most Hipster thing ever I done.
I wish I could audio review this on vinyl.

"The concept of the company involves tracking down cigars that have been resting for some time in aging rooms of various factories and bringing them to market. The company has been targeted online retailers specializing in boutiques. The cigars are small batch and limited production in nature." - Cigar Coop.

No bands. Shelved and forgotten blends. a +10 msrp. If you think this smacks of scam, think again. My time as a student at Trump University followed by lucrative dealings within the Trump Network, taught me how to spot scams from a mile away. I see nothing. Nothing, gentlepersons. Gentlepersons? ...

PRE-LIGHT
I kept this Le Pigeon, condom on, in my humi. No band (again) -- needed the scribbled on cello name for ID purposes. When I slid it out, I must say, I was quite surprised by its luxurious smooth sheen and heft. Milk chocolate densely complected. Creamy under-hue of a tick lighter shade. Very suede tooth over-top, but too under, a healthy medium weight oil-slick. In the 3/3, that very slight tooth is alongside a splash of yellowish water spot pimplings. Seams are more loose than tight, but even. Exceptionally minimal veins. The Figurado strikes me as a half-hearted perfecto, but my Perfecto love is nearly tickled herein. Foot tobacco is a dirty strawberry blonde to light auburn. Lively hues. Medium density of packing there, to the eye-balling. Cap is quite nicely appointed.

Hand-feel is a somewhat awkward balance via the Le Pigeon format. Smooth textured soft top-leaf with no tooth particularly showing. Dryish oils don't transfer to mitt. Lumps from under impede the hand-feel a good tick. Charmin squeeze is a medium+ density on each end of the fatter center 1/3. At that center, packing is a medium. No soft-spots occur within them parameters. Schnozzing the shaft I get spiced chocolate and hay notes. At the foot, more chocolate.


LIGHT
Toasting the foot with a wooden match gives off an aroma of toasty cocoa powder. Some inherently sweet tobacco underneath. First hot pull is up to a medium+ resistance and is a primary of chocolate and red spice... and not a heckuva lot more. Cedar comes up on the finish. Sweet tobacco throughout. I retro-hale the second hottie and it seasons the cedar. Seems like vibes are trying, but nothing is quite here yet. The nuance arrived before the flavor. How different, gentlepersons. Third hot pull is cedar firming even more. Chocolate is up-top next to a slightly lower red spice rack. Mouth-feel becomes a bit of yeasty added to an already building cream. Yeast is from a hay vibe, I believe.

Smoke is a -full out-put from each end and into my smoke-hole. Ash is pale grey sans from the toasting area which is near charcoal; it's attempting to sheath over tight ladder-rungs. Burn has a tick of wave, yet none too egregiously. Its line is a near razor thin thing. Pack softened considerably off light, on down the shaft all the way to its hump. Feels a tick warm, too -- but I ain't never been afraid. Draw is lovely. Room-note is a french bakery and the baker smokes nice cigars.

ACT I
Chocolate note firms and gains an influence of the creamy and yeasty hay vibe-turned note. It's the backing here. That chocolate is primary alongside a spiced cedar. Coffee finds cream in the middling, orbits around a neat tobacco core. I get the feeling we're very much still evolving and I'm an inch+ in.

A retro-hale gives a nigh zetz of red spice, the heartiset note thus far. Very smooth texture of smoke. Packing is firming back up a bit. The shaft has taken on a musky almost gamey scent which acts as a smell/taste on the immediate draw. It's in the room-note, too.

OK, all the way near the opening act's conclusion -- coffee and cream note flexes. There's a caramel note buried in it that becomes more noticeable at the C&C fades. Caramel lasts to and through a lengthening and quite yeasty finish. Cream is there as a mouth-feel. Seems like we're settling in again after that coffee up-rick. Profile is a medium+ and strength hasn't moved the needle yet. A fruitiness is vibing in...


ACT II
Smoke out-put is full. Fruitiness goes straight to finish and lengthens, really plays well with the cream there. Chocolate on the primary is damn near sinfully so. Cedar softens against some of the rich chocolate. Very chocolate cake retro-hale. Coffee and cream bulges in the middling as the inherently sweet near pipe tobacco, tobacco, mellows. Underneath is that yeasty hay -- it stretches out slightly ahead of the other notes. I hear French music. I can kinda make out a mime, performing in the distance. Baguettes and croissants pour their aromas out of a wood oven and into the lively streets. There's a juggler busking. I'm grinding my organ like I'm back in junior high school, gentlepersons.

There's an additional hickory wood note and some ground pepper -- white and black. There's a sweet salt on my lips. Burn is very good. Floral notes come on in, dried like a potpourri, but revived in creamy oils... a clarified butter. Gamey/musky hides. Finish is exquisite and flirting with chewy like a drunk Han Solo. Yes, I've know used that line I believe thrice. It's a fine one, that one.

For all this building, the profile is now more medium than +. Strength is nary a thing. Burn ribbons a hair. I roll an inch of ash (same complexion as prior) into my $0.99 Walmart tray. Very dense with oils. It holds up to a ham-fisted fingering quite well. At the mid-way point, the flavors all dig in their heels and entrench. Almost a loud delineation doth occur. Pace slows. French music slows and becomes near sad, but mockingly and dramatically so. G-d damned sad clowns. DYK: I almost went to clown school. Couldn't afford it, so took out some student loans and took up philosophy. I still have no answers, but my questions are brilliant.

A tick of wrapper don't wanna burn, but we shall see. A nougat sets in near the caramel. Coffee is flavored thusly. All told, this Le Pigeon flies quite low, in terms of flavors, but it's the prettiest rock dove maybe in ever. A retro-hale has a new vanilla and roasts new coffee beans. I need to Djeep that tick of top-leaf. Musky note returns. Tastes like age. I've never licked a liver-spot, maybe.

Earthiness, a black topsoil comes into the underneath hay and totes strongly. Black pepper up-ticks and then soars. Profile is back up to medium Plus; strength is mayhaps a -medium. A funny thing -- many want a bust in the mouth for a ten buck+ stick. The many may be lost and unfound in this Lost & Found offering. I, humsoever, am all about nuance... we got that in aces here. Although at times near frustratingly so, in awaiting their development. A strange development at that, or at least a different take on delivery. As stated, they occur prior to the notes and one must wait and see. Strength ups to medium. There's a roasted vegetal vibe that wiggles under my tongue in a waxy manner. White pepper in cream is atop my tongue. Palate is sweet hay and rich earth. Chocolate drives cedar, wood, coffee and cream are in the backseat. Fruit, red and purple, rides shotgun -- but its dozing. Smoke is actually cooled as the road unwinds up ahead into

ACT III
Very yeasty. Fruits dry and a nut vibe hits 'em. Flavors all mellow a tick. Then: full body. Yeasty creams all over the dang place, gentlepersons. Sweet hay rises and rises and, yes, rises. Mouth-feel is heavy whipping cream with a slight ghosting of white pepper tingle. Coffee and chocolate -- lettuce call it mocha meow, with the addition of more beans becomes an underneath. At the band's approach, all is lush and luxurious and the road up ahead is the same as the road underneath and we are far from the lil Frenchie town, but I can still hear the music -- it's jauntier now. Caramel soars at the mid-band,

Smooth and cool to the nub, gentlepersons.

NOTES
I still feel as if I've been scammed, but am too, totally fine with that and fully satiated.


PAIRINGS
Leave it alone. "It," being nuances.