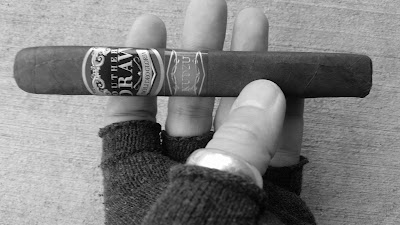 Sample courtesy of the fine gentlepersons at Southern Draw.

Hand-feel is surprisingly/not surprisingly out of balance. It's pressed/it's a Toro. Feels a tick light. Not toothy, but fine, fine grit sandpaper; a short-knap stiff velvet. Oils attached to the fingertips. Charmin squeeze test is a -medium density result. Springs right back to box. Even throughout.

Schnozzing the Kudzu gives me notes of earthiness and faintest cedar with even fainter seasonings attached. I nibble off the cap to a puff of air. Meaning, you can hear me puffing. OK, I can hear me puffing. Wispy. Notes of light and lightly spiced, cedar. Some cocoa with a mounting sweetness ending on the cold finish in cocoa. Tobacco backing. Barely a medium draw resistance. Too good a draw?


LIGHT
4:30pm
I shant toast this closed foot. I discussed that, box-pressing, and this Southern Draw offering in general, on THIS Radio Herf. It smoked quick and sans much flavor on that go -- but that was NOT a review. This IS.

I left my last box of matches out in the damp NW last night -- so this evening, I go straight to Djeep minus passing Dgo. First hot pull is a blast (which I did not get last time out) of heavily seasoned cedar with a close second of rich chocolate. There's a bit of black pepper in the mix, and perhaps a flake or two of red, which makes a nice tingle. Good zetz. Very peppery retro-haled second hot one. The peppers stay in the semi sweet spice mix, which stays attached to the cedar. Only the chocolate is alone on its own. There's an almost red candy vibe on the end of the medium+ finish. Remember those Boston Baked Beans? Me too. Now. The draw is a bit less responsive than I'd like and has firmed to a medium+. Third hottie sees the chocolate nearly catch the spices, and the cedar stay put. Nice tingly mouth-feel with a great level of moist. Tingly and sweet, but spicy feisty.

Burn is wonky, but I didn't toast and will give it ample time to fix. Ash is medium grey to charcoal. I really felt the wrapper zetz die on that third pull, gentlepersons. The pig licked off its lipstick (see Radio Herf). Oh, ash is a bit flaky and clumsily if not precariously adhered. Lightly greyed smoke with a very woodsy room-note. Chocolate ebbs and flows on each finish. Packing softens a tick and a half about an inch and a half off burn-line. Burn-line is a ribbon on medium+ thickness. Profile is a sturdy medium, strength is a low+ but coming on, I believe.

ACT I
The tobacco middling note is bulging. Under it is a new barnyard/dry compost/black soil thing. Primary notes are spiced cedar and chocolate. I get a hint of leathery oils on the mouth-feel, only a vibe on the tasting. Retro-hale is a much, much subdued pepper with the cedar forefront. I'm an inch in at the ten minute mark. Ash is loosely woven, but holding. A tick darker than prior. Tingle leaves the mouth, but there's still a nice spice. I pull out my schmatta in case of falling ash, which seems probable. Burn is evening, but not yet even. Tobacco middling is sharpening and darkening.

Strength kindly ups to a -medium. Profile is a more comfortably contained medium. A charred taste hits the tobacco and somewhat the cedar. I roll of the ash in my $0.99 Wally World tray and it's denser than appears. I'm forced to retouch, as the Kudzu becomes even less responsive to pulls. There's a tad of a canoe threat occurring. I believe it's been abated.

Char notes have intro'd a savory flavor addition to the menu. There's a quick but definite toasted pecan note on the immediate draw. One side of the press again (same side) runs ahead. Ash is a clumsy sheath attempt improvement, grey to dark grey complected. Pack is firming up a tad. The char is nice, and not drying to my palate. Leathery oils off-set nicely. Strength is medium, gentlemanly so. Another re-touch is required.


ACT II
Chocolate sweetens and deepens to a very rich note which overtakes cedar in the primaries. Tobacco middling is quite nuanced; pulling from above and below. Black topsoil backs it all quite well and evenly. Finish is sweet in a dark chocolate manner. Tobacco stretches it to a -long but not full affair. Sweet, but not quite desert. Balanced by a charred savoriness...a bone marrow feel. Seasonings are paprika-led. Some cinnamon. Cumin vibe.

Mesquite comes in softly. Small, nuanced menu. Very light smoke at times, and never above a -medium out-put or smoke-hole delivery. Crisp mouth-feel, as some of the oiliness subsides. Nice savoriness. Very nicely matured sweetnesses. A bit of sass which I cannot quantify.

Ash is unchanged. Burn-line is a medium thickness and ribbons. Canoe is a near threat through-out. Short quick pulls following a purge get me more smoke. Packing holds. Like any box-press, it feels great on the chew. A bit of brownie happens to the chocolate -- ups body and flavors to medium+. Strength is a decent medium. Room-note sweetens. What bothers me is that I'm certain it'll go out quickly sans draw -- I will not be testing it. Smoke out-put darkens. Ash has specks of black. (Re-touch.) Two 1/2 inches left at the 35 min. mark. I am a slow smoker, gentlepersons.

I'm getting a couple ticks more smoke, but too, thinner flavors. Predominantly char, but it brings that warm savory with it. Flavors hold firm and well. There's simply more space betwixt thems. Strength pushes up. It's strong, but in the way a wiry man wields his strength; not a beefy rassler. That's a decent flavor analogy, as well. This physique allows nuances, and there are many. I'm unconvinced as to complexities.


ACT III
More spaces -- and the tobacco begins to fill them. This causes a somewhat lesser delineation of notes. Notes are the same. I roll off the ash to the same density as before and look at the cherry. There are some gaps therein. Overall, we are more darkly sweet than savory now. Bone marrow mutes. Red spices cluster and whisper, Fudge brownie soars. Molasses takes hold darkly. Cedar loses sharpness but toasts nicely. (Re-touch.)

All told, the final act is quieter but perhaps also the most enjoyable. More smoky of an out-put. A more attentive draw. The same notes as I and II but with an increasingly darkly mature manner. Very smooth throughout, but here especially. Smoke is cool to the band, and through.

NOTES
My audio mentioned opines as to box-presses and closed foots are unchanged. Weird combo in this Kudzu, of rapid burn / not a lot of smoke. Nice flavors. Lots of empty space.

Perhaps it misses my wheelhouse. Truth be told and humsoever, I have the wheelhouse of a floozy. Who knows?

Musical pairings: Jazz with as many an unplayed note as this Southern Draw.


EPILOGUE
5:25pm (through band)
I'm up early AM to edit this thing. I passed out last nite at eight-something. It was the fault of my television. Well, Netflix. I began with a Bourdain Layover in NYC -- which quickly made me terribly homesick. Then, in a bloom-wherever-you-are-planted effort, watched four minutes of Portlandia which nearly reduced me to angry tears. It nails this area so completely.

But hey. Bright eyed, bushy tailed -- and everyday ahm hustlin'. Thanks for reading, gentlepersons. Oh look, it's 8:50am. Time for lunch!