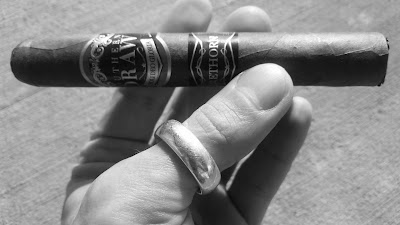 PROLOGUE
For Ruby Vondella's belated bday, I cooked her a lovely chicken dinner. There was much feces. It was a great day. What a dachshund!

PRE-LIGHT
Chestnut complected, unevenly so as a bit of top-leaf is a tick darker than the rest.  Espresso bean marbling over-top, under-hue of a lighter orange vibe. Light oil sheen. Some goodly veins, but no apparent impediment to burn. Lots of spider veins. Cap is nicely affixed and foot is closed, so no idea what's going on there.

Hand-feel is a bit out of balance and perhaps a bit light. According to the Charmin Squeeze, I'm looking at a pack density of -medium to medium, dependant upon where ya press. A vein ridge in the 3/3 impedes the hand-feel a tick. Some trace oils transfer to the fingers in a dry manner. Top-leaf itself is smooth and of average moisture. A vein in the 2/3 can be felt sharply.

Schnoz notes are deep tobacco, manure, cocoa, perhaps some kitchen spices led by a cinnamon. Nice. Some slight nutty vibe. Nibbling off the cap, I'm made to realize it's quite spongy a feel. Very soft chew. Cold pull is very cinnamon and very but lesser cocoa. Some other red spices are there. A pecan note. Airy side of medium draw resistance.

LIGHT
3:15pm
Fine. Closed foot. Won't toast it. Blast of cinnamon backed by a bit of red pepper. Nice zetz off the closed foot. Subdues into the finish where there is a nice bit of pecan and a caramel vibed sweetness. Tingly but creamy mouth-feel. Warm palate. Warmer than normal, but still kind, smoke. Good out-put of smoke off each end. White and heavy. Room-note is a red pepper sharpened darkly sweet tobacco. Ash is 90/10 salt/pepper forming a loose sheath off an uneven burn. Medium line.

Lemme take me another puff. Third hottie is retro-haled to all the red pepper and cinnamon I'd ever want, but it remains unirritating. Pecans ride high in the wake of that. Some caramel-led sweetness at the finish. Long clean legs there.

Pack has softened even more, but too has hardened in a spot or two. Draw is consistent to its onset. Smoke out-put ramps up a tick. Burn is finding even on its lonesome. I'd say we're off to the races.

ACT I
Alrighty, gentlepersons. After those first three/four top-leaf-laced puffs, let's run again through the list of notes. The notated notes, if ya will. I will, thanks. Cinnamon, cloves, vibe o' nutmeg (in that particular order) are up top as primary. A cocoa powder is there up-top as well, but lesser. With a bit of a caramelized sugar addition. Middle is a pecan note which stretches into finish. There's a sharply toasted caramel there, too. Backing it all is a rich and dark but lively tobacco with its own set of kitchen spices.

Burn is even. Pace is quick. Ash is a loose sheath breaking into ladder-rungs but holding throughout to the tune of a solid inch, easy. Burn-line is thin. Ash cracks as I type and I roll of in my $0.99 Walmart ashtray. Quite airy powder, and warm. Burn shows some aeration. Packing has evened to a -medium density with a better spring-back than prior.

ACT II
Cocoa goes to chocolate yet palate dries a tick. Retro-hale is same intensity as before and of the same notes. A slight crack in the wrapper happens about a 1/8" off burn. Some chili pepper is added to the draw. Slight BBQ vibe.

Pecan candies a tick on the finish, roasts, too. Mouth is a better moisture now, perfect really. Tingle has subsided but cream has not overwhelmed; stays clean. Draw is a medium, dead-on, now. Strength is a -medium at best. Profile is a medium+ (low end of spectrum).

At the half, peppers subdue and on the retro-hale cloves and nutmeg pull even and perhaps ahead of red pepper. Still a nice bracing there. Very clean, as well. Chocolate is very nice. Pecans, too. Great flavors all around. Tobacco under-note is quite high and nuanced as stated before. Some mesquite wood on the immediate draw emphasises the BBQ feel that weaves throughout. A purging ceases the sharpening which was a fleeting threat of a threat.

Ash is more ladder-rungs than sheath, but tighter and builds well. Burn wavers a tad but no re-touch is mandated. Packing is noticeably soft in the hand and mouth. Line is razor-thin. Room-note has sweetened. Caramel ramps up in the middling notes. A bit of coffee bean is coming into that middling, as well. A tingle is setting back into my mouth and tongue-tip from the cinnamon. Also, a slight resurgence of red and chili peppers... more finely ground, is at the top. Chocolate is thinning some.

Strength is pushing medium. Profile holds at a medium+. Draw and construction now hold. Ash darkens a tick or two. Still aerated, but re-evening its line, which is now a thin+. The soft packing makes a nice chew and especially for a 54RG.

ACT III
Pecans lose their candied, but roast deeply. Tobacco under-tone bulges into and beyond middling at times. Notes are all fairly high (purge) too, delineated. Smoke warms a bit more. Hickory joins mesquite. BBQ fades. Caramel is in the coffee bean. Some leather joins in the on-top of the underneath. It nicely reinforces the boundaries of dimension. Very much a dark tobacco saved from being abysmal by the nuanced and strong backing notes. Almost aggresively clean at times here -- a kerosene vibe.

As the band approaches, chocolate comes back near the top of it all -- very dark but not very rich. A manure almost gamey note injects hard into the middling. Palate feels slightly abraded, a tick toward dried.

Strength dulls to a -medium. Flavors thin to a medium at the band, but it's nice. Very clean straight through. Finish is a mouthful of roasted pecan. Burn slows a tick but is now a normal pace. Chocolate shines; it's the stuff ya hated as a kid, but like now that yer an old fart. Mature stuff, gentlepersons. I think I'll ride this out and I think I shall rather enjoy doing so. Even though my palate is a bit roughened up. I am somewhat of a masochist bent in my cigar likings. Somewhat.

I must say this pushes that at its end.

NOTES
All told, a noticeably better offering than the Kudzu, and a decent sign of growth. Much less of an AJ Fernandez-esque attempt, is this Firethorn. Strange, because Southern Draw seems to have worked more closely with the fella on this 'un.

I failed to mention my schmatta. Till now.

EPILOGUE
4:10pm
Check THIS out.