PROLOGUE
8:18pm
Today I went to Barnes & Noble. Before that, I almost bought a Navy Pea Coat, but it linted all over my shirt and I thought better of it. Another schmatta, I don't need.

PRE-LIGHT
Not overly tight but even and well-appointed seams. An nonthreatening to anything beyond cosmetics large vein or two. Some smaller veins and occasional spiders, but not too many at all. Dark chocolate espresso roast bean complected and quite evenly so. Undertone hues of the burnt sienna variety. Tobacco at the foot is a matte brown with dirty blonde highlights. Cap isn't of the smoothest construction, but crafted well enough. Box-press is a rather vague one. Charmin-wise, the firmness is a -medium and even throughout.

Schnoz-wise, the shaft mainly gives simple notes of mulch/barnyard/manure. From the foot tobacco, some very nice rich chocolate notes with coffee bean under-note, get added to the mix. Nibbling off the cap lets me in on a quite airy draw, which consists of the foot's smell-notes and a creamery butter mouth-feel on a leather backing throughout. A cold finish goes back to barnyard and retains leather notes.

LIGHT
Toasting the foot releases some sharp leather notes and less sharp hardwoods. Light is a simple affair and catches easily and evenly. First hot pull is of peppers black and cayenne with a finish which eases down into bell pepper waxy flavor. Very sharp leather on the draw. On the finish that green pepper is joined by cocoa and a sweetness which hints at molasses. Second hot pull is retro-haled to show more cayenne and something akin to Asian spices. I'm getting an odd stir-fry feeling. Smoke is just this side of harsh, into the ol' smoke-hole and off the foot where a very sharp leather and waxy chocolate let rip. Third pull is a bit more airy than the first and has somewhat lazy draw notes coated in wax. There's a sharp leather, decent cayenne, and Asian spices and green peppers undertones to the expected Nicaraguan primary influences of mulch and dark sweet chocolate(although waxy). The finish is somewhat more captivating with hard leather, dark chocolate, a trying molasses, and a creamery butter mouth-feel that feels less a part of my mouth than is usual. As if I'm experiencing it through a waxy screen.

Burn is quick and even on a near razor burn-line. Ash is somewhat flaky pale-ish to near charcoal grey. Pack has softened already and the rounded edges, further round

ACT I
A vanilla tries now on the trying molasses, as cayenne amps up ahead a notch. Not very evenly balanced there. Those green peppers have gone and the Asian Spices remain unchanged. Chocolate looses some wax. A licorice seems to want on-board, but seems winded already as it runs behind. A sharp leather is what's running away from all else in something like a tantrum. Another green vegetable note is under there somewheres. There's an anise type thing on the predominately chocolate finish. The mulch sharpens throughout as it seems to cling to the leather.

The burn wavers a tad but self-corrects. Very fast burn. Retro-hale is an unkind cayenne and leather with a now sharp earth. The Asian spices are still there at the same notch, but falling back, nonetheless, to the green veggies. Ash clumps off unexpectedly but not very unexpectedly, at shy of an inch. Quite flaky with a bit of oily core.

Profile is a -medium strength, medium flavors, medium+ body, as the butter heats to a creamy oil. Packing is loosening again a full inch from the burn.Flavors seem to be subduing now and threatening to mottle at the end of the opening act. An almost fizzy almost root beer seems coming on.

ACT II
Burn goes wonky, but not re-touch wonky. Burn-line is thin but thicker than a razor. Chocolate is nice but harsh'd by that sharp leather and earth forefront. Green veggies are done. Cayenne is roasting on the retro-hale and a clove is almost happening. There is an awful lot of near occurrences here; all hidden and/or thwarted by sharp primaries, again, of leather and earth and a not quite satisfying dark chocolate with re-emerging waxiness. I'm getting the bomb, not so much the flavor. Mouth-feel is drying up as the oils are leaving. I'm smacking my lips but not in an umami sense. Fizzy root beer vibes off an increasingly airy offering.

At the half, some dark red to purple fruits also try, but don't. Molasses is barely holding on and getting bludgeoned foot its noble efforts. Some dusty exotic spices try, but get burnt for their efforts. The dark little thing in my ashtray is seeming more and more like Carla Tortelli, the bitingly angry Cheers barmaid. Now there was an over-rated show.

Coming to the end of the second act, the burn slows and comes near to correcting. The ash is a bit less flaky. Profile is medium+ and all notes are not quite right on account of an imbalance of sweet and sharp. Smoke is voluminous, but not full and quite unkind. Ash fails to make it a full inch and is unchanged in consistency and complexion. Finish is weakening and is a sharp mix of earth, leather, and waxy dark chocolate -- some hardwood is reappearing but drying to the palate. Packing has ceased loosening.

ACT III
A deeply toasted cream is at work now. Retro-hale is nearly ouchie-mama of sharp leather and somewhat cayenne powder and bits of dry red pepper flakes. Draw is leather and black soil, as the chocolate subdues. It's almost a headache inducing affair and deserving of its Diesel moniker in a poor version of the sense. Body is falling off and nothing, pleasant or not, exhibits a great deal of legs. The finish is a sharpness threatening on bite of leather, dirt, and diesel. At its very end, a waxy chocolate and nearly failed molasses are there. The cream leaves. An abundance of drool sets in and I start to spit.

At the band, I decide not to reach for a toothpick. The roof of my mouth feels as though I've eaten a bowl of Cap'n Crunch sprinkled with coarse-ground black pepper. Oh, black pepper is HERE now.

NOTES
Whereas the Rocky Patel Fifteenth Anniversary masters a limited array of trades, The Diesel Rage remains a jack of too many a trade. Funny, not haha but peculiar, how often this AJ Fernandez blend comes up short in developing notes. It's like an ADHD fella angrily failing at comprehending a Dickens novel.

EPILOGUE
9:20ishpm
I have been crazy busy this week, gentlepersons. Bear with me, please, my frenzied pace as I throw a #FoodieFriday yer way:

EGG-ED WHEAT
Have a heckuva week! 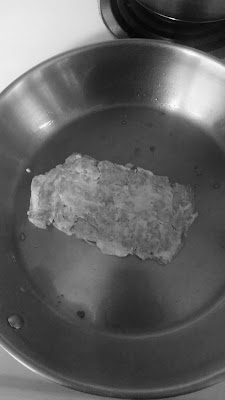