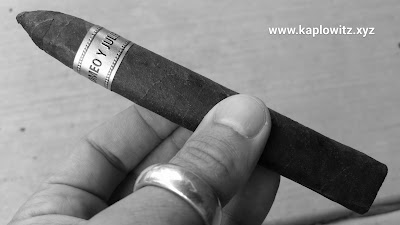 I
Sweet woodcentric earth core orbited by a semisweet cocoa. A couple puffs in, spice joins the warm and finely ground black pepper... a sweetness is therein. Black pepper is quite soft and almost hidden in the woodiness. Now, that woodiness picks up a cedar attachment to its hardwood profile. Cream comes in. Leather oils. That cream, that leather, a very solid and well-heighted under-belly. Room-note off a medium out-put is woods carried by leathery earth. Some nice inherent sweetnesses there and on the draw... very well fermented Maduro. I taste patience.

Very toothy and somewhat unevenly dark in appearance. A crimped vein in the 2/3. Rustic. In performance, seams hold fast to their pre-light tight. Draw is an evenly sipped medium. Burn-line is a tick of a non-egregious ribbon. Ash is medium grey marbling on a flaky ladder-rung/sheath combo. Back quickly to appearance, there is a bissell blemish at post mid-shaft, a p/dimple.

Cocoa is denser now, sweeter. A molasses pulls up alongside it. Black pepper is mainly relegated to a soft whisper on the retro-hale. Very kind, yet very definitive. Hardwoods and cedar swirl. Some light fruit syrup i drizzled into the richening deepening earth-cum-compost. Some caramel pokes out of the sweetness -- goes to lower middling on its lonesome and too, plays with fruit syrup'd underbelly compost. Cream cream cream. Delicious and comforting. Effortless draw. Smooth as silk texture. Medium length'd legs and sweetly wooden. A medium profile in a robust manner, yet politely so. Line is evening out, but still a tick ribboned and fairly thick via San Andres heartiness. Clean as it is smooth on the ol' palate, which is verily, gentlepersons.


II
A soft dried bouquet, yup. On the immediate draw. Mulling spice. Wood array attracts to it a flavor at a time, one by one. Fruit syrup, mulling spice, then caramel. Line threatens a wonking, but too seems to begin a self correcting right-aways. A somber pacing. French roast coffee comes aboard; cream goes there and this separates that cream from the leathery oils -- expands the landscape well. I remove the band, as it is situated a bit close to my sensual lips. I'm kinda surprised at its flimsiness.

Lettuce break from cigar-speak to address one Mr. Tyson Fury. Seems the party never ended this time 'round. In the past, I've mentioned his MO of living la vida loco up until training camp and then hating life throughout said camp. Coming in, then, primed full of urine and vinegar against his opponent. Couldn't abstain, he. Retirement seems the correct move, I am afraid. Although, gentlepersons, incredibly incorrect to have done-so via a tweet. The Heavyweight Champion of the world, disappointing fans and potentially sending the crown back to its Eastern European slumber in 140 characters or less. Shame, that. BREAKING NEWS: at time of editing, I notice SI has reported Mr. Fury to be back-pedalling on his "statement." Musta been the Peruvian Marching Powder talking. Again: shame, that.

The p/dimple is leaking a tick about <1/2" from burn. It's causing the top-leaf to lag a bit above it. Line is a bit of an overall mess, but not nearly fercockt. Just ugly... er... rustic. Profile seems to have mellowed, though still in the aforementioned realms. More soft leathery oils. Ash darkens a shade and a half. Pace slows and I can't quite get to that p/dimple, darn it. Line hath evened. The resting foot-smoke lessens, as the pull ups its out-put. Black pepper comes up high on the retro-hale. Hardwood portion of woodiness crisps and toasts. Cedar remains softly sweet. Ah, our lil p/dimple is now a part of the burnt offerings. Cocoa is a thin chocolate syrup. Pepper dials down a notch, as doth mulling spices. Verily woodcentric earthiness. Leather and its oils. A french-roasted java. All around a return to the onset's core delivery. A sort of formal retreat to its beginnings, as the final act is about to begin. Some molasses. A transition not in taste, but in delivery. Cream and caramel notes toast. Smooth as ever in texture.


III
Chocolate bits flex meow. Floral notes hath sunk into composted earth, there is a vibe left a' them on the finish. Some bit of tedium is setting in, gentlepersons. I feel a tick sedated, actually. Packing has now softened some, but seams and draw are unaffected. Perhaps uneffected? Dunno. Either way. A new red pepper comes in, apart from the black, enters into the molasses lilt, smooth and warm. Cedar soars. Composted earth floods with coffee and heightening fruit. Dang. All in a concentrated zetz.

A sweet cereal grain sets in. Adios, boredom teetering! Cedar flexes. Floral returns purple and heavily blossomed. Construction softens a further half tick, but holds. Smoke heats up a tick. Combustion quickens and is at its most excitable whenst I pull a toothpick outta my mason jar. All told, profile ups to its heightiest of heights as I'm shown the door.

Does anyone else see an '86 World Series redux a-coming? Buckner and Mookie are now hawking the post-season on the MLB Network for their thirty-year anniversary. Thirty years. I recall watching as a kid. For nigh a decade after, I had the clinching game recorded on a VHS. I should be receiving my first liver spot any day...