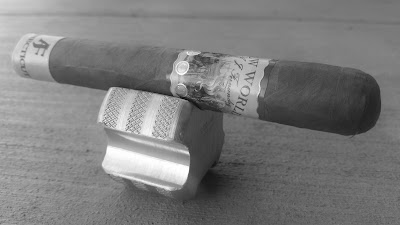 SUMMATION
Sweet, but too tends toward an acidic bitterness at times on the tongue. Light bodied and "eats" like a low-calorie dessert. Smooth 'nuff barely, on a nice creaminess which is braced closely by a sour bit. That creaminess fills, or tries to, many un-played notes via a somewhat limited and wide landscape. Balance is not intricately achieved, but done so in a rather default manner of not a lot going on in any direction. A duet finds easier harmony than a choir, see? Un-complex/nuanced. The Mexican binder seems to highlight instead of cover, some of the Connie sins, namely green notes -- by toasting them into the onset's forefront. Finish is a sweet and sour jockeying for position on surprisingly lengthy legs which includes a slight astringent quality.

A tick light in the hand and a bit of a hollow open draw. Fantastic pale ash grown in a tight sheath becomes a bit darker and more flaky in the second half. Much more smoke off the foot than into the smoke-hole. Much softening of pack as smoked, but doesn't directly affect draw nor loosen seams. Combustion is evenly-lined throughout but also rather quick in spots. Really lends to being over-smoked. There just ain't a lotta smoke satiation. Strength up-ticks at the band and smoke stays cool -- delivered through a nigh spongy nub.

EDITOR'S NOTE
Another sampling of this cigar will be the focus of the next Cigars City Podcast.
Check yer local listings HERE. (I'll do my best to include a link to that, after it occurs.)