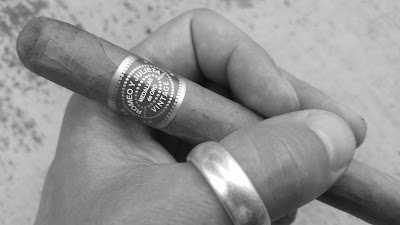 PRE-LIGHT
More veins than I'd like to see, including a crimped one vertically and a sharp one horizontally, oy vey iz mir. Spiderweb veins and lumpiness. Seams are fairly loose and roughhewn. cap is well-affixed. Foot tobacco is a vastly monochromatic auburn packed to a  medium+ density with a tuft looser by a tick at its core. Complexion is an even Connie, but the whole top-leaf looks more draped than tucked. No spots, no under-hue. Mainly matte finish. Cold draw is a sweet cream with some pale dry umami bread grain thing and white pepper some pale spice rack. Medium+ tension on the draw.

PERFORMANCE
Draw starts at a medium+ tension and then snugs further to test those boundaries. Packing loosens two ticks upon lighting. Burn is very even, ash dense and mainly pale grey to light medium hued with a yellow-tannish hint. Smoke out-put off both ends is medium. About an inch in, ash lilts and smoke out-put doth soar off both ends. At this point, draw loosens to a medium resistance. Packing softens again, but seams hold and draw has found its sweet-spot. Ash drops at nigh inch increments and my schmatta is on duty. In the closing act, the resting smoke calms, but a toke rallies bursts of voluminous out-put. In the closing act, ash darkens a tick and the ladder-rungs widen. Drops at three-quarters of an inch or so. Softening of pack has ceased and as the band approaches, is fairly muscular. Smoke picks up a slight greenish hue as the curtain falls. Excellent construction/combustion wire-to-wire.


FLAVOR NOTES
Verily dry umami. Connoting food notes of bread and seasonings/spices but not meatiness. Sour and bitter notes sing a duet which threatens to not let 'nuff sweetness be heard. Balance is bettered in act two, yet not sublime, per se. Bitter notes take the lead in III from sour, and sweetness is better seen -- particularly on the finish, which stretches out its legs. Umami dials back to show this nice bittersweet display. Immediate draw remains somewhat acidic. As the band looms nigh, acidity ramps up as do sweet notes.


FOOD NOTES
White bread, white pepper driven pale exotic spice rack. A hint of ginger. Woody -- that's a food note if yer a panda, I suppose. Leathery -- a food note if yer a fetishist, I suppose... are what remain forefront. There's a sharp blonde coffee note in the middlings. Underbelly is hay, a foot-note if yer livestock, I suppose. Spiced white chocolate is added on the close of Act II. Lots of herbs, too. Also some citrus peel backing.  In the closing act, blonde coffee fills out and a pale nuttiness is found in the broadening breadiness. At the band is a neat and sweet white wine nod. Tea leaves are a smell/taste throughout.


TEXTURE
Creamy with a slight then building tongue tingle. Palate has a tangy bit bordering at times on bite at this offering's onset... smooths an inch and a half in. Surprisingly gruff retro-hale (offers no add'l flavors). Creaminess dials up in the second act. Tingle on tongue moves from tip to far corners and is via citrus (wet) more so than spice (dry) -- cleaner. I can't say it's ever smooth, but it is mainly soft -- although ultimately a tick dry on the mouth-feel. At the end, creaminess dials back to a oil.


ROOM-NOTE
Very tobacco-driven in a light manner. Some pale-spiced hay underneath. A non-smoker might not kick ya out over this 'un. When out-put of smoky ramps up, a sweetness comes in, playing off a sour quality.

ALL TOLD
A calm smoke riled by its binder into something beyond mild in delivery, but not in flavor nor body. Oomph that is a tick outta balance, but lively in its complexities. Dry umami notes and an ultimately woody profile seasoned in an American kitchen by someone of a more exotic heritage. Smoothness comes via restraint, not meekness. Not inherently mellow. Interesting herbs and citrus plays. Notable aromatic tobacco in the closing act. Green notes do hint at a-comin' here and there... but in few and far-between doses... and don't. Again, I believe due to binder. Ultimately, then -- perhaps more balanced of a cigar than I give initial credit for being. 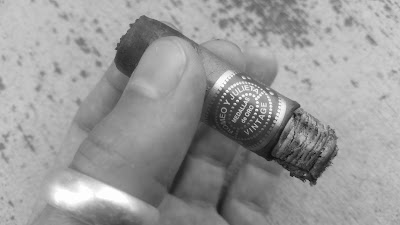