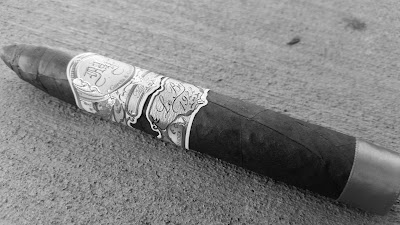 Courtesy of Cigars City and my mad March Madness skills.


SUMMATION
A muffled by cream Peppin black pepper blast on a chewy as heck texture un-muffles sharply and chew thins through the progression of this stick. Too, the construction and combustion soften and uneven respectively. Two full re-touches are needed in its final act. Flavors throughout are a thick then thinning death by chocolate which get watered by a sarsaparilla-cum-cola note. Espresso stays nice 'nuff. Fruits mimic a dry red wine and heavy tropical floral notes ride shotgun. Pale ash is flaky until second half when it darkens two shades and solidifies. Woods are smoked and of a hickory/mesquite bent. Heavy compost under-belly throughout. There is a background of roasting meat umami savoriness. Loose seams, mildly troublesome shoulder, and a failing press. Some combustion woes particularly in the final act when the MF goes plum out twice. Charcoal then a flirting diesel interfere through the second half and purging only somewhat abates. Transitions are there, but serve to down-grade as a whole. The decadent start meets a nigh wispy end of mottled linear bits. A rather spitty mouth-feel after the opening act. Medium to full flavors and body and a medium+ strength that sees unsettling spikes. When good, magnificent. When bad -- disappointingly only slightly above Mendoza's line.

You can please to peruse a full written review of another Le Bijou '22 offering HERE. Meow we have a fantastic base-line with which to begin. Begin what? I've already said too much, gentlepersons...