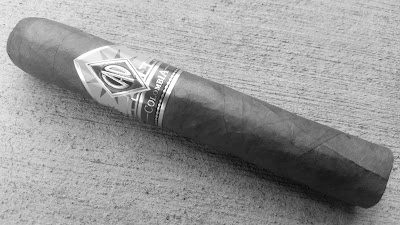 PROLOGUE
I've been a trying boychik, gentlepersons. I have been trying new things, and too, trying yer patience in doing so. Lettuce return to basics, shall we? Here. Have a familiarly formatted review of --

Sample courtesy of Cigars City. Thank ya!
Seems they've only a couple left and at a decent price.

PRE-LIGHT
Natural shade wrapper with some pale tooth and tick or two of coffee bean marbling. Veins are present and too are horizontal across shaft, as well as running its length -- a bit of a personal pet peeve, the first. Only a couple of the vertical varietals are thick enough to show in the hand-feel, yet don't seem to foretell any burn impediments. Seams are not tight, but are even. Cap is affixed a tad off-center and rests short on shoulder. Foot tobacco is a mousy brown with dirty blonde high-lights; eyeballs to a -full density.

Clipping the cap with my Xikar Xi2, I free a medium tensioned cold pull, which in turn frees cold notes of vast similarity to the cold schnoz. There does seem an additional saltiness chasing the sweet bits. Cold finish is sweet and quite lengthy with a creamy oil texture.


LIGHT
Toasts and lights a bit unevenly. Toasting aroma is a sweet soft wood wrapped in leather. First hot pull is fairly woody. Coffee is forefront with that wood and both are sweetly carried on a soft texture. Chocolate earth under-belly is carrying rather high-up. Second hottie is retro-haled and shows a bit of spice rack and a honey flexing in the sweetnesses. Third hot one is an all aboard thing. Wood is spinning off a stronger aromatic tobacco. The texture thins and sharpens a half-tick. Finish is a sweetened brine. Sweetbitter spice.

Draw resistance seems to spill over to medium+ territory. Burn-line is a lit outdoors slight ribbon of medium+ thickness. Ash shows a good deal of magnesium via tooth and is a dense 'nuff pale to medium grey in tight ladder-rungs. Room-note has a sour salted backing on a sweet primary. Foot-smoke is calm, smoke-hole gets a good fill.

ACT I
In the sense of primary flavors, this Colombia ain't exceptionally balanced. Quite briny finish flirts with a mineral addition. Notes have, other than than, remain unchanged as of half an inch in. Earthiness has perhaps toasted. Chocolate up to low middlings from the underneath. A cereal-based umami savoriness comes up to offer a somewhat bettering of balance.

There is some softening of pack but not at the combustion point off of lighting, instead further down in the middle act. Seams hold. Smoke out-put holds. Toastiness finds a cereal quality; nuttiness ensues in a peanut brittle fashion. Medium-bodied with an acidic lilt -- but vastly sweet salt and sour backing. Mouth-feel is great moisture and picking up a red spice tingle even as the creamy texture re-up-ticks. Food jive includes the already mentioned coffee, honey, brine, a new slight caramelized peanut, and cereal grain. Earth stuffs are dirt and woods stem from the earth -- nondescript ones led by an inherently aromatic tobacco that has a zetz of salt in it, as well.

If leather can be seen as an animal representation -- on paper we are balanced. Umami: ticked. I ain't so soitenly so. Although what else would leather be? Please help. Ash spawns some flaky extensions and I roll off a strong inch a' the stuff into my $0.99 Walmart tray, plastic. Black. Ash is whiter, the newer it gets, the burnt offerings in my tray are less oiled than I'd guessed and a tick jagged in texture. Texture... mouth is a bit sharper now. Sour notes muscle up. Wood is attempting cedar.

Packaging has evened out. Burn stays a ribbon off a nigh thick line. Draw stays true, out-put doth as well. Profile is a medium and strength is low+. Pace of smoke is slow and evenly so.


ACT II
Leather and cedar. Sour and sweet. Not much transitioning, at all. A bitter citrus peel is a new note. Tobacco dips to dirt core earthiness and away from aromatic tendencies. A seam loosens at wide, nigh wavy char. Ash complexion evens out at a light medium grey. Mouth dries a tick even as a half-tick of new cream is textured in. Pack is actually fairly firm in hand now. In keeping a running tally of the K A P L O W I T Z scale, it don't actually run... or even move. Very average and staunch dialing in. Past the mid-point, there has yet to be a transition.

One of the more zafik veins pulls away from the ash as it burns and resembles a spent fuse. All other dalliances as per construction hold, with mayhaps a bit more flake. My schmatta whisks, gentlepersons. Tobacco regains some aromatic qualities and the cedar gets a dose of salty sweetness. The two pair quite well up-top. Middling is the aforementioned food talk. Under-belly is a dirt with the lower middlings of caramel ad coffee dripped into it. Acidic stuff dials back some. Cereal or dry umami, or savoriness doth too. Strength ups a tick to a -medium realm. At the end of the middle act, honey braces the cedar from its spot in the upper middling. Pretty nice now, this CAO. In a simple sorta way.


ACT III
Draw gets a bit hesitant here, and the shaft as well as smoke heats up to a robust tepid. Flavors lose their calm toastiness on account of this, and too, bitter some. Room-note sharpens some and smoke greys just a bissell. Shoulder seems to loosen.

A few pulls later and the draw returns as the pack softens throughout. Flavor notes are locked in with perhaps a more noticeable nutty peanut brittle, albeit via somewhat bitter jabs. Texture wavers as ever and in the same spectrum. Temperature slowly warms. Funny, I spoke to average. Lettuce see that as medium. This Colombian should be a comfy medium, instead it runs from frustratingly mild to failed muscular at varying times. As if it ain't comfy in its own skin, or top-leaf, as it is. Nice zetz of caramel at the band and it's carried in by a return of cereal grain.

Removing the band causes no hiccups nor bugaboos. I keep getting loose leaf from the cap in my maw. Line is still a ribbon and occasional ribbon, but thinner now. Smoke don't cool, but the heating ceases, as does softening of pack. The remaining nub is rather oily and the body is a tick more full than ever it was. Still not overly balanced of a profile, but the imbalance is of a kindly bent now, with umami returning and sour/bitter backing down. Saltiness stays at the same high level. Rich, yes -- but too lacking in depth of said richness.


A good stick at a fair price, just not one to fawn over. Stick it in yer smoke-hole and "Git-er-done," or whatever the goyim like to say these days. Bit of a gravely feel at the end of the medium+ legged finish. Bittersweet, now. I believe I'd last said sweetbitter. I don't read this stuff -- or oft recall writing it.

PAIRINGS
Loganberry Manischewitz. Go meshuga with Cherry Manischewitz in the final act. Go far off the deep end (but not really) and pour the cherry kosher wine over a scoop of chocolate ice cream... thank me later. 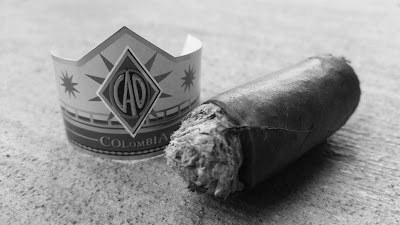 EDITOR'S NOTE
You can here me read this post HEAR.