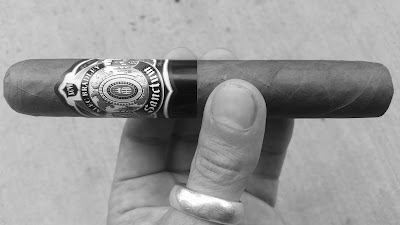 PROLOGUE
I don't mean to brag, but I managed to successfully eat a half-cup serving of cottage cheese with breakfast today. The stomach flu hath officially flown and I am back on dairy, gentlepersons. Huzzah, indeed. Now, lettuce look at --

Hello, and thanks for reading Kaplowitz.xyz. Brown is a milky chocolate varietal. Some coffee bean marbling over-top. Underneath is a banana cream hue which ticks up further to the surface alongside a thicker vein or two (in 1/3 and 3/3). Those veins are only thick by comparison and of no foretelling impediment. Overall, veins are scarce. Some shy of medium amount of spiderwebs. Seams are tightly-hewn and even. Cap looks tripled and placed well 'nuff. Foot tobacco is a mainly mousy brown with a strawberry blonde high-light here and there.

Hand-feel is a shaved peach texture. No bumps/lumps. Medium+ firmness of packing, and evenly so, off a Charmin squeeze. Verily hefty and well balanced. There is a slight pimpling of tooth to the eye, but it ain't felt on the hand. Schnoz is a fairly heady bouquet of one: chocolatey, creamy, nutty, woods. The slight pepper-play of the shaft is enhanced at the foot. Cold draw is creamy red spice on a earth/wood underbelly, which drives. Chocolate is there as the red spice fades. Food notes, feh! A sweetly balanced bittersweet profile with an underlying umami and up-front rich cream. Either way ya says it -- it leaves a salty note on my lips.


LIGHT
Creamy woody earth. That's what I gets off toasting the foot insofar as aroma. Perhaps some weakly brewed java. First hot pull is a salted earth note on a very rich and creamy texture. Finish sharpens a bit as red spices are introduced a bit behind of up-front. Some buttery black pepper is with them and leaves a tingle on the tongue. Wood pushes from the back. Second hottie is a retro-hale introducing a nutty note after a red spice and black pepper tandem front. Some red peppers linger in the wood on my palate. Third pull is richly flavored via a nice balance of primary tastes with the injection of a supple leather riding very close to the full and creamy texture.

Excellent smoke-output from each end. Draw is a medium tension and a sip doth satisfy. Foot-smoke is a sweet creamy earth/wood mixture of a room-note, and released at a steady pace. Line is dead even. Pack density did not budge against the Djeep lighting. The ring gauge is a bit cumbersome in my smoke-hole, but fits well in my mitt. Medium+ body; medium flavor; low+ strength -- outta the gate and early on.

ACT I
Almond paste. I get that from a lot of Alec Bradley offerings. I get it here too, to be clear. Spices dial back but still strongly contribute. There is a greater space between they and the black pepper with dash of red, but both are very creamy textured as well as flavored. Earthiness gets an animal musk note and umami is triggered as if I'm at a Sizzler. Sour notes notch up via a blonde coffee addition. Bitter too climbs with a darkening of the chocolate notes on the back of more baking stuffs. Mouth-feel is perfect moisture and rich with cream, but a pretty spice doth cleanse the barnacles well, ye matey.

Combustion and construction hold in a top-flight manner, for any top-leaf, let alone this oft tricky one. Body and flavor equal out at a medium+. Strength is -mild now. Complex, not quite. Nuanced, yes but delivered so smoothly as to nigh forget. I'm getting tired of holding this full-figured lady -- but I ain't getting tired of smoking her, gentlepersons.

Wood goes increasingly sweet, and cream ramps up throughout. Musk grows, as well in a distinct smell/taste on the draw. Citrus vibes in, but in a non-acidic way. Ash is a pale grey sheath with a singular tick of flake in its solid inch. I have my schmatta out, but just for show, fo' sho. Burn-line is even and of a -medium thickness. As I type, there is a brownish hue coming into the burnt offerings. Toothy crystals are becoming bedazzled. Pace of smoke is a tortoise and the hare, well, screw 'im.


ACT II
Almond paste toasts a tick and I ain't cleaning that fry-pan, gentlepersons. I mayhaps jinxed the combustion, as the line starts to ribbon, then sharply so. Top-leaf seems a tick hesitant. Packing softens a smidgen from line to a nigh half inch down. Draw says consistent. Pacing is almost too slow. I'm doing all I can to allow a self-correction of line which apparently wants to happen. Flavors are unchanged, texture is maybe a hair less creamy in spurts. Personal preference here, but the RG is a bit much for this dainty fella. Umami is mainly in the leather note now, which is mainly in the earthy bits. Verily earth and wood. Too, creamy with a sweetening spice and dialing back peppers.

At the second act's close, and after only a teeny re-touch was mandated, this slow-poke Sanctum has seen its ash darken with a charcoal marbling. It's density has remained unchanged, humsover. Softening of pack ceases. Profile remains holding fast. Very oat bread laced now. All else still on-board. Semi-sweet chocolate oomphs. Wood, earth, leather, vastly. Creaminess re-builds on mouth-feel, tingle is away on vacation. The re-touch responded well, but we're a tick wavy again. I don't make a show of growing ash, but I know some 'a ya does. Don't with this AB, the burn doesn't need that insulation.

ACT III
I'm beginning to feel as tho I've embarked on a three hour tour. Although the weather ain't rough nor is my tiny ship lost. I believe those are the approximate lyrics. I need a person to do my Googling. Also, a female for my email -- thank you, Ted Turner. Just a brilliant quote. There's a tick of a nick in the top-leaf where my mouth rests. It ain't helping the big ring gauge feel comfy therein. Smoke-output from both ends has increased two-fold. A bit of a bitterness is emerging from toastiness. Then: peppers return. This time in a more produce style fashion led by a peppercorn thing. Still, all is creamy and this is not a zetz, per se... more of a welcomed happening.

Other notes become subtle foreground now in the mid 3/3. They act as sweetly bracing nuances to the pepper-play. In short order, red spices join them betwixt top and under-belly. Strength is a gentlemanly medium. I'm excited to have Cheez Wiz atop my lunch of potatoes and eggs -- altho I'm near certain that don't qualify as dairy.

There's a bit of a cardboard vibing in-and-out at the cool and solid nub. Smoke stays of a comfy temp and its texture gets a last dollop of cream at the mid-band.


EPILOGUE
I'm thinking of unionizing husbands. Demanding workplace rights, etc. Inquire within re: how to assemble or join yer local UAH. #WifeStuffs t-shirts and hats soon. Sign-up is open for our Cigar League.


EDITOR'S NOTE
Please to read the K A P L O W I T Z Scale of this offering HERE.