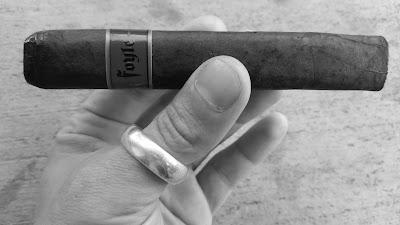 PROLOGUE
I do not remember yesterday. I took zero coffee in and was lethargic throughout, or so I've been told. The good news is I stopped with the teeth-grinding and feel loads better having done so. Also, I feel loads better being back on the joe today. I promise to stop as soon as the jaw clenching starts. Yes, I practically promise. Maybe I'll just switch to tea post-lunch. Maybe some chamomile at bedtime. Sounds dreadful enough to be a good idea.

PRE-LIGHT
Broad veins, lotsa spiderweb veins, and uneven seams. And that's after a box-pressing tact is employed. Complexion is a dark chocolate bar with espresso bean marblings over-top. Thick oils are schmeared evenly but thinly in a nice healthy sheen. Held up into the morning sun, there is a burnt sienna under-hue which surprises me. Cap is affixed neatly and nicely 'nuff. Foot tobacco peeks out at a -full density of packing, showing nigh monochromatic auburn locks. The band on this thing is glossy and finished well with a bit of raised lettering. It's a nicer glimpse of art to mine eye than this Maduro offering's brother, the Classic.

Hand-feel wise, the 55rg is a good bit much even in a pressed format. Although it feels a good few ticks better in my smoke-hole than mitt. Balance seems to want to tip toward the cap-end, but not terribly so. Wrapper is very velvet and thick, sturdy. It's oils transfer readily to fingers. Shaft notes are schnozzed to be sweet earth woodsy with cocoa leanings. As dusty red spice on the top-leaf turns sharper and more pronounced off the foot tobacco. Earth note is heavily compost-laced. I CLIP THE CAP with a deadly precise mechanical snap of my Xikar Xi2. Cold draw resistance is a medium tension. Cold notes delivered are a red spiced cocoa buried in barnyard. Espresso bean is there. Some trace woods.


LIGHT
Toasting the foot (wooden matches are employed) lets loose a woodsy aroma backed by composted earth and barnyard. Slight cocoa vibe. Mainly of note is that it's a patient affair -- it takes a bit, then another bit, then finally a last single tick -- to get toasted up. During this procedure, the box-press softens some. First hot draw is a nice creamy texture with notes led by heavy earth and backed by wood extensions and a separate espresso. More earth in the middling and under-belly. Chocolate nigh dark fudge is the mid-middling along with a red spice rack, and in the earth underneath is a red fruit vibe. Second hottie is retro-haled to a heightened red spice with a slight red pepper addition. When that zetz clears, there's a fruit fruit juice flirtation. Third hot tug is a marrying of the first two and it seems we've settled in, gentlepersons. As a married man, I had to see any further marryings.

The nascent ash is white with signs of flaking. Burn-line is razor-thin but too, uneven. I'll allow it every chance to correct itself off an outdoors match lighting. Notes being delivered are not as robust as they normally doth appear, and this Foyle ain't airy, just not as heavy as its notes would perhaps indicate. Profile is a -medium thus far. Strength has yet to come a-knockin'. Smoke out-put off the foot and into smoke-hole is an impressive thing. Packing has continued to soften, and the box, round. Seams hold. Draw is even tension'd. Not a bad start at all.

ACT I
The red spices get a new inherent sweetness I can't quite pin-point. Espresso note dials back, compost dials up. Compost too is sweet, via reddish fruit juices. Wood note seems to be in no hurry to develop. Burn isn't evening-out but isn't wonking any further off course. Ash is pretty flaky and I pull my schmatta outta my back pocket. Very smoky, this Foyle. If you had plans to sneak a smoke, and chose this offering, the heavy out-put of voluptuous blue-tinted clouds would... foil... those plans. See? Because Foyle and foil... I'm sure you get it, gentlepersons.

If you like this sort of humor, then please continue reading www.kaplowitz.xyz, the internet home of that sort of humor.

Chocolate no longer attempts at fudge brownie and is now a Oreo cookie sorta thing. Moistness comes from composted earth bits and a far dialing back fruit. Wood becomes a greater focus, but is yet to have developed into a less generic note. Simply, it is wood, and it seems to be spinning out of and off of the driving earth bits. I have a hard time balancing the Foyle in my $0.99 Walmart ashtray. I try to find the stick's gravitational center and am twice... Foyled... in my attempts.

Ash has made a solid inch in un-solid fashion. Matte white, and fairly flaky and with a tick of lilting in its cracked sheath. Profile is a thin medium now, and strength still ain't a-knockin'. Perhaps it thought my van was a-rockin'? I have no van, gentlepersons. Combustion is slow and steady. Construction has ceased its softening and seams have not loosened. Mouth-feel is a light sweet cream with very nice moisture levels.

At the end of the opening act, chocolate again tries to moisten, red spices are mere whispers, fruit has hidden, and earth is driving with a wood addition. Earth is a compost/barnyard. Finish is medium legged and sweet earth, as described. Straight-forward stick, but not bad at all. Performs well and delivers nice 'nuff tastes.

ACT II
Espresso muscles up. A new peat is mixed into the already earth-based profile. A gamey molasses note teases in. Burn is slowing. A retro-hale is a zetz back to Oreo chocolate wafer/cracker. Not the cream, just the cookie. Ya ever eat chocolate tea biscuits? That. Except the tea here is espresso. And I'm enjoying it whilst buried under a compost pile. I think I taste topsoil. Would I be tasting topsoil underground? Sure, I'll take another shot of espresso. Thanks for offering.

I think this Foyle is sending out even more smoke. For all the out-put tho, not a lot of room-note. On the draw, a new dark suede comes in as the second act closes. It envelops the earth aspects and rears in its tentacles. Perhaps we'll see more stuff on accounta this. Combustion is beginning to impress in its marching onward, slowly. Construction-wise, a tic of top-leaf has cracked just shy of the band, but all is holding, as is draw tension. Draw is truly pretty durned impressive.


ACT III
I'm hoping the cracking wrapper ain't an issue, as it's spreading and now under the band, which I'll soon have to finagle carefully off. There may be some leaking there, as well -- as the burn is lagging in that area. The now suede-corralled compost, barnyard, peat melange is still not allowing a further development of free range note. Wood is still wood. Chocolate ain't hefting-up, and fruits nor spices have re-surfaced. Kinda just a narrowed delivery of the same profile which still ain't as robust as I'd hoped. Nice, tho.

Legs have shortened on the finish, but it's goodly clean. Creamy bits are dialing way back. Espresso does get somewhat of a crema. Band gets removed sans incident. Strength is a -medium and profile, medium. Ash drops quicker, not making an inch the last couple/few times out. A seam loosens at the burn and on down the remaining couple inches. Smoke thickens and gets brownish tint. I purge to side-step a building up of tar.

The body here has dipped some, and the draw now mainly offers up cigar notes. It's a nice 'nuff tobacco, dark not deep. Retro-hale only adds a slight smoked charcoal. Maybe a teasing of black pepper. Smoke pours off the foot. Construction isn't further hampered by cracking top-leaf and that cracking isn't spreading. A seam is loose, but not loosening. Draw stays excellent and delivers cool smoke to the nub. Toothpick me, barkeep. Make it a dirty one.

NOTES
Decent and serviceable smoker. For a something more complex or at least interesting, I'd steer toward the Foyle Classic.


PAIRINGS
Concord Grape Manischewitz. Coffee any way ya take it. Spiced tea. I once saw a fella drinking Tai Chi whilst doing Chai tea and I was like, "Hey! Yer gonna nrub yerself." He laughed and his Vegan breath about made me vomit. 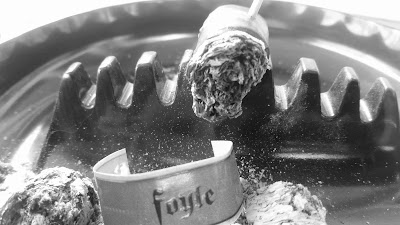 EDITOR'S NOTE
Listen to the audio version of this review HERE.