I should note: this cigar was shipped to me, and in every shipment, there is risk. This Gurkha seems to have taken the brunt of said risk -- or perhaps it's simply a Gurkha being a Gurkha. In closing, Gurkha. NO. Not closing. To be clear, the top-leaf came to me quite flaked. Thusly not of a cigar review quality; although perfect for a Weekly Boxing Review. I forgot a pre-light photograph, and my apologies with and for that. Here -- please to consume this one: 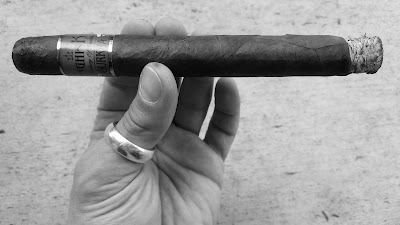 BERTO TKOs ORTIZ IN 4
Berto came up the middle a bit more tightly than Ortiz could deal with. Ended it with a pretty uppercut. Fairly simplistic fisticuffs. A nice bit of revenge for Mr. Berto, but what now? What next? And what for Mr. Ortiz? As an aside, but none too far in our given context, gentlepersons: cinnamon, cardamon, and a definite mintiness are on the immediate draw of this Genghis Khan. Its rickety wrapper holds. Smooth draw, evenly so. Ash is 50/50 salt/pepper fercockt, split and un-holding. Very sweet and dark earthy under-tones. Clean finish with a slight spiced tingle on the tongue.

As to Andre Berto, perhaps it will be a showdown with WBC Welterweight Champion, Danny Garcia. Mr. Garcia handles well, this challenge methinks. As to Victor Ortiz, I do not see how he contends ever again. I had previously made mention that this fight excited me because either man, upon losing, would see that fate unfurl before them. To the victor (not Victor) go the spoils... although the spoils seem to be purely in he context of this squaring off, alone.

How poetic was this Berto-Ortiz rivalry via a tandem of prizefights! This ending following their beginning; as endings tend to do. Their first bit of shared pugilism was for far greater stakes and looked so much further to the future. Might I interject here upon myself that Berto played the bigger man role here in a way that a younger and more constantly attacking and smaller Ortiz would not let him in Act I. Nevertheless a good, very good, tale of fisticuffs played out over the span of some half decade... at the start of which, as stated, to the victor had nigh untold spoils of the future. Although that didn't prove to pan out -- so perhaps...

FURY TO RETIRE AFTER KLITSHKO REMATCH
"Good! Use your aggressive feelings, boy. Let the hate flow through you!" - Palpatine

I've said it all before. Say it again, I shall. I am liking Fury's chances more and more as each day passes. As he further is removed from drink and from cheeseburger. As he hatefully delves into camp. As the pounds fall off and the sharpening pours on, and the hate. Now he wants to quit the whole dang sport of pugilism-- gorgeous, that.

Transversely, the emotionless Dr. Klitschko continues to doth emote. Yes, I like Mr. Tyson Fury's chances all the more. Of hitting camp a slob and leaving an only slightly slovenly Adonis. Ready and primed and peaked for an angered up Wlad. Prizefights are oft won prior to the first bell. And that first bell shall be within deft earshot of Big Ben... yes. Yes. What Palpatine said.

Anything but a quick return to Eastern European slumber for our Heavyweight crown.

Ash on this Ghengis Khan is paling. Smoke on this Gehgis Khan is pouring. Not very many a change in flavor profile; a building of tongue-tingle, yes. A further crackling of top-leaf, yes. Strength is a -medium at a couple/few inches in. Decent pacing of smoke. Some more exotic lilt to spices. Burn is evening-out. I'd kill for an evening out -- I'm just afraid my wife would want to tag along. Alas. Too, I'm seeing a nice bit of Cameroon binder. Actually, There is a seam now, flying loose of the shaft of this Gurkha. 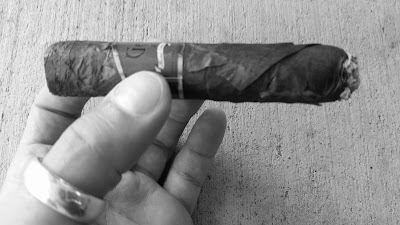 JACK/BUTE ENDS IN DRAW
Very typical to Gurkha flavor profile with a tick more of the exotique. More foot-smoke, epis! Heavy out-put albeit in a thin-ish volume which is as far from voluminous as a marathoner's waist-line. Some greater zetz of soft leather. An uptick in strength and profile. medium and medium+, respectively.

Mr. Badou Jack seemed to do enough to win against Mr. Lucian Bute, but one judge scored it 117-111 for the champ, while the other two had it 114-114. Unanimous Decision Draw -- like kissing yer first cousin twice. Once on each butt cheek.

Nevertheless and humsoever, Jack did so his crown thus setting up a title-unification 'showdown' with one James DeGale later this year. Actually, in the co-main event, Mr. DeGale won a hard-fought unanimous decision over game-challenger Mr. Rogelio Medina. My forecast: This Gurkha is gonna ka-blooey like a circus clown prop cigar. Also, its flavors are muting and my mouth-feel doth feeleth dryeth and a bit vacated. Strength to medium. Profile follows suit. Also Badou Jack has a lace-curtain mentality about him, gentlepersons. DeGale don't as much.

MAYWEATHER: YOU JUST NEVER KNOW
There is an age where once reached, a man sees his father when he shaves in the mirror. There is an age when a man should not be dressing like a ten year-old boy, regardless of current acceptable fashion. In pugilism, there is an age where a practitioner retires between each bout. All these ages run quite concurrent, actually. Surprised? Me? Not a lick. Either way.

Long and short time, gentlepersons. No one beats Money. Besides, he wouldn't fight that fictional person, either. Allow me to rephrase and retract/clarify. There is possibly one person who beats Mr. Floyd Mayweather; and it's not truly this person -- it's simply whom-so-ever that one too many opponent might be. To be crystal -- we ain't there as of yet. Love him or hate him, he's the best of his generation -- gloves down and. Or perhaps it's Hopkins... I wish there was an intelligent podcast wherein this were discussed. Other things of that ilk, as well. I wish this podcast was maybe called Radio Palooka. I've said too much.
K A P L O W I T Z SCALE
Appearance n/a (damaged in shipping)
Construction See Appearence
Combustion W
Flavors/Body O
Strength L

I can't believe this thing smoked through to the nub -- where it got hot on the mouth and thin on the palate. Thanks for reading, gentlepersons. As ever and always, Muah!