Please listen to this, yesterday's pugilist-centric Kibbitz. It almost served as this week's Boxing Review -- but it felt as if I were being lazy or at least lax in not offering you, Dear Reader, this. So here are three more headlines for yer hopefully pleasant perusal. As always, thank ya kindly for the loan of yer attentions.

AREOLA AND POVETKIN KEEP IT POSITIVE
The hand-feel on this Gurkha is silky as all get-out. Box-pressing is on the gentle side and density seems a tick under-stuft. Cold draw notes of highly creamy milk chocolate and cedar, predominantly. White bread and white pepper get added whenst match is applied.

We now know Chris Areola (36-4-1-31) tested positive for marijuana in a sample taken after his December 12, 2015 split-decision victory over Travis Kauffman (30-1-22) in a fight which was scored 114-113 on all cards. A third-round overhand right by Mr. Kauffman landed to Areola's temple, causing sir's tuchus to in turn land on the canvas. Interestingly, the two pugilists had at that time been in the ring with one another for some 200 sparring rounds. No wonder an even-keeled fight was fought. Familiarity often breeds just that.

Also interestingly, and reported above, is Povetkin's second positive drug test for Meldonium, a performance enhancing drug (read: 'roid). Mr. Alexander Povetkin (30-1-22) had the right to request Sample B be tested after Sample A set off every metal detector at the courthouse. He invoked said right and yes, cue metal detector mechanical screechings. Povetkin admitted to using the substance which is banned by The World Anti-doping Agency, but said he last did so in September. Humsoever, that time-frame does not line up with these test results.

Ash piles on loosely and somewhat flakily in grey complected variances. Milk chocolate, creamy cedar, a somewhat immature tobacco with a white pepper attachment which comes across as potentially bite-prone. Dirt underbelly. White bread lacings. Not much of a finish. Mouth-feel is a nicely moistened tingle. Room-note is kind and sweet. A coffee note sidles up to the medium profile. Strength is mild.

(Hippie) lettuce look at these substances briefly, gentlepersons. Allow me my opining of a very certain line drawn betwixt performance enhancing and performance, shall we say, de-hancing. Weed, as the kids call it, is a natural pain reliever (of little clinical proof for a plethora of reasons) which is non-addictive. Meldonium makes one even more Drago-esque than posited in the promotions leading up to the now cancelled Deontay Wilder affair. One substance offers an unfair physical advantage. One substance is a smokeable aspirin which pairs well with Tecate and tacos. Please forgive my sheer envy and usage of Latino life-style stereotypings.

Mr. Areola has been wrist-slapped with a 90-day retroactive suspension, although his victory over Kauffmann has now been deemed a non-decision. Mr. Povetkin has not as of this writing been punished by sanctioning bodies -- but his fight against Mr. Wilder is looking less mandatory by the hour to these eyes. Which should sit well, also to these eyes, with any fan of Deontay.

BELLEW WINS WBC CRUISER-WEIGHT CROWN
And the new...
Mr. Tony Bellew (27-2-1-17) has "fulfilled his dream" upon becoming the WBC Cruiserweight King with a victory over IIunga Makabu (19-2-18) via third-round technical knock-out at Goodison Park this past Saturday.

This glove'd practitioner of life imitating art, as he portrayed "Pretty" Ricky Conlan the lineal Light-heavyweight Champion and pound-for-pound King in Creed, a flick I have not seen -- is currently laying his newfound gauntlet down in front of David Haye (28-2-26). Stated gauntlet has been swiftly picked up, regardless of weight-class, by the Light-heavyweight champion and oft Heavyweight via social media. Truly and verily, I do so wish for Haye to simply go awaye.

Gentlepersons, I am now fully in the "Gurkha experience." Two re-touches on a fercockt burn have yielded limited positive results. Flavor notes are unchanged, lest a dustier delivery of the dirt under-belly. Too there is a vibing in of a sour note attempting at a dry white wine under my tongue.

REMEMBERING JACK DEMPSEY
Born William Harrison "Jack" Dempsey on June 24, 1895, the legend of pugilism died this day in 1983. His reported last words were to his wife, "Don't worry honey, I'm too mean to die." Proving that Hashem doth require the souls of even those tough as nails. I will not attempt a recant in this short space, such a career for the ages, of such an epic man. I only wish you to recall all of this on yer lonesome.

I too shall not dabble in questioning Mr. Jack Dempsy's talents within the confines of any era save for his own -- which he ruled unquestionably so -- even as it unfurled its changes beneath his black-booted feet. Here's to you, good sir, I only wish I'd have a finer cigar offering to raise in yer honor. Doth I sound pretentious?

The Viper offering remains unchanged in sub-par construction combustion. Flavor notes are the same and given on a thin line. The draw is even at medium, but offers varying bursts of smoke to smoke-hole. Sour notes ebb and flow, and their white wine vibings are now mute. At the dawning of 3/3 the line is nigh even at last. Then the stick goes out.

I'll re-light and tend to my roses, hang some hand-washed laundry on a sunny line. A toasted caramel nuttiness flirts in.


EDITOR'S NOTE
In fairness to the Gurkha Viper offering, its last third served me well 'nuff in a stogie sense. Do coffee or a Honey-Do list as suitable pairings. Oh, it went out again. 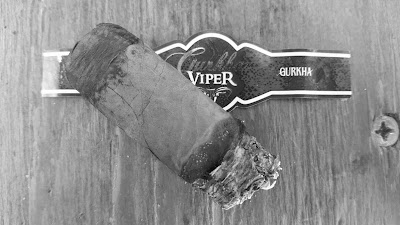