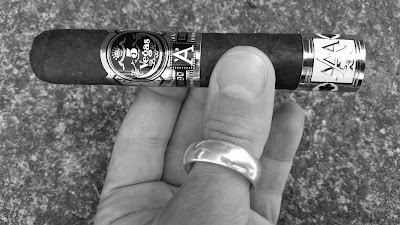 
LIBATION
(as this is not a review, per se)
Diet Pepsi
Poured from a 12oz can into a coffee cup on saucer
... Because appearances, gentlepersons

Firm, stiff, thick, and dark... I don't know where to go from there -- in a PG manner, at least. Plus, it is only 5". Rugged. Seams are shy of tight, but even. Lots of fine-grit tooth. Chocolate, purple fruit, and red spice aroma on the shaft. More red on the foot. Very chocolate compost cold draw.

It's always a tick of a let-down when a prizefight is cancelled; let alone one for a heavyweight crown. Nevertheless, we soldier on. Since then, that is what we do, it is well-known that an army marches on its stomach. 5 Vegas is my cigar comfort food. Too, it pairs most perfectly with a bit of pugilism.

Unrelated: why does Cinco feel to me, my version of Daddy's Te-Amo? Any-ol'-ways...

"I JUST WATCHED TWO SHITE FIGHTS!"
- Lamentation via Facebook, of my UK pal.


HAYE KOs GJERGJAJ IN TWO
He murderized the bum. Although the bum, on Arnold Gjergjaj has been in the ring with the like of Vlad Klitschko and Tyson Fury. As a sparring partner. Curious, really, that he was felled four times in half as many rounds at the only somewhat above the Mendoza-line power of David Haye. Mr. Haye put in a very normal to himself outing -- outside of the fisticuffs' abbreviated length. He is fast, strong, and carries his hands low and jaw out.

Will Mr. Haye use that jaw in a talking sort of way? In a manner which gets him now, the winner of the upcoming Fury/Klitschko II? What of his countryman, Anthony Joshua? The other fight on 5/21/16 in the O2 Arena might have substantial bearing on A-ing those Qs...

Ash is pale grey with some charcoal and airy in viualized texturing. Very tingly mouth-feel. Woody. Nutty. Chocolate covered raisin vibe. Strength ain't sent me to the sugar bag yet. Profile is a medium+ in a caveman sorta way. Blunt. Black pepper on the retro-hale. Some espresso in the compost under-belly. Line is a tick waver'd, but OK. Draw is smooth but the dang thang rest in great largess in my smoke-hole.


BRIGGS BESTS ZARATE IN FIRST
This prizefight marked the seventh opening round knock-out for Mr. Briggs in his nine comeback fights thus far. Bally-hoo? One or the other, and not both, gentlepersons. Let's say "hoo." Simply because that's what most folks say in response to the name Emilio Zarate.

A man of boisterously motivational and inspirational regret, is Mr. Briggs to mine eyes. His prime, he knows could have been much more, if only he and his actions were. Now, at 44 years of age, he looks to make up for lost time. Or at least cash a paycheck or two more...

That stated, what is next for Mr. Haye might very well be Shannon Briggs. Name + Name = Moolah. Granted, the equation is on a smaller level than other less feasible Haye alternatives. Who wins? Easily and simply, it is Haye long and Briggs short. My money is on Briggs short. Regret + Aging = Motivation. Here you are at a boxing post and math breaks out. My sincerest of apologies.

Interesting to see, is the winner's potentiality in garnering a fight versus the Fury/Klitschko winner. Because neither needs a bout against a prospect. Neither wants yet to be an admitted gate-keeper. There's too little monies in that.

CANELO ABDICATES
From his post Khan fight bravado, it was a somewhat surprise to see Mr. Alvarez hand the WBC crown to Gennady Golovkin. Somewhat. To be clear and in no one's defense: what actually happened was that GGG was already the interim title holder, and Canelo allowed the "interim" to be dropped. Regardless, it looks bad. Yet I will never call a pugilist a coward nor engage in talks of ducking. I will say Canelo is notoriously predatory in his catchweight leanings and GGG is not desperate enough to fall prey.

Nor shall he in the ring, to my guess. That said, it is being reported that talks have hit the skids. Shine on, GGG. Light of the division... your division. Shine on, you star ya.

Notes have thinned some in this Cinco AAA. Strength is up yet manageable even by my lightweight standards. A smooth thin cream sets in on draw and mouth-feel. Quite fruity, a decent and good Maduro. Darker chocolate now. Somewhat of a quick pacing here. The retro-hale picks up some dusty herbs. I taste the backseat of a NYC cab. Is that the Te-Amo? I'm car-sick. Ah, strength is up-ticking. Nice steady smoke out-put off the foot and a satiated smoke-hole, as well.

WILL LARA CUT IN ON THE CANELO-GGG DANCE?
He wants to, don't he? Being as it ain't never proper to answer question with question, lettuce delve. Seeing as though Erislandy Lara gave Canelo at least as much as he could handle in 2012 via a split-decision which some say Canelo was gifted, I don't see a rematch. There's not enough in it for Mr. Alvarez. Golovkin might tinker with the idea if he sets in his mind to clear out the division and not move up in class -- which I do hope he doth doeth.

Mr. Lara is no push-over. His losses to Canelo and Paul Williams let every other boxer let out a sigh of relief. No one wants to fight the sir, ya see. But Golovkin is not typical. He will; but it is not a match on the front of his stove-top. In many a way, I'd prefer this bout as a spectator, but too realize what the sport now needs is for one Mr. Saul "Canelo" Alvarez to step up and allow GGG his reign.

At the band of this 5 Vegas AAA, I get a zetz of root beer. The herbal notes have stayed and stave off a linear affair. Compost matures nicely with a purple fruited sweetness. Espresso flows freely and a nice crema floats atop it. A red and green pepper join the black. Red is on the immediate draw, green on the finish. That green pepper sets interestingly with the herbs. Mouth-feel softens. Nice moisture there. Strength? Is the fight on, or is it that my bell ringing?

I'm enjoying this cigar. I want the cabbie to take the long route, the sun is out and birds are tweeting. I'll just tell him to take the shortest route possible, sit back and long-relax. My porch is a-callin' and I shall abide, gentlepersons. It's at the front of my house, no -- now which-a-way is that? -- 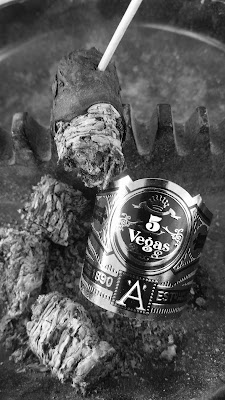