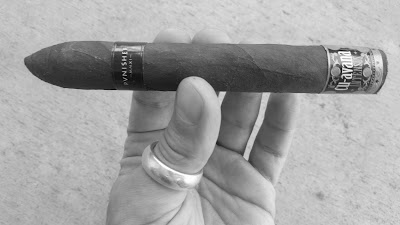 Thanks goes to one Mr. Martin for this offering, and many others.

PRE-LIGHT
I actually like the graphic design here on this Cu-Aavana, although I generally dislike the threatening visuals and idea. I'd rather not be dared to smoke an offering, thanks just the same. Nevertheless and as stated, I like the look. Let's start with hand-feel, shall we? As that is noticed firstly by moi. Dry and toothy. Firmly packed sans a soft spot in the 2/3. Feels a tick light in heft and sounds hallow whenst I thump my ring with it. Balance is a hair off, but to be somewhat expected in the given format.

Visually, I'm looking at a matte dark chocolate with some espresso hues added into a somewhat uneven complexion. No real under-hue, a tick of brick red here and there. Tooth ticks the coloring up to a lighter brown here and there. Ligero is darkly visible at the foot as a brunette. The rest therein is brownette. Medium+ density to the eye-balling. Schnoz notes are Simply dark tobacco and soil on the shaft; some nutty red spices get added at the foot.

I cut the tip with my Xikar surgical precision war machine Xi2. It cuts. Cold draw Is a black bread and chocolate front. Behind is soil and earth and espresso therein. Nutty finish. I don't taste peppers, but I feel them as a bit o' warmth on my tongue and cheeks. Or maybe I've just been brain-washed. Notes are quite dry. There's a chemical aspect there now, as I cold tug a couple more times on the medium+ resistance draw.

Hot peppers and Ligero, I'm glad I'm fresh 'nuff off a bagel and lox. Review spoiler: I taste salty fish throughout the 1/3. Kidding, fresh as a daisy, my palate be.


LIGHT
Black pepper, hardwood, leather under-belly. That's the aroma off toasting the foot of this Punisher Intensus offering. The affair is not an overly easy one, as it's hard to get an even catch on the thing. Worth noting, however, is I am out-of-side and armed with a Bic, because I can't seem to recall to replace my Djeep. First hot pull is thin bitter espresso with some vague pepper addition which is again a feeling as much if not more than a note. Wood. Leather. Black bread and earth. Second hottie is retro-haled out of a misguided and ill-advised sense of review duty. I taste pain. Black pepper and red pepper eventually drop to my palate and ghost my naval cavity, after the storm clears. Third hottie shows some more espresso and a bit of almost molasses via a dark sweet liquidy note an the end of draw.

Oily mouth-feel. Medium+ profile, -medium strength. Line is a ribbon. Ash is medium to charcoal grey in loose ladder-rungs. At the far end of long finish, a cream is on. It wraps around and into the next pull. Throat is catching a bit. Packing has softened considerably against the light. Draw is down to a medium tension and smoke-hole is a readily satiated and tingly oil-slick. Nice moisture level on that mouth-feel. Smoke off the foot is medium+ volume and spinning off a simple tobacco room-note with some spicy sweetness of nondescript leanings.

ACT I
Dark chocolate comes up, as does espresso, but separately. Nutty notes are mingling with hardwood and it's tough to pull a more definite labeling from my tuchus than that. Strength is a good medium and sharp zetz now. Black peppers steers from up-top. Underbelly is topsoil and black bread. There's an advancing chemical vibe that hits on the immediate draw and stay through the finish. It's sharp and lettuce call it kerosene. I keep expecting more peppers... let me clarify: not more insofar as volume, but array. I'm tasting vastly black and the red is trailing off. A retro-hale is kinder now, but doesn't add to the profile. Wood sharpens a tick there, mayhaps.

Newer ash is tighter ladder-rungs and a paler shade of grey. Burn-line is evening out, but not even per se. Mouth-feel is actually quite nice. Pace slows a tick here. Out-put of foot-smoke dials back some, but draw stays even and filling as all heck. Softening of pack ceases but as of yet, is not re-firming. Seams hold well, however. An inch of flake gives me a heads up and I drop it in my $0.99 Walmart tray. Molasses comes up. I'm enjoying this Cu-Avana a good deal more than I'd have guesstimated, gentlepersons. Still, there is that kerosene quality.

At the opening act's close, there is pepper and chocolate up-top. Middling is close at its heels and the top there is a bitey espresso. Under that is a hardwood and leather. Then a black bread up from the under-belly to mingle with molasses. Underbelly is kerosene poured into topsoil. My head hurts a little. Profile is -full and strength is a combative medium. Toasted cream darkly laces the festivities.


ACT II
I start the middle act of this Punisher by taking a toke in my Dollar Store hand-held mirror. Its guts/binder/wrapper burn notably even. The line has evened as well, but still there is a more than slight ribbon. Finish and mouth-feel are more pepper juice and it flirts with pulling in some kerosene. Cream goes more to dark chocolate and braces that note. Espresso thins more. Nuts are falling off... perhaps this Intensus has been married for some time. Top-leaf feels a bit less dry now. Smoke pace has quickened. Black bread is now pumpernickel. A dark tobacco rears, then rears again to the primary where it meets peppers. Chocolatey is now a high middling. Hardwood stays static and in doing so, becomes a greater focus as some shuffling happens around it. Molasses is trailing off, perhaps being absorbed into cream.

Kerosene is easing up, but the strength ain't, gentlepersons. It's a hard -full. Profile is at the same height. Body is mostly a heavy oil with butter accompaniment. Packing is as before, draw as well. Combustion chugs along nicely. Salt sets in on my lips. A cup of black coffee is poured into the mix. Remaining espresso note is now a separate bean. Ash clumps on my Chromebook and is skillfully whisked away by schmatta. Peppers soar, but are less delineated than prior. I sense a hint of sarsaparilla... then don't.


ACT III
Strength dials down to a medium+. Either that, or I have entered BEAST MODE, gentlepersons. Very tobacco and cream driven. Profile has become mainly lineal, consisting of, in zero particular order: chocolate, coffee, espresso bean, top-soil, peppers, cream, tobacco, hardwood. Very straight-forward stuffs. I have had many a more peppery stick than this Intensus -- and ones not rumored to the schmeared with the stuffs. Again and as ever, the pepper play seems more a feeling than note.

Ash is tighter rung'd still, and darker. Combustion/construction are each admirable. Kerosens flows as the profile hierarchy ebbs. Not an entirely pleasant finish, nor clean. Chocolate gets toward fudge now. I'm on the fence here, gentlepersons. Let's say I can see the allure here, but it's far from my wheelhouse. I am sitting on said fence, surrounded by thick grey-white smoke, wispy somewhat, but a lot nonetheless. Kerosene backs off after a couple purgings.

Almonds. I taste burnt almonds. They stay on the finish and sweeten there. As the band doth loom a half-inch away -- we are on a line. I don't see much changing here. If something does, I'll of course note it; if not, see ya in the next section.

NOTES
Altogether a somewhat beguiling affair. As stated, one outside a' my wheelhouse, but I did appreciate it.


EPILOGUE
In the time betwixt reviewing and editing, I visited the local Rose Gardens. Nice spot. I am itchy. Too, I got some new topsoil for my own roses. That is correct, gentlepersons, I am so well-off I purchased dirt. Did so with Ruby Vondella, my mini doxie in tow. I have not recently felt so upwardly mobile. 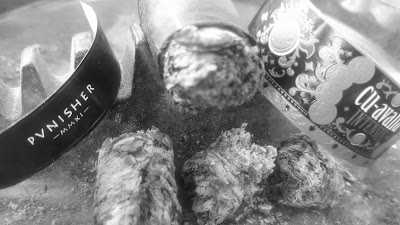