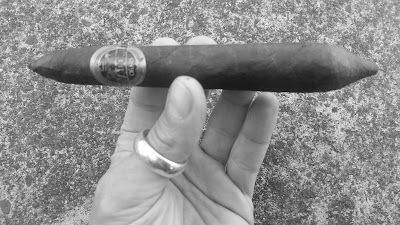 PROLOGUE
Fresh off the phone with an old friend. We talked about events of some 20 years ago. I don't want to talk now. Seems my spirit animal has always been a Dachshund.

PRE-LIGHT
It's a bowling pin. Fun. Coloring is dark. Espresso bean with a bit of far underneath dark chocolate. Smooth complexion. Some visual lumpiness and loose seams. Veins, but mainly of spider varietals. Cap is a tick sloppy. Nipple-foot is cut a bit uneven. Looks somewhat hurried, actually. Some glue from the band is on the surrounding top-leaf. Nice thick sheen over-top.

Hand-feel is a bit light in heft, but quite balanced given the format. Charmin squeeze shows a mainly even and medium density of packing. Texture is smooth and oily. Very rich chocolate schnoz along the shaft. Dark tobacco well underneath. Some cedar and leather betwixt.

I cut with a freebie cutter... has anyone seen my Xikar? A -tight draw tension surprises me. Very chocolatey to fudge. Some black bread and leather. Compost. Topsoil. I'm still surprised at the tension.


LIGHT
I don't toast the nipple. First hot aroma is leather, chocolate, and wood on an earthen under-belly. That's fairly the first hot pull, too. Swap the placement to chocolate, leather. Very straight-forward. Once lit, the draw tension dials down to a medium+, but I'm not getting a very full smoke-hole. Second hottie is retro-haled to a black pepper zetz and a black bread palate. Under-belly is topsoil; compost is drying up to meet it there. Primary is chocolate and leather on the third hot pull, and smoke is fleshing out well. Black bread is toasting in the middlings of wood and black pepper. The foot is really pouring off the white dense stuffs now.

Coming off the nipple to the bulbous part is a bit of slow burn-work. Mainly even, but some waver. Ash is white and forming a flaky sheath. Line is thin and evening out. Packing doesn't seem to have softened off the light. There's a slight mineral note that's short-lived on the immediate draw. It lingers in a sharp quick jab on the rich chocolate room-note. Lots of bread and earth there in the room, a well.

ACT I
The tension on draw is now all the way down to a medium as the burn-line wraps around the fatter part of the ring gauge. Lots of smoke from both ends. I was a bit worried about the loose seams at the onset of this Covadonga Figurado loosening further, but, if anything, they seem tighter now. Line is finding even more and more. Floral vibe and a slight graham note come in.

Still the primaries are a forefront chocolate that's becoming something of a brownie mix, backed by a nice simple leather. Middlings and under-belly are lock-step. Molasses is sidling up now to the bread. That bread, pumpernickel, is a tick more crusty on the retro. Line ribbons a bit, and is still not straight-even-stevens. Profile is a medium, lettuce say -- and strength has not moved the needle yet.

There's now both some crema and cream added in. Crema a bit bitter and cream somewhat toasted. Mouth-feel is erring toward dry, but not requiring of libation aid as yet. Generic wood note is sticking to the leather and while nice, isn't opening up very much or evolving. Burn pace has stepped up a good bit. Ash is a pale grey loose sheath and clings in its entirety to a razor thin line. Pumpernickle toasts more. Graham hides having never fully been seen.

Finish is fairly short and toasty forefront with a backdrop of cocoa sweetness. Mineral dalliances have fallen off the draw and room-note. Topsoil under-belly lifts up noticeably so throughout. I don't know why, but I dab at my nose with the "showin'" schmatta pulled from my suit jacket, and not my "blowin'" schmatta -- still folded in my back pocket. I've been sorta outta sorts today, gentlepersons.

Chocolate and leather each dial back to upper middling and at the end of the opening act, there's a vacancy up-top. Topsoil comes way up to just under this and meets the pumpernickel there. I roll all the accumulated ash off in my $0.99 Walmart tray and it's a good bit more thick in its core than is indicated by its exterior. I also even out the Cova's burn with a quickish re-touch. New ash is coming on very white and smooth. Profile unchanged, as is strength.


ACT II
Shaft oils up now and burn seems hotter and definitely paced quicker. Draw is the same. All pre-light looser seams have either tightened or been smoked through as we taper down. Crema is a bit more bitter now. Chocolate is a baker's thing. Black pepper smooths some. Burn won't even, but doesn't seem to need any further helpings. Flavor notes chug along. Wood, though charring some, seems to be becoming enveloped by the leather.

Now a new dark tobacco note comes to fill the vacancy atop the profile. Fairly earthy, somewhat sharply so. Smoke of the foot is a tick irritating to my kind yet mischievous green eyes. Strength is registering at say a -medium now. Body is getting more warm toasted cream and is up to a medium+ alongside flavors. Finish is lengthening off the tobacco, dark. There's a slight purple dried fruit therein. Palate is somewhat arid. Chocolate is now a burnt cookie, and re-entering the top-notes spectrum. Lower middlings show a roasted almond vibing and slight charcoal.

Burn needs some Djeep love. Smoke pours. Pours, I sez. Under-belly gets a sarsaparilla addition. All's quite toasty to charred. Charcoal is falling back to off. Draw sees a tick more tension, now. Notes are somewhat sharpened. Dark uncomplicated tobacco reins supreme and with an iron fistful of black earth. I'm sitting in a garsh-durned cloud. Band glue schmeared onto top-leaf heats and lets loose as the final act loometh nigh. Nigh, I sez. Re-touch. A nice-sized one.

At the band, it's predominantly a toasted topsoil affair, this Figurado. Some bite under tongue. On the retro-hale, there is still black pepper, but not in a gentlemanly manner. It does drop some trace of espresso bean and pumpernickel to palate, humsoever. Profile bounces back up to a somewhat outta whack -full. Throat catches.

NOTES
Now I know why I wanna get lost in the Midwest.
Cigar was OK. The wood was a hickory which never done happened.

EPILOGUE
My head is elsewhere today, gentlepersons. Thanks, as always, for the loaning of yer eyes and giving of yer time.