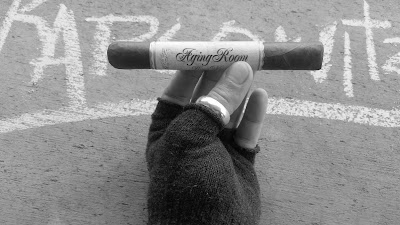 PROLOGUE
I need a haircut.

PRE-LIGHT
Lots of veins. Spider to fat ridges and all points betwixt. All running vertically. Seams are not tight nor even -- but solid and within the same realm of tension. Cap is solidly affixed. What I am getting here is a purposeful rough-hewn facade. Namely, I get a beaut of a visual tale. Shaft is a densely top-oiled dark mocha complexion. Lively red under-tones. Espresso marbling accents between complexion and sheen. That sheen -- quite healthy. Foot tobacco is a mainly auburn affair with great luster and one/two ticks of blonde. Packing eye-balls to a -full.

Hand-feel is zaftik. Lotsa heft and well balanced, at that. Oils transfer lively to hands. Smooth leather. I twirl it and it thunks my ring to a hollow tone. Now I gotta check if they all do that. Charmin squeeze is a Medium+ density all on down the shaft. Even and lively spring-back. Lively -- I keep using that word. Here's another: tobacco. Odd or silly to say. I get a big tobacco vibe off this tobacco product in comparison to other tobacco products. Yeah, silly. True, though.

That tobacco-sense is reinforced by schnozzing the shaft. Spiced tobacco. Leather in the background. Wood mixes into leather at the foot. Very straight-forward. Very good. I use my My Father freebie cutter courtesy of Cigars City and gentlepersons, the cap is thick with tobacco. Thick, but the pull resistance is a medium, dead-center. Cold notes are tobacco-led and light: cinnamon, nutmeg, hardwood, leather, and a sweet honey/vanilla vibe-barely-note that seems carried on a creamy note. Creamy note starts a great mouth-feel already. Note. I figured I needed to write note again. Note. A couple more cold tugs and the honey/vanilla flexes. 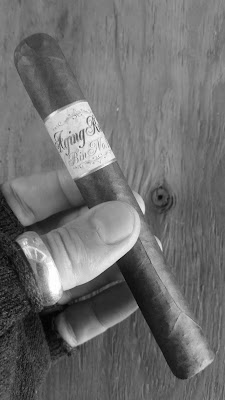 LIGHT
Toasting the foot gives off a white pepper and soft leather/rough suede aroma. Some woods are underneath. Laced within is a somewhat exotic white spice rack. First hot pull is aromatic tobacco with a bolstering and toasting hardwood. White exotic spices play underneath nutmeg/cinnamon. Under those spices are honey/vanilla swirls in creaminess. Second hottie is retro-haled to a red and white pepper addition. This hits my palate, fades quick, and a raw sugar note is left in its wake. Sugar note finds aromatic tobacco. Third hottie lays sugar on sugar. Vanilla/honey now strengthens. Woods remain generic. Suede falls with a purpose to the underneath. In short: tobacco-led sweetness with a bracing and balancing spice -- cleansed and delineated with peppers on a creamy canvas. Nice!

Ash is trying to sheath in a medium grey tone. Burn-line is a thin ribbon off an outdoors wooden match. Hot pulls have all had a medium+ tension. Room-note is aromatic and complex tobacco. Creamy honey is visible there. Out-put is a thick density medium amount. Mouth-feel is a soft tingle of perfect moisture. I'm smacking my lips, gentlepersons. This is Aging Room offering, thus far: mah-velous.

Profile is a robust medium. Strength is light.

ACT I
Vanilla and honey remain apart, but too together in a graham crack thing. Two bakers, one treat. Red pepper mutes a tick and is finer ground. White pepper gets a grain or two of salt and roasts lightly. A savory note comes in and suede backing goes leather and does so higher up. Very strong backing. Very high primary notes of sweet aromatic tobacco and now red spice rack. White rack has fallen away -- or amplified to said red... whichevs. Middling is more a' that spice, mixed with more cinnamon -- with honey/vanilla graham/creamy under-tones.

Packing did not budge off the light. Draw is perfect-o-mundo. A tick or two of top-leaf is slow to burn, but nada egregiously. Ash has darkened a tick and is some bit flaky. The room-note on this Aging Room would begrudgingly enchant a non-smoker, methinks. Honey and raw sugar cowboy up. Profile/strength? Same/same. Very purposeful delivery. Soft, but strong.

Those couple top-leaf ticks don't burn yet, so I roll off 3/4" of ash to re-touch. First one's free. Ash is a fine oil. Dense to the poking, then upon finagling, goes to a smooth talc. Cool to the fingers. I pull again and the burn-line is lit all-round. An apple note drifts in. The other spices greet it in a baked apple sense. Oils on the shaft glow in a heavy sheen. Pretty.

Smoke out-put ebbs a tick and a floral note is introduced on the back of a hazelnut. Graham cracker soars. Leather lifts even higher, as if proudly displaying what it holds. Very hearty notes. Bold? Well, sure -- but not brutal. Meaty savoriness pushes toward primary from the upper middling; in it is a new peppercorn vibe. As the second act approaches, that meaty thing gets a smoked addition and smoke-out-put ramps up to past its previous heights.

Medium+ body and a light+ strength. Burn is even on a -medium line. Construction/combustion hold solid. Ash is a pale grey sheath and the new stuff borders on silver. A seam loosens a hair along the burn. Aromatic tobacco drives. Really a beautiful take on a classic cigar via Jochi Blanco and Rafael Nodal. Some DR tang sets in as a citrus rind, keeping the savory aspect from making drool. Sheath loosens a bit. I sit the stick a rest in my $0.99 Walmart tray. A minute. Foot-smoke continues; draw is eager to fill smoke-hole. Burn wonks a good bit off the usually helpful rest.


ACT II
I start by rolling off a near inch of ash. Same density, etc. This stick does need some att'n as to its burn. Fillers seem to want to burn at a faster pacing than binder/wrapper. Tunneling isn't a threat per se, but lettuce say a looming potentiality. Draw is a bit less than eager at times, and requires an occasional nurturing. Not an ideal scenario, all things considered.

Red pepper flexes to brace well against sweetnesses. Ash flowers some, darkens, then lightens again re: complexion. Draw is not always even in smoke-hole fillin', but its tension is straight. Burn blisters but burns through sans re-touch. Smoke on the meat note becomes more prominent. Vanilla muscles up higher. Retro-hale singes nose hairs a bit, and my barber approves whole-heartily. Citrus rind is more. Graham is less, but plays an active role still. The aromatic tobacco dials back to let vanilla and peppers do their thing up-top now. A seam gets quite loose at the burn and a half inch down. Ash is nigh white to medium grey. Floral note deepens, heightens.

I just now, as the closing act doth approacheth, realize I've been smoking outside by a wide open living room window. My wife is gonna be pissedeth. Looks like I'll be emptying a bottle of Febreze later on. Draw tightens but remains a medium+ spectrum thing. This aids in smoke-hole delivery. Speaking of outside: I was promised warmer weather. I'm chilly in my hoodie. Drats to alls.

Profile forges ahead at a robust medium+, Strength is up to a kind medium. Packing holds like the little piggy's home built with brick. Room-note is lighter and sweeter. Enticing, verily. Black pepper, a zetz of the stuf, says "Hi, how are ya?" Let's say flavors go to -full. Body, a medium+ still -- on a toasted cream platform. Excellent mouth-feel with a slight warm tingle. Draw ends Act two in a bit of a hesitant manner. I retouch around the loose seam in preparation for --


ACT III
The packing softens noticebaly here. Meatiness gets chased away by black pepper. You know what don't pair well with any offering? My idiot neighbors yapping about politics while right-wing talk radio blares in their background. Ash clumps and is whisked off my QWERTY with a practiced schmatta. Smoke remains cool. Flavors unchanged. I take that back, as the next two puffs are even greater black pepper-led. Some subtleties are not lost, but postponed until it clears. I take that back, as well... fare-thee-well, apple.

The hollow thunk against my thumb ring on this affair's onset. I keep thinking of that, and this Aging Room's burn. I also think Aging Room sounds like the nursing home spot immediately surrounding the TV area. I also think that the Aging Room font is Picmonkey-familiar. I think a lot of thinks. It's why I quit school. Loose seam separates in fugly fashion. 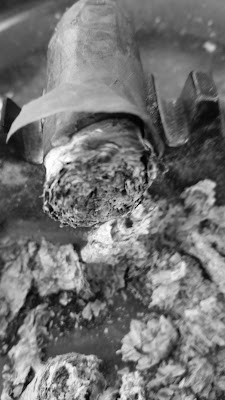 Pepper and vanilla (which absorbs sugar note) lead at the end. Creams goes quickly to toasted and then to nigh scorched, hardened. Remainder of sweet notes all but dropped off. Boldly spiced, not harsh, and still cool in the smoke-hole. Finish did bitter a hair's breath and complexity was unfortunately nil. At the band and to the toothpick -- I failed at getting a decent pull.

NOTES
Re-touch, I done that more than I like. Bearing in mind I always smoke outdoors, and bearing further in mind, there was no tornado today. Uneven draw out-put, loosened seams, and sub par combustion; oy vey. A lot of interesting and robust flavor notes along the way, saved this stick and in those aspects placed it atop many an offering. Jekyll and Hyde, somewhat.


PAIRINGS
Manischewitz Loganberry if you can find it. Surprisingly -- not coffee -- I'd go tea. Atmospheric pairings? Indoors, kids' gloves.


EPILOGUE
Yesterday, I fed my roses a bucket of spent coffee grounds and cigar ash. After this review and prior to editing, I pruned and watered. Time marches on. Might as well be pretty in doing so. Take myself, for instance, gentlepersons.