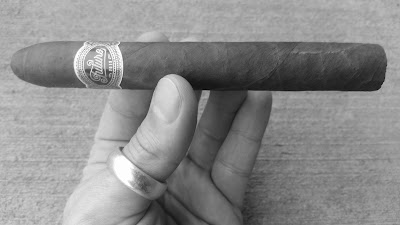 PROLOGUE
Arm & Hammer has apparently stopped making its Truly Radiant toothpaste. I picked up a tube of something else and now my front teeth are numb. My community center has stopped offering free newspapers. How the heck am I not going to be able to complete crossword puzzles, gentlepersons? My wife's dog barfed on the area rug I cleaned yesterday. These new braided shoelaces don't hold knots. I still don't have a Moped. I thought the rear tire of my '56 Schwinn was holding air -- I thought.

It has not been an utterly stellar stretch.

Oh, and the time change has me asleep before Golden Girls re-runs.

PRE-LIGHT
Very rich and somewhat uneven milk chocolate hued complexion. Gotta say, love the band. It's as if a retro-futurism designer paid homage to Nat Sherman. Classic. Simple. Quirky...but this ain't about me. It's about this Futuro offering. There's a burnt sienna and quite vibrant under-tone. Nice sheen over-top. Minimal veins. Some spiders -- lots of horizontally so. Cap is a bit pointed in a dulled Belicosa thing and sturdily affixed. At the foot is an even mix of auburn and brunette tobacco. Packing looks there to be a medium+ density. Between foot and cap, there are a couple lumps felt through the top-leaf.

That brings us to the hand-feel. Dry oils. Smooth and toofless. No impediments via veinage. Superb balance, and for a 52RG, fits nicely betwixt pointy and bad-finger. Charmin squeeze test shows a medium+ echoing of the foot eye-balling. There are a couple of soft-spots in the 2/3.

Schnozolla-wise I sniff at the shaft and get a creamy and mildly spiced hay. At the foot, a zetz of chocolate is added. A heightening of spices to include red vibes, as well -- still softly delivered. I Xikar the hell outta the cap and the cold draw is a brilliantly smooth medium resistance. The thing fits great in ye oldde smoke-hole, too. Flavors are nicely toasted nods to spices, cream, and chocolate; delivered on toasted clouds of cream. Leaves a nice bittersweet note on my lips and tongue.


LIGHT
9:10pm
Toasting the foot gives off a leathery and darkly roasted nut aroma. Some seasoned woods. Very much sharper than the cigar has acted thus far. Also, very enjoyable. First hot pull finds the draw resistance up-tick to a medium+. Right in my wheelhouse, thanksya. Notes are quite subtly delivered inside the cream. Spices and pepper are white. Cedar is charred nicely. A chocolate that rich and milky and softly delivered. Mouth-feel is soft, as well, but too there's a tingle which cleanses. Second hottie is retro-haled to red pepper (kindly) and a sharp darkening of the chocolate. Falls to my palate in a very crisp cedar that meets the creamy mouth-feel. Some roasted nut vibes play in and out. A coffee bean, too -- roasted to full city. Third hot pull is simpatico and smoke becomes billowy.

Room-note is aromatic tobacco with creamy chocolate leanings. Very pleasant. Burn is evening out post-light but is still a tad ribbon'd. Its at a thin+ thickness. Ash is mainly white with some ticks up to a medium grey. Its piling on in a loose sheath which seems headed to thick ladder-rungs. Draw stays even. Profile is a medium+ fresh outta the gate and strength ain't yet a thing. I type all that schlock and look at the thing again -- dead even burn on a razor. Zero softening of pack on the light. Impressive.

ACT I
Very toasty. Very creamy. Very subtle and perfectly balanced notes within those confines. Primary notes are creamy milk chocolate and a sauteed in butter white and red pepper mix. Middling is all cedar which pulls from cream and spices up-top. Underneath and backing is a velvety sweet hay. Sweetness there is a floral honey note. I think I'm in love.

Ash fills out a bit and is near an inch of almost complete whiteness. My lone complaint is that my tuchus falls asleep when I write these reviews. OK, I have a cigarcentric one, as well -- this Warped stick ticked up in draw resistance again. We're still at a medium+, but a notch tighter than my liking. I don't feel at all robbed of smoke, however. So smooth. So velvet. So ah.

I roll off an inch of dense butter smooth ash. A retro-hale gives a zetz of cleansing red pepper which isn't warm enough to singe nose-hairs one bit. Just warm enough to do its duty. Chocolate is thickening if not heightening. Cedar is flexing. Strength is felt to be a -medium. Nic comes in smooth as any other of these Billy Dee Williams-esque introductions. Burn does re-ribbon a bit, not nearly egregiously so.


ACT II
The hay and floral honey backing is muscular in a very humble and non-flexing-in-the-mirror manner. The cedar middling gets a graham cracker addition and some ginger vibe, too. It's rare to find such nuance in such a creamy stick as this Futuro. Top note of chocolate has a couple of faces, as well. There is milkiness and a more bracing darker aspect. The darker note borders on waxy and while not inherently pleasant -- plays a role in not allowing a sickening accumulation of the milkiness. Salted butter plays on my lips.

The room-note is a definite selling point. I'd call my wife out to smell it, it's so good. But then my wife would be out here. So I don't. Strength ups to a medium as the mid-point looms. Profile stay at a medium+ but high within that realm. Burn isn't a razor, but I ain't even thinking touch-up. Ash is unchanged. Packing is a half-tick softer about 3/4" post-burn.

Bread darkens a bit at the half. Coffee beans come in. Also a definite roasted meaty savoriness. Profile darkens and steers further from desert. Cream thins some. Ligero show. Tres Nica, gentlepersons. Big time transition here. Mouth dries a bit. finish goes from sweet to charred tobacco. I purge because that's what I do. I think I invented it. Around '98 I believe. Honey darkens to a molasses bu retains floral notes. Graham ain't detected. The finish is becoming more and more complex.

Ash holds firmly, belying its aerated looks. Packing firms up. Line is still a ribbon, not needing att'n. Smoke output falls back when the savory notes kick in. Still plenny to the smoke-hole. Draw resistance moves down in the medium+ realm. Palate is a bit dry by the back. Hay backing has another nuance, epis! This one a hint of alfalfa, The shaft pick up more oiliness both visually and hand-wise. Pace slows a bunch. Retro-hale sharpens and its notes thin apart a bit. Cedar dries on the draw.


ACT III
Final act starts in a worrisome way. Tunnel threat. Biting of flavors. I retouch the light. Purge. Sit. It's been having a hard time coming out of its showy transition. I hear it crackle from my $0.99 Walmart tray. I'm parched and swish some agua. I'm thinking of moving to seltzer.

Crisis averted; and deftly so if I do say so myself. I roll off a half inch of loose ash to expose the burn -- looks good, gentlepersons. Smoke pours white and voluptuous. Cedar regains creaminess, though not as fully as prior. Smoked not charred meat is on the retro. Ligero has ebbed. There's a twist of 'range. Spices mute and cream soars now. Backing is unchanged and sans scary temporary bite is shining. Mouth-feel is even more velvety now than in the opening act. Desert stick.

Lemme get this right. In the second act, the chef burnt dinner. In this closing act, the night is saved by a heroic pastry chef? Get 'em, Frenchie! Bread goes yeasty and sweet. Coffee cake. Orange is the cleanser, as spices have split the scene. If you over-smoke, I feel the bit might return. Easy, gentlepersons, easy. No matter how creamy; sharp is a looming thing. Orange hits its crescendo and becomes then a lemon oil. Chocolate holds the primary realm all on its lonesome, but ably so. Coffee comes in and up. Loaded with cream and sugar. Eventful, this Warped offering.

As the band approaches, chocolate falls to season the cedar middling. No primary. Nub borders on spongy. Profile is a slight medium+ and strength a spot-on medium. At the band, coffee leads from the front. Smoke stays coolish. My palate is a tick roughed. Burn is a slight ribbon. The night is dark. I am sexy and talented. An occasional crackling is audible on the pulling. Retro-hale stays interestingly meaty. Cats say meow. Dogs go woof. It's all right there.

Into the band, it thins and dies. Retouch.

NOTES
It's like a slow roller-coaster. A Sunday drive in a spaceship -- through an asteroid belt.


There was a little girl,
Who had a little curl,
Right in the middle of her forehead.
When she was good,
She was very good indeed,
But when she was bad she was horrid.
- Longfellow


EPILOGUE
10:55pm
There is a plus side o' my stretch, humsoever. Stay tuned!