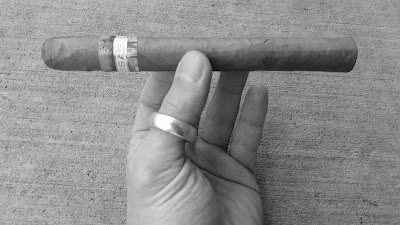 My rose garden has vooshed to life with the current slightly springish weather and very NW rains. Time marches on and on and, yes, on. It's nice to be anchored, even if in illusion, in the comfort of the traditional during the ever-fluxxing flux. I think I'll find that classical tradition in --

PRE-LIGHT
Big. I am on the record as stating 50RG Churchills are the Devil. This illusion would be a lot easier to uphold if I had a 48RG in my mitt and smoke-hole. Complexion of the Devil is CT with an oomph notched up a shade darker. Let's call it coffee with cream. Some emerald green spots can be spotted. Under-hue is up-high and is a it of vibrant caramel. Over-top is a nice sheen, evenly distributed.  Seams are looser in some places than others. Veins are minimal, spiders more so minimal. There is some issue with under the top-leaf occurrences. In two spots (2/3 & 3/3) you can see what looks like a twig imprinted through the binder/wrapper and this impression too discolors the stick (one nearly pokes through at the onset of 2/3). There are also some doses of lumpiness here and there. Cap is very nicely and tightly affixed. Foot tobacco peeks out as mainly auburn with a couple tufts of lighter auburn high-lights. Medium+ and evenly so density to ye oldde eyeballing. There's a slight footing to the flute.

Hand-feel is a bit of thin oil and nearly glove smooth lest the lumpy impediments previously made mention of. Balance is actually quite nice for the size of this Isabela. Charmin squeeze test yields a medium to medium+ packing result -- dependant upon where ya pinch. There's mainly a lively spring-back, but at the mid-point, there's a tick of sponge. Feels quite nice in the hand, really.

Schnozzola notes are a nearly delicate tobacco with a slight nuttiness and thin cream. A salted butter vibe. At the foot, there are some mild pale kitchen spices and perhaps a dash of white pepper.

I clip the cap with my freebie My Father cutter. Medium+ draw resistance. The sugar glued cap is foremost on the flavor, yielding to a macadamia and/or cashew creaminess. Some light spices. Some fresh cut green grass lies underneath. I dunno. Maybe it lays.

LIGHT
8:10am
Aroma off toasting the foot is mainly those pale fleshed nuts, roasting. Too, there is a curiously stiff vanilla note. It's backed and braced by something I can't detect. Perhaps a soft wood. Lots of vanilla in the first hot pull, from draw to finish. A light hay tobacco is underneath. In the middle there is a cashew, macadamia, pine nut melange. The sugar-glued tip taste is less prominent than it was on its Corona cousin. Second hottie is retro-haled to a zetz of white pepper and that bracing wood -- seasoned pine. Almonds come in and take to the primary. Vanilla goes to the paler nut middling. Tobacco underneath gets a bit ballsier. Spice rack tries to catch the Almonds up top, but they lag in the primary. They're not spicy, they're warm. Third hot pull is Almonds and spice rack, digging in. It's an odd pair of primary notes, as there is a good deal of space betwixt 'em. Clove is leading the spices. Nutmeg is coming on, as they get a bit more toward red. Still calm.

Ash is 80/20 salt/pepper and stacking on in wide ladder-rungs. Burn is imperfect but even enough to be considered even. Line is -thin. Pack softens about 3/4" post line. Draw is a medium+ and a half tick spongy. Smoke out-put is medium. Room-note is nutty and creamy-sweet. That cream lives mainly as a note on the medium+ legged finish and makes a great soft mouth-feel. Perfect moisture level there.

Strength ain't said heya yet, but I've been placed on notice that it tends to sneak up on ya. Profile is a classic medium.

ACT I
A new toasted white bread note drifts into the upper middling. Almonds are very much the star up-top, where they remain raw and spiced from behind. Middling is cashew and macadamia -- a tad reminiscent of a Nat Sherman nut mix. Pine nuts have tapered off. Vanilla has sunk lower into the middle, but still plays a large role in bringing sweetness and almost another dimension of its own. Very wide landscape of flavor notes. The cream begins to attach to vanilla. Underneath is still the mild/wild tobacco note with a growing earthiness/dirt. I think there's a ton of squirrelly restraint being shown down there. A biker on parole.

Cream gets a bit of blonde coffee poured into it and along with the vanilla, it's quite a complex thing. A seasoned pine still backs the vanilla. All the action is in the middling here. Low in the middling, at that. Very subtle. A rumbling. While up-top, there's a nice raw almond with an occasional stretching up of the paler, roasted nuts. A new, warmer spice hits the underneath, balanced and cushioned by an also new damp hay.

Burn is razor-sharp. Pack has ceased softening. Draw is unchanged, well, less spongy...resistance is still a medium+. Ash dumps on my keyboard just shy of an inch. Dense dry cool powder. Room-note gets a touch of white pepper and the warmer underneath spiciness. Out-put is a medium+. Very nice. The sugar note from the tip is Gonesville, Daddy-O.

We've hit our stride, gentlepersons. Lock-step fashion. Well-trained notes. Classic medium all-'round. Very classical cigar offering, this Isabela. Me likey. It never tries too hard. Almonds get a bit of sweetness as cream extends to the top, and now laces the whole profile. Burn ribbons a bit, but ain't in need of a re-touch. Great burn-rate. Just a pleasant smoker with more than enough complexity to stave off tedium. Perfect for a slow morning... or for making a morning slow.

ACT II
Burn evens out on its lonesome. A floral-vibed oak note plays into the mix now. Oak teases at the primary, floral attachment ebbs and flows. Rest of the notes are as previously stated, well-trained. Ash grows a tick more flake than before. Seams loosen minimally in spots. Strength heightens then falls repeatedly. Kinda in a teasing manner. Cream and oak toast and roast. Almonds stay raw and strong up-top. A green grass note from the way-back comes more prominently underneath and it's a bit, well, green. Sharply so.

I roll off an inch or so of ash in my 99 cent Walmart tray. Same dryish density as prior. I'm starting to feel like I'm on a Sunday drive -- in a muscle car. Sharp notes from the grass have ceased after a purging or two. Love the pace of this thing. No rush whatsoever. Too, no boredom. My stogie sense is tingling, gentlepersons. I feed the cats, curse the raccoon who keeps messing with the cat food stash. White pepper, nutmeg, and a graham cracker mingle in. Some clove, too. Underneath gets a load of dirt delivered.

I had a load of dirt delivered last spring, to my yard. You know you've made it when you buy dirt. Strength is up again. Never menacing, just teasingly. It has a twinkle in its eye. I appreciate that. Construction and combustion are fantastic. Profile pushes kindly into medium+. A slight lemon zest zetz at the end of the now longer finish, cleans my palate well. Mouth-feel is very nice. Cream cut with cool spices and rind -- perfect moisture.

Nuts in the middle have become a solo cashew, roasted deeper in a sugary note. Pine wood has fallen off, but the oak stays firm. Blonde coffee soars. Vanilla too. A nice transition of trimming the fat and highlighting the important stuffs. Almond is fantastically unaltered and even further delineated. Spices delineate throughout, as well and also meet up, joining aspects of the underneath to the middling. Cloves, ginger, nutmeg, white pepper, salt -- in that particular order. The floral becomes fruity and when it flows into the oak on occasion, a nice wine cask can be spotted. Vanilla and cream marry and toast warmly.

A nice chew sets in. I clean my desk. Restock a shot glass with toothpicks. Whisk broom away some ash. A minute worth o' work. Stick goes out. I'm a little heart-broken as I relight. Pack softens at the burn-line off that relight. Line stays at a razor. Toasted bread stands under the spotlight now.

The spotlight actually takes a turn on each crew member/note of the now ensemble cast. It ends on the toast and when it doth, the toast is buttered. As the final act looms nigh, profile is set to medium+ still, with a medium strength which teases with an occasional friggin' club. I'm on my toes, gentlepersons. If we were dancing, I'd be on your toes. Giggling.

ACT III
Tobacco becomes the core center with the notes huddled more closely around it. Sweetened salted butter is on my lips. Smoke stays cool and draw, even. This Isabella was always a smooth customer, but is all the smoother now. Mellow. A warm handshake which sometimes employs a gotcha novelty hand-buzzer via a zetz of nicotine. Never threatening, always somewhat jovial. My desk is looking great, thank ya. There's a greater sweetness, seemingly inherent in the tobacco now. Citrus rind/zest whatever I said, soars on a retro-hale then takes its leave. Graham and cashews heighten in a tandem tick. All alterations are quite subtle now.

Almonds, toast, graham, cashews. Vanilla laced tobacco core with sweet dirt. Spice rack, back to the first act's mild paleness drives from behind that core. White pepper retro-hale with some new yeasty hay.Very much another transition. I can make a case for three thems. Very cool. All subtly done did with the same menu. Well-played. Sugar note gets a tad caramelized

All notes toward construction hold quick and firm all the way to the band. First ballot Hall of Famer, this stogie. Stick me on a bench with this and a newspaper crossword puzzle, and I'd be one happy fella. Strength don't tease no mo' in through the 3/3's majority.

NOTES
I smoked through and missed two hours of my daily Golden Girls fix. Don't much care. That's a great endorsement of this Isabela stick.

PAIRINGS
Medium roasted coffee with cream and sugar. A park bench and a crossword puzzle. Pip or few of Hershey's. Sounds odd, but grab an orange, maybe.

EPILOGUE
10:10am
A fine and early start to the day. Now I got some miserably mundane catching up to do with the rest of it.

Here's something: make sure ya tune into the next Radio Herf. It's March Madness a contest is being set up by Cigars City as I type. There's a box of __________ at stake!