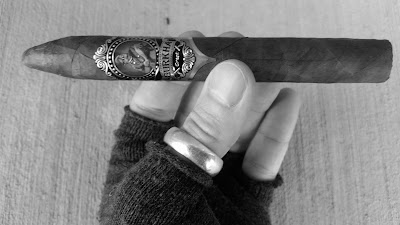 PRE-LIGHT
Orange-tinted-caramel to espresso roasted bean uneven complexion and a few ticks along the way in-between. Seams go from tight to near-tight. There are veins, a broad one in the 1/3 with no ridge to it is the most, yet not very, egregious of the teeny lot. Lots of spider webs. The look of it is a torched piece of wood. There is some excess glue on the cap, but it is well-formed into a Torpedo format. Foot tobacco peeks out at a dirty blonde, auburn, and brunette even mix. Medium Density to the eye-balling. nice luster of a sheen over-top it all, and evenly so.

Hand-feel is smooth and perhaps a tick more dry that expected. No impediments to the feel, but not so smooth as to be slick. Balance is nice. For a 52RG, it feels a tick fat twixt my fingers. Charmin squeeze testing results in a medium packing, lest in the end of 2/3 where it dips to a spongy soft+. Interesting.

At to schnoz notes: along the shaft is mainly a toasted tobacco warmth. Some oak. Some leather behind that. Dusty spice rack added at the foot. I Xikar Xi2 the heck off the cap with a cold steel icy proficiency. Surgical and sterile. More metal than man... Medium resistance on the draw. Cold pull is that sniffed at toasted tobacco note. Very clean alive oak, definitely not seasoned. Some trace red spice rack far behind. I get perhaps a dried yellow fruit as I keep cold pulling. Imma stop cold pulling so I can --


LIGHT
1:15pm
Toasted aromatic tobacco and paper -- equal parts, on toasting the foot. First hot pull is foremost a thick, chewy mouth-feel. Flavor-note-wise, there is much deep roasting of quite subtle flavors. A smoothly delivered oak which is suddenly seasoned but braced against harshness/sharpness by that soft mouth. Ya also gots a nice work leather happening. Second pull high-lights the spice rack on a retro-hale. Nice baker's spice mix. Some red pepper sprinkling that tingles the tongue. Plays nice against the chewy finish. Third hottie is a reinforcement of the first two. A nice sweetness is approaching the toasted note/note additive.

Packing softens a tick at the burn.Ash is a white flaky sheath. Burn is a ribbon, its line a medium+ thickness -- I assume we shall settle down and in. Draw is up to a medium+ resistance. Smoke out-put is thick and high; like my High School girlfriend. Room-note is the toasted sweetness of an aromatic tobacco filled earthiness. Some generic wood notes are there, as well.

Looks like we're off the the races... or the theatre...

ACT I
Instead of finding even, line finds a blister. I correct in a re-touch -- no points deducted -- I lit outside via wooden matches. I re-touch via Djeep. It's not exactly readily accepted. There's a rind o' orange and the spice rack has become cinnamon-led, so lettuce go with mulling spice. Toast eases up and stays, but too lets light through. Leather is a high-up backing. Actually, this Gurkha sees its flavor notes not structured in the usual Gurkha manner. The backing note is note simultaneously the top-note here.

Also, we're a bit less chewy now. I'd say the profile is a robust medium; strength not yet to register. Burn is trying to even now but is still a tick or two wavy. Ash is quite flaky but solid and 80/20 salt/pepper. Packing has re-firmed after the post-light softening. Draw remains even, smooth, cool. Very smoky. Very smooth.

Mulling spice is a primary, as is a sorta confusing oak which is at once seasoned and toasted, and still a vibe o' alive. Leather backing is lowered a bit now. A retro-hale is very important, as that's where the majority of the mulling spice is found -- or at least its balls. Mouth-feel is tingly soft; less thick and chewy, but still that. Just in a sunnier delivery than other offerings might, well, deliver. Middling is all toasted aromatic tobacco earthiness. Occasionally some spice falls from over-top to liven it a notch.

There's a thin honey note now, from middling to and through finish. An orange blossom sort. Finish is -long with that, mulling spice note, and on a buttery mouth. Some salty butter hits my lips. Aromatic tobacco is picking up more heft. I'd say the profile is a medium+. Body = M+, flavors = M. But since the body plays a more prominent role, we'll go where we went, gentlepersons. Strength? Nah. Not yet.

At the end of the opening act, mulling spice drops to middling with the earth/tobacco. What's up-top? Nothing. The middling roasts deeper. Oak is at the bottom of all that -- now fully seasoned and lightly charred. There is an occasional moist red to purple fruit lying over-top of the backing leather. A tobacco core, then -- rolling around on a thickening work leather. I shall call it "Saddle."


ACT II
A bit of top-leaf loosens along a seam. Burn is a wavy conglomeration of ribbons. Another blister emerges. The fruitiness stays now...plum. Draw stays even. Retro-hale displays a hint of finely ground cayenne. Is there no top-note or no middling? I'll leave that one for the philosophers in their ivory towers of academia. It's a tobacco/earth core. The aforementioned rolling of such on a now plum-drenched saddle leather. Why must Gurkhas be so hard to write about?

Mouth-feel is sweeter now with the constant plum. Chewy. I hesitate, though, to say creamy. Full, but not as a system of measure. I re-touch the light. We have yet to reach the loose tick of top-leaf, but it grows. Charring note grows, too. A crackle is heard on the occasional pull. Flavors sharpen a tick, thin a half-tick. More loosening of seam...burn-line lags alongside. Chewy mouth-feel is somewhat inconsistent. Flavor scope is narrowing. I purge. Some help, but not a lot. Smoke out-put is berserk, I tells ya.

Plum saddle gets pulled up into the shrinking tobacco core. Notes are all aboard still, but crammed into place and I begin to worry about their continued delineation. I roll off the ash to address the fercockt burn -- ash is far less dense and far more powdery, but cool to the fingering. We've still not caught up with the loose seam, because now it loosens 3/4" ahead of the burn. That soft bit at the 2/3, the one I mentioned in pre-light, it's now evened out. So I got that going for me. I gather my aplumb and dab flop-sweat from my brow with a schmatta.

Orange rind from the mulling spice soars a bit now, within that core. It leaves the mouth-feel a bit sharper than prior, too a bit more dry. Strength is nowhere to be seen, and as this is a triple Ligero, I am surprised. I do get all that nice roasting, though. All other notes are far more subtle. The cayenne stays on a retro-hale, and makes a nice addition. Finish is now long and mainly roasted sweetnesses. Chewy is in and out. When out, we are quite sharp in its absence. Kinda helter-skelter. Ash browns. Pack loosens again in that original spot.

A dry cocoa is attempted throughout this act, but never fully gets beyond a minimal vibe.


ACT III
Strength registers to a light+. A hickory vibe sidles up to the oak in a nice complexity. The packing, though, is loosened throughout now; quite spongy. Burn won't un-wonk. I roll off the same ash and expose a lot of aeration at the burn. Chewy has been gone a bit, sharp charring takes hold on the mouth. Palate is tingling from the cayenne which is on the draw and retro. Wrapper comes loose at the cap. Oy, vey. Oy, Gurkha.

Flavors gather tighter in the shrinking core. At the end of the draw, there's a damply perfumed floral note. Delineation, to its credit, holds. Smoke-out put is a somewhat fatigued Bereserker, but beserk nonetheless. Too, it's a tick brown-hued. Sweetness is almost equally sour. There's somewhat of a coffee bean note. I believe I am grimacing gentlepersons. Draw resistance is loosened to a medium. Delivery to smoke-hole becomes a bit squirrely.

I stop the review at the band. Well...half of the burn is at the band. Other half is most of an inch away. Into the band, I pull a mouthful of ash.


PAIRINGS
Dr. Pepper. Tell ya what, since ya spent so much on the stick -- get a knock-off store brand.