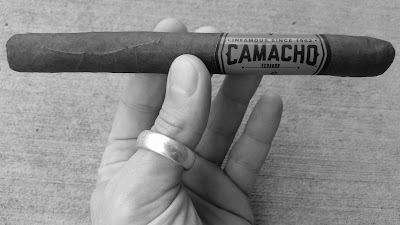 PROLOGUE
I can't believe he puked in the spaghetti pot. No one has ever done that before, and its been offered for many years and to three childrens. I mean, it's an option, yes -- but so are apple slices at McDonald's. I am in envious awe of my little libertine. Nevertheless, he's back at school today, so let's address --

PRE-LIGHT
Feels a tick on the light side. Dark brow, espresso hued top-leaf with an even complexion. Some lighter notes coming up from under. Not much by way of sheen over-top. A couple of noticeable veins in the second half, but they offer no burn scare or hand-feel impediment. Seams aren't tight, per se, but even and solid. A couple spider webs run horizontal across the shaft. Triple cap is well-affixed and foot tobacco appears packed to a medium density and is a couple shades of autumn.

Hand-feel is not slick, but far from dry. Balance is quite nice. Suede feel. Charmin Squeeze test results in a medium density that is bordering on spongy, but offers a livelier than expected spring-back. Schnozzola sez: Mocha laden heavy notes of tobacco with an under-lying sweetness. That's the shaft. At the foot: Graham.

I nibble off the cap to a medium+ resistance cold pull with graham sweetness pushing mocha primary. Some spice rack on the cold finish. Funny, I keep getting graham cookies -- not graham crackers. Yeastiness, perhaps.


LIGHT
10:15am
Roasted nuts, leather vibe, sweet spice rack, cocoa... all on toasting the foot and the aroma thereof. Chocolate soars on the first hot pull. It takes most of the coffee with it from its mocha, but not all. There's another source of sweet, too. Can't nail it yet. Cake mouth-feel. Tobacco is very inherently rich/sweet but not dark. Graham plays around there. Second hottie is retro-haled to a ticking up of spice rack. Nutmeg, paprika. Some white pepper, finely ground and scarce. Third hot one is much like #2 and we are apparently off to the races, gentlepersons.

Draw is static at medium+. Packing softens about an inch ahead of burn. Ash is 50/50 salt/pepper on a wavy medium+ thickness line. It's clinging in ladder-rung; tight and evenly so. Smoke out-put is -full and white creamy clouds. Room-note is a bit bakery, a good bit coffee house, and a good bit rather aromatic tobacco.

ACT I
Chocolate sees the coffee note pull near even, but they are no longer connected. See ya, Mocha. A cream sets in nicely throughout and into the mouth-feel. It's toasted, but lightly. Very rich. Graham-led tobacco carries the notes along. Chocolate borders on fudge -- a thick pip of milk chocolate. Again, yeasty. Very much like a dark cake. Retro-haling adds a nice somewhat musky toastiness. Spice rack weaves in and out, laces. Screw coffee -- we've gone full espresso. Profile is a zaftik medium+. Strength is a light+. That profile is a bit ham-fisted, but well-meaning. Not very nuanced but quite decadent. Not murky, but not not.

Draw holds. An inch of ash doth, too. Burn is a tick off, but not in re-touch territory. Ash is a bit flaky and light. Burn-line has settled to thin+. Smooth delivery, smooth notes. Room-note sweetens. Very nice contemplative smoker, this Camacho -- but not quite enough to contemplate on in and of itself.

A softly charred cedar note comes in easily. Rich chocolate fudge and espresso are primary notes. That cedar goes to the middling with the spice rack. under that and carrying well, is a graham and tobacco. The tobacco is exceptional. A certain savoriness is joining in the sweetness there. Both subtly inherent. Perhaps not whispering, but speaking clearly -- many of the other notes are kinda boisterous, but I wouldn't say yelling; or I would have. Not a "flavor bomb," but flavorful, yes.

There's a slight syrupy floral note at the end of the long legged finish. Graham is there, too. Very creamy and somewhat buttery. There's an increased musk on the retro-hale that seems to seek out the Espresso. There's a caramelized sugar note in the espresso. Sweet salted butter is on my lips. Ash clumps near my schmatta at an inch+ and it's structured but loosely. Goes to a cool talc readily. I take a puff and nothing.

It went from 60 - 0mph in a nano-second. I "Wow." But it is not the wow which differentiates A from A+. Re-light. The burn had just found even on its lonesome. Re-light takes greedily quick and we shall see, gentlepersons. More musk, more toasted addition to same notes as prior. A vibe of charcoal, perhaps.

I get the sense someone assembled S'mores and held them too close to the burning cedar. Smoke out-put rises to full-on full. Ash is a bit more peppered. Espresso over-takes chocolate fudge. Strength is a near abrupt medium. Profile is an uncomplicated medium+ boundary-pusher. I said S'more and yes, there is a marshmallow note on behalf of the cream (mouth)/sugar (note). The sugar is caramelized, so the marshmallows, toasted.

Pack continues to soften ahead of burn. All other construction holds. Chocolate pulls back in-front of the espresso. It's a race!!! Is this Camacho a racist? Not at all. I'd Trump that thought with a definitive no. In fact, no is a great follow up to all things Trump. OK, that was all a stretch.

Burn-line ribbons, but heck -- at least it's burning. Graham stuff ups to the middling, but still influences the under-neath tobacco.


ACT II
The ash lilts to the side at about 3/4" and I roll it off. Density at the burn seems rather airy and loosely packed. Seams loosen a tick. Draw stays surprising right and evenly so. Flavors are fairly well-entrenched. The jockeying of the primary chocolate fudge and espresso staves off boredom, but there ain't much nuance anywheres. Complexity? Bupkis. Other than the backing, at least -- but that's more definitely nuance and only barely complexity. The chocolate/fudge tries, but fudge never truly stands alone from it and remains but a characteristic. Mouth-feel is nicely soft and its moisture level is a tick high, but not drooly. A darkly rich desert, but not overly sweet. That said, some greater balance would be nice. Spice rack is unchanged but laces a bit looser.

Speaking of looser: Seams. Packing has ceased loosening, however and that's cool beans. Medium+ profile. Medium strength. Smokiness finds musk and chars a bit. Nicely so. Aromatic tobacco backing heightens. Very wonderful room-note. Some cloves join the retro-hale with some greater white pepper. Burn is a messy thing which is a hair away from a re-touch. This is a tricky Churchill, this Ecuador -- it needs smoked, lest it go out quickly (it almost did again.) Too, it seems prone to being over-smoked, as it is a Churchill.

And I type that, and it went out. Almost. I pull in short puffs and it's back. Charred more. Re-touch. Draw is now quite un-even insofar as out-put. If a cigar is going to require such focus, some complexities or at least nuances, would be well welcomed. Leather comes into the now oily under-neath. The new ash is almost strangely shiny white. That portion is a different consistency, entirely. Very dense. Flavors are vastly unchanged. That said, there is less dimension and delineation. Charring grows throughout. Charcoal comes on stronger and stays in the mouth and on the finish, drying the palate.

Pack loosens throughout once again. Burn requires the supervision level of a rambunctious pup -- the dumb one of the litter. I re-touch, as some top-leaf lags. Strength subdues a bit.


ACT III
Lotsa purging and all-round vigilance is rewarded with a return to Act I. Less charred notes, no further charcoal annoyances. But was that opening act so grand? Flavorful, for certain. Heavy body, quite yeasty. Maybe a dense chocolate cake now. Combustion and construction woes continue to abound. The draw stays unimpeded, however. Almost oddly so. We had David Blanco on Radio Herf recently; he stated from a manufacturers perspective that "Would you buy again?" is the paramount query. I would, I think. For the flavors. Or at least, I'd smoke again. Perhaps that's surprising, but the flavors are nice. Camacho (with Davidoff at its helm) has taken a severe step down in QC, though. And it's as obvious as a fat heavyweight pugilist telegraphing a hay-maker.

Other than overt QC issues, there lacks a cleanliness here, as tastes build layer upon layer and oy -- as stated before -- a cleansing spice, or a citrus (I ask too much) would be nice. OK. I'd smoke again -- on someone else's dime. What's that really say, though? Feh!

NOTES
I feel as though this Camacho offering is a lot like watching that aforementioned heavyweight prizefighter enter a bout sans having trained. He hits hard, but rarely hard enough and every punch both missed and landed, winds him. He moves in a lackluster fashion.

Flavors are again nice (to say the least) and heavy-handed, but there's no movement...no subtleties. No feints. There is a smoothness, perhaps due to years of prior and more successful training camps.

Need a finer point? I'd have stopped smoking at around the half, had the flavors been lesser.


PAIRINGS
Coffee/espresso/latte/frou-frou, hot cocoa, or Dr. Pepper would be swell. Hold the tea. Hold the hooch.


EPILOGUE
11:50am
The smoke time was hastened by my oft re-touches. Hastening is alright, at times. I notice that other formats got higher ratings than this Churchill. I'd like a run at one a' them. Your treat, pal.

*
*    *
Speaking of not my treat; thank you to my mishpucha at Cigars City for this Camacho offering. Go buy something, gentlepersons. CC is a great online retailer/small business. Great customer service.