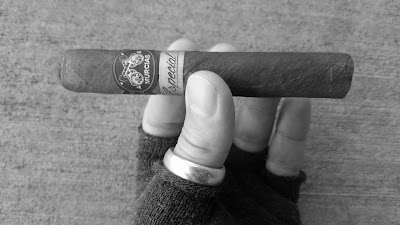 PROLOGUE
Hold up. Golden Girls is on.

The following has been preceded by minutes, not hours, of research:
This Especial is no longer a JV Caldwell selection. It's said to be the same blend, but now it has a secondary band which reiterates "Especial" to clearly separate it from the false previous thoughts of seconds/rejects. As to that blend -- not much is disclosed and I did not need told the top-leaf is San Andres. So the marketing here is simply to let you be OK and in the know with the product from a wallet, not palate perspective. Interesting.

PRE-LIGHT
Stiff and rustic like a log cabin log. Rough-hewn and sturdy. Very toothy. A seam is open and the rest run tight to loose. Veins? Sure, and crimped with a yellowing of top-leaf about them. Complexion is friggin' brown (uneven). Marbling over-top is frigin' darker. Under-hue: friggin' goldenrod. Cap is a bit short and a tick up-turned in a spot. There's a nasty looking friggin' water spot in the 3/3. Foot tobacco is friggin' brown. Packed to a medium+ density sans one missing tuft. There are so many potential burn issues here, I'm formulating a Plan B. Plain, ugly, gnarly stick, yes? Yes. I friggin' dig it, gentlepersons.

Hand-feel is tooth. Charmin Squeeze Test reveals a medium pack density throughout. Nice stiff springiness. Good balance. Feels slightly less delicate than a cylinder block. Dry, but when ya finger it a bit, it moistens. If I can think of a less perverted way of saying that previous sentence, I will -- and delete this one. (No dice.)

Schnoz notes: leather, pepper, cocoa from the shaft -- some sweeter bit at the foot -- a fruity note. I Xikar off the cap because I am uncertain it can withstand the sheer aggression onslaught of a nibble. Lotsa raisins on the cold pull and on my lips. Medium draw resistance. There are mixed nuts and some cocoa, too. I think trail mix. More so, I think Seder at Uncle Irving's house. Aunt Stella always set out trays of mixed nuts and raisins. Hershey's Kisses, too. A very intriguing cold pull or three...four... I do hope I get to smoke the thang.


LIGHT
10am
Toasting the foot is a dance of leather and raisin led dried fruits. Some red pepper flakes. First hot pull is a stiff leather plate of raisins and dried cranberries. Second hottie is retro-haled to black pepper joining the red in a coarse-ground manner, and too a load a' nuts. Pale and dark-fleshed mixed nuts. Salted and roasted. Very smooth draw and delivery. Medium+ resistance, my fave. Good smoky smoke out-put and into my smoke-hole. A sweet dry woody note lays in on my pepper-tingled palate. Perfect moisture on that tingled mouth-feel. A third hot one and smoke leaks from an open seam. I still get plenny. Primary of leather, red and black pepper. Very close second of dried red and purple fruits and mixed nuts. Then a chocolate note. I can't find the backing, but I want to say it's infused with the lower middling cocoa.

Profile early on is medium and strength is -medium. Burn is even on a -medium thickness line. Ash is tight and even ladder-rungs of grey shades. Perhaps as many as 50. Packing has softened substantially off light and the opened seam lengthens. Oy. I'm looking at a good amount of undisclosed binder.

ACT I
Flavors are finding some fantastic full-on complexities. No new additions proper, but all play well with, and off, one another. The dried fruit is phenomenal. Backing is a complex in and of itself tobacco with a separate and inherent cocoa quality which is a near maltiness. Leather and peppers lead from the front. Both black and red have been ground finer now and sauteed in some of the leather's oils. Nuts soar all the way up to the primary on occasion; from their home beneath fruits in the middling.

Ash clumps without warning shy of an inch. Dense, dry, same hues. Burn is dead even and paced nicely. A hint of flowering is visible. Top-leaf is pulling away at the opened seam, and I feel as though I am racing against time. Mouth-feel is a thin oil and a growing stiff creaminess -- a paste made from the mixed nuts. Finish is cocoa powder sweetened with fruit and -long-legged. Nice kind tingle via red pepper flakes on the mouth. Sweet salt on the lips. Strength is medium. Profile up a tick, as well, to medium+. Packing is firming up insofar as density, but not the seams.

At the close of the opening act, a new assortment of spices come aboard with a citrus zest. Mulling spices, lettuce say. The profile is so full, it's hard to spot where they land. Middling, but kinda all over it. Lacing throughout. Very special, truly, this Murcias Especial.


ACT II
Fruits pick up a coffee bean vibe addition now. I won't restate the menu -- it is all there -- here. I'm beginning to think construction shall hold. Ash dumps again, this time my schmatta doth catch the brunt. Same consistency. I'm torn on construction: open seams and a great draw. I guess how we get to a good end doesn't count near as much as that end. Seams become matters of appearance, then.

Citrus mounts as does spices surrounding it. Red baking spices. Coco is a heavy malt. Separated chocolate grows in creaminess. Leather retains its stiffness, but also sweats oils. Nuts are steadfast... almond-led with pecans behind that, then the rest of the party mix. Slated a tick more and roasted just the same. Mouth-feel and body are heavier via more cream and paste. Vibes of seasoned wood are ebbing and flowing. Fruits are dried and red to purple, but sweat out some moisture as well. Very balanced. Tobacco is putting on a show in the underneath -- cocoa and malt and barnyard laced.

Profile is still a medium+ and strength still a medium. But each robustly so. Powerful yet nuanced. Fantastic. And ugly. Of course she has a great personality -- I mean look at her!


ACT III
Pack is solid. Seams of issue have been smoked through with no real impediment to the experience. Burn is dead even and its line now a razor thinness. Ash is a tad more flaky than prior and has picked up a brown hue in streaks. Draw is top notch. Smoke out-put has been medium+ throughout with a sweet nutty room-note. For so many subtle changes via nuance, the overall complexity is quite uniformed and well trained toward a perfected delivery.

Notes huddle a bit around the mulling spices, and a quick purge delineates immediately. Tingle mellows a tick, but it was never unkind. Citrus is steering from the middling, and sweetly so. Peppers have added a white note to the already red and black. This warms their profile nicely, gently. Coffee beans are ground, roasted and are a stiff cup o' joe. Nuts are now almonds then pecans alone and a tad sugared. To borrow a word from this write-up's onset: Friggin' fantastic, gentlepersons. This Caldwell Murcias Especial is just friggin' special. Rich and robust, but with subtle nuances. The whole megillah.

At the band, with a Rebel Yell, I cry, as did she -- MORE MORE MORE. Yes, I'm singing it in my carport. It's the midnight hour somewhere.

NOTES
As the cigar smokes, an occasional retro-hale becomes more important to high-light spices. It's smooth, fear not. The seam issue was egregious, and I cannot A- grade it on flavors alone. I can't. B+ here. But minus that seam: A, full-on. I just don't know how prevalent the issue is.

11:20am
I want another run at this 'un.
Why not stop by Cigars City to see what Caldwell they have in stock.