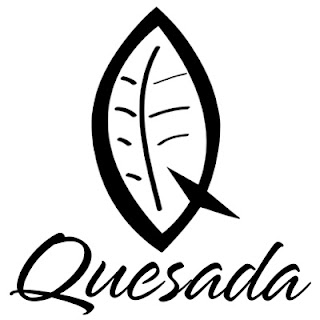 Sample courtesy of my Cigars City good and great pals. You go NOW. After reading.

PRE-LIGHT
Roasted coffee bean complexion with a Hershey's chocolate vibe coming up from under of it. Double banded in black, silver, and gold on nice enough paper stock. Q tobacco leaf logo is raised. Secondary band reads 4oth Anniversary. Barely any sheen over the top-leaf. There are oils, but they almost appear to be below the surface. Not very veiny, but one sharply crimped ridge doth impede the hand-feel in the second act. Seams Are mostly barely visible, less in the 1/3 where one is a tick loosened. Cap is well-affixed and foot is closed, as noted above. There are a nice amount of spider-web veins throughout, which tend toward a darker hue.

As to hand-feel, the vein crimp has been noted as well as notated. Too this thing is packed very tight. Not a spot below full anywheres up or down the shaft. Dry. No transfer of oils to hand. A fine tooth can be felt. Mainly dry. It's stone-like between the firmness and texture.

Schnozzing the shaft, I get peanuts and hay, and my mind goes toward the room and board of a circus elephant. I'll be -- I get a manure notion, as well. Some sweetness in the feces. Nice. The elephant is a diabetic. Cold pull off a Xikar snip is wood, dark hot cocoa powder, wood/wood shavings/hay, leather. -Tight draw resistance. Cold finish is coolly sweetened reddish spices.


LIGHT
9:30am
Toasting the closed foot takes a bit of patience. I always half wonder the point of it all. A zetz of wrapper flavor is the hypothesis on first pull, but it's mainly toasted to oblivion by the time the thing's hefted to my smoke-hole. Anyways, notes of wood/shavings/hay and some sweet soft leather act as the aroma there. First hot pull is a charred note right out the gate. It's in the woods where a hickory takes up the lead. There a faint mesquite, as well. Middling is a lotta leather and some thin heavy toasted cream. I get a deepening BBQ vibe on the finish. Charcoal and umami. Draw is not giving me full smoke, I feel. On the second hot one, I retro-hale to a more complicated wood array and coffee bean drop to my palate then tongue. Mouth-feel is thin and dry -- arid, almost. Some nuts vibe in on the finish, dark and roasted. Kitchen spices sharpen the end a tick. All notes are quite dry, as is my tongue. A slight tingle is there, as well. Third hot one has more smoke-out-put and is very, very, very mesquite BBQ. I hate BBQs. Never anything there I can eat. All cloven hooves and harsh to my gut spices.

Something is happening on the dry medium+ finish and feel. It's as if there's a flower garden near the grill. Its blooms are feeling the heat, and drying. One more tug and they're on the immediate draw, too.

Draw resistance is a not overly comfy -tight, but even, and I'm getting some slight more smoke. Room-note is very wooden with stiff leather underneath. Ash is 60/40 salt/pepper. Burn is wavy, but OK. Line is razor thin. Pack has not softened any part of a tick off light. Profile is a solid medium already, strength not on-board yet.

ACT I
I'm getting a bit more moisture now. As I do, the kitchen spices become more apparent and flesh out the leathery middle. Primary is way higher, though. Woods, mesquite hickory led charring BBQ vibe. Floral notes are dark and dry almost like a potpourri and lace through the primary and secondary. Underneath is a barnyard. Suddenly I'm getting virtually no smoke.

I toothpick the cap. I roll the tiny thing in my hands. I light light and light. Nothing. For a good bit. Then smoke. Sweet BBQ sauce. Caramelized sensation. Much tingle to palate and tongue. Molasses. Ramping up nuts? I'd like to go home now? Please turn the car around?

Leather is barely contained by the middling's boundaries, given the furthering of nuts there... roasted... almonds and pecans. Espresso is poured over top of the middling and gets into the primary. Still, with all this happening, it's a bit thin. As is the smoke, although there's a good bit more than prior. I feel like the body to flavor ratio is fercockt. In the wispiness, there is dry bit vacancies. Almost a seltzer fizz.

Ash flakes. Slight flowering can be in part to re-light, so I roll off and wait. Re-touch a bit of top-leaf. Some more sweetness tries, a toasting of molasses. Black pepper, a heavy dose of the stuff, is now on the retro-hale. Sweet 'n' Spicy. Almost immediately, the pepper mutes several notches, but a cedar and new creaminess is on-bard in ebbs and flows -- it's as if there isn't enough room for all the notes. I get the feeling of furnishing a huge living room by cramping all the seating into a small corner, leaving the rest vacant. Full a' nuttin'.

Draw is down to a mostly comfy medium+ resistance. Smoke is nigh a medium out-put. Room-note picks up a sweet creaminess. Ash pales. Line is a razor-thin wavy. Packing softens a tick. Mouth-feel is still erring toward dry. Floral jabs are marrying into the cedar, as it heads to the rest of the woods in the primary notes. Very charred and heavily roasted toasted. Espresso is becoming quite nice on the finish, and is kinda a Red Eye coffee mixture with sweet cream. Still, though, dry. Kitchen spices are leading with a tex-mex flare. Mouth-feel is much softer now, and moisture is trying, but the finish dries. Draw tightens and smoke out-put lessens again. Oy.

I'm having a rough time here, gentlepersons. A chemical taste is on the tip of my tongue. In imperfect situations, I feel the need to state that this Quesada was delivered to me in great condition with moisture enclosed. It has been in my pirate's chest humidor for a week at 68% RH. Flavors are interesting and almost uniquely displayed here; making this all the more of a frustration. Dryness sinks to under my tongue and I need a sip of agua. I detest drinking water, as I feel it takes away from my potential coffee intake, but I only do water, and only as a must, whilst I review.


ACT II
Very wispy now. Flavors and body. I'm almost tempted to see what other reviewers say about this -- but who has time to bother with cigar review, I mean really. Leather is still in the middling, but that middling is the focus now. I almost get a sarsaparilla note. Interesting, but all now falls into the category of "Almost." Ash flowers again. Darkens.

I never put a stick out because there are kids starving in America, but I must say I am tempted to here. I won't rag on this offering any longer. If something positive transpires, I shall relay it. Although even a positive flaring-up would speak to a greater combustion issue at this point. It went out again.


PROLOGUE
Whatta boon. Whattan opportunity. On the latest Radio Herf, I unveiled plans for PROJECT X. Wherein I shall, from show regular and occasional fill-in co-host, receive cigars removed of any and all recognizable traits (read: bands and ribbons and etc.). I will then review and on the next Radio Herf, will have unveiled to all, including me, what the heck I smoked. Blind review, gentlepersons. Blind review.

That's essentially what this Heisenberg is.

The Heisenberg project is named after the scientific formula of the same name that proves the fundamental limits of precision: in other words, no matter how much we know about something we will never know everything; the more we focus on one aspect, the less we know about another. The Heisenberg project has two intentions: to dispel the stereotypes that limit our ability to enjoy a cigar and remind aficionados that sometimes its best to sit back, relax, and just enjoy a smoke without over analyzing it. To put it simply, “Embrace Uncertainty!” How often do we pass on an opportunity to experience a new cigar because it’s not from a certain country, factory, or made from certain tobaccos? How often do we spend our time analyzing every flavor and nuance in a cigar rather than simply enjoying it in the moment? So with this in mind we will not be releasing any information on the Heisenberg blend, number of cigars made, or description of strength, flavor, etc. We want aficionados to smoke the Heisenberg with as few preconceived notions as possible. Just light this cigar up and smoke it wherever it is you enjoy a cigar the most; whether in solitude at home, with friends at the local cigar shop, or while taking the dog for a walk. We know this is an unusual way to release a cigar. We don’t know how it will turn out. All we can do is “Embrace Uncertainty.” We are asking you to do the same.

Your friends,
The Quesada family

NOTE
I will not be guessing at blend. I will simply be rating each of the two acts on the K-A-P-L-O-W-T-Z scale, with the added feature of primary flavor notes. For you rasslin' fans out there, I ain't breaking kayfabe. Too, in the interest of full disclosure, I don't wanna spend too much time here, because my first experience with this Quesada Winter Pack was atrocious. Redemption, might thou name be Heisenberg?

Smoke time was 'bout an hour. Flavors were not completely dissimilar from 4oth Anniversary offering.

POSTSCIPT
1/5 was unsmokeable. 2/5 was mainly smokeable but still sub par combustion. Look for the rest of my Winter Pack reviews... find them by clicking on "Winter Pack" below the share buttons at this post's end. I might as well review 'em all, right?

Thanks for suffering through this post. I owe ya.