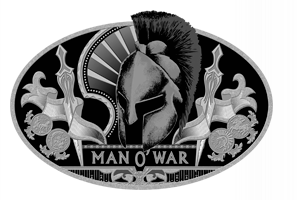 PROLOGUE
My NY Mets reported to camp today. Well, their pitchers and catchers. I'm quite excited. Don't worry, though -- slightly after Opening Day, I'll grow weary and look! A squirrel. I have trouble following a full season any longer; mainly I enjoy the background of listening to a game on the radio.

Back to this blog's cigarcentric heavy leanings: I got something special for you gentlepersons. En route to me right meow is a care package/challenge in the form of some unmarked cigar offerings. I shall blindly review and have the unveiling live on Radio Herf. Wow.

For now, I know what I'm smoking. Unlike my experience throughout my twenties. Fine. Some a' my thirties. Late teens. Lettuce just do --

PRE-LIGHT
THIS IS SPARTA. Also, it's a bit like Marvin the Martian all growed up and testicular. I'm of course referencing the band. You had me at golden embossed medallions. Black, red, silver. Nice. I'm a pacifist, so I'll enjoy more the history and less the posturing which made me leave my JHS football squad. Gratuitously growling in the weight room...pumping each other up with the slapping and yelling...it's as if these guys had yet to find out about girls; I thought to my 14 year-old self.

Secondary band reads "Side Project Little Devil" In black on grey framed in black and bordered in gold. Stick itself is veiny in a purposeful way which inhibits the hand-feel nil. Hershey chocolate bar even complexion with a high up under-tone of red. Some gritty tooth. Seams are nigh invisible. Short pigtail cap and a closed foot. Each end and the shaft betwixt shows superb craft. Great sheen over-top.

Hand-feel is a gruff 'n' greezy beaut. Exceptional balance (natch, Corona) and an even medium+ Charmin squeeze testing. Totes looking forward to the next hour or so, gentlepersons. Schnoz notes are a slight sweet 'n' spicy tobacco with a walnut vibe stretched out on topsoil. I cut the cap with my Xikar Xi2 gift and... full review coming soon...it cuts. Cuts good! Ugh!

A cold pull gives me walnuts and red fruit vibes. Some spicy cedar. Medium+ resistance but a tad of an airy wisp here and there.

4:20pm (no, really)
Remember, gentlepersons, toasting the foot is torching wrapper here. Lots of leather, cedar and both spiced sweetly. Some barnyard underneath. Draw solids up and bye-bye slight wispy. It's a good comfy medium+ resistance. Slow light. First hot pull is predominantly red pepper with a warm white pepper, very finely ground, underneath. Secondarily there is spiced cedar and a sweetly roasted walnut balance. as the finish hits, I get a nice fruitiness. Length of finish is sometime 'round Opening Day, I imagine. Mouth-feel is cushioned tingly goodness on a thus far perfect moisture level. Second pull is red pepper fronted, but not menacingly so. Carried under that is a sweet tobacco laced with fruit. Lovely, really. Cedar is really flexing, as is walnut. Leather is crisply flowing, as well. Third hot one is a meaty charcoal blast on a less dry pull with some added compost. That was different and unexpected.

Profile is a medium+ out of the gate. Strength is a -medium, but I'm braced for upping. Ash is grey and rather loosely formed. Burn is even and its line, -medium. Very fine start! ...

Oh, this is good. Oh, oh, oh. This is very good. Dark fruit juices lay out over a topsoil backing. Forefront is Walnut and toasted cedar. Middling is red, white and black pepper (black on retro-hale) with a stiff yet thin leather which serves to display. Mouth-feel is creaming up and a faint cocoa can be found therein. Long finish is sweet with fruit and cocoa, but too, balanced by very finely ground peppers which also serve to cleanse the mouth. I should say the fruit is slight, but sweetly drives the balancing nuances of spicy notes, from the back seat of the WAR CHARIOT.

Ash clumps shy of an inch and is solid until squeezed into a talc. Nice and cool. Juices are picking up some heavy dark red floral blooms. Foot-smoke is a kick in the tuchus of leather and peppers. Out-put is medium. Draw is, at times, a tick moist. All told and as stated: Oh, this is good. Much flavor. Much body. Strength is up-ticked to medium and seems ready to ride higher on its WAR CHARIOT.

We're burning a bit warm and the ash is a slight flower in 'light' of that. Nothing terrible -- perhaps I'm being greedy in my pulls. Flavors are entrenched and too, languidly so. An easy falling into lock-step march. Peppers notch down a tick; cocoa up. Very walnut finish. This Little Devil ain't an ash-grower, but neither be I. My schmatta is ever at the ready here.

Burn wavers a bit, but corrects sans aiding. Leather is subduing. Throat gets a lil gravely, but I like that sort of action; I'll take an extra Flintstone vitamin at bedtime. Black and red pepper, while down on draw, are up on tingly mouth-feel. Burn slows and out-put of pale grey smoke climbs. Walnut can best be described as black and roasted darkly yet sweetly so. Ash pales a tick.

At the midpoint, a bit of a sharpness threatens and is headed off by a quick purge. Fruits whisper. Dark tobacco soars and with it comes a return of leather and heightening of sweet n spicy seasoned cedar. Nice oils coat my smackin' lips. I'm rather nicely buzzed, gentlepersons. Brief floral interlude passed some time ago. Smoke is becoming smoother and body is perhaps a tick down. Flavors hold, as a whole. An occasional damp draw doth still occur. Very red pepper in the nasal cavity. Tingle is down-shifted. Packaging has not budged a single iota.

Final act starts as a replay of the second act's onset, flavor-wise. A bit of a higher composted backing lends a dampened vibe and a slight dulling. Strength is up to a -full, but easy for this lightweight to handle pre-supper. A nice buzz. Ash pales a tick further but still won't build.

Burn is even and on a thin line. Construction is flawless, save the ash. Combustion errs briefly and only very occasionally in the form of a slight sponginess on the draw. Notes are the same, but flying closer to the ground. As band gets smoked through and Man O' War gets toothpicked, a slight draw restriction is noted and peppery 1/2 unpleasant zing finds its way under my tongue. That's just thomething I'm pethonally prone toward exthperienthing. Pluth, I do not grade into and beyond band. I will say the smoke coolly warms.

All told, an exciting lil bang of medium-full profile and medium+ strength. Successfully manages to stave off linear tedium by making an awful lot outta what it's got. This will fall into the slight outter spectrum of many a wheelhouse. It's only a slight boundary pusher in a smallish format, and heck, do it FOR SPARTA.

I kid ya not when I sez, I sez Manischewitz Blackberry. Cola. Sweetened joe, maybe jose (Cuban).


EPILOGUE
5:25pm
I like a strong ceegar in the AM and a lighter one in the PM. I prefer to smoke pre, not post meal. In short, I'm quirky. Maybe ya picked that up already?

Make with the credit card info over at Cigars City. Thank me later.