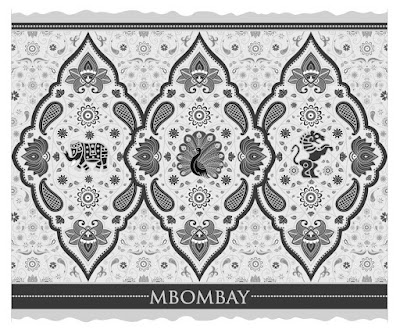 PROLOGUE
There's the band. You know, THAT band.

It's cold on my porch, and it ain't getting warmer, gentlepersons. This is a nice sized stick for inclement weathers. Let us do jump into --

"For those seeking the embodiment of toasted almonds, smooth earthiness, and subtle sweetcream… This medium­ bodied blend was created for you! This Habano blend is one that both Novices and Aficionados can embrace!" - BombayTobak.com

PRE-LIGHT
Neat lil stick. A couple of thick yet smooth veins on an overall sleek hand-feel. Wrapper is a medium brown with a lively reddish tone. Some darker mottling over-top. Yet again over-top is a healthy luster that ain't quite a sheen, but nice. Good amount of spider web veins are shooting out of the main ones. Seams are visible, tight, and even. Cap is well placed and foot tobacco appears to be packed to a medium density. It's of a matte brown complexion sans highlights, but there is a 'lowlight' of a near black bit of leaf.

Charmin squeeze indicates a ditto as far as medium packing. No soft spots whatsovever, and evenly distributed throughout. Schnoz notes from the shaft are a natural tobacco nuttiness with a touch of wood. At the foot, there is an addition of a fruity note akin to raisin.

I bite the cap off to a smooth medium+ draw resistance. A bit of sweet mineral is on my lips. The cold draw itself has notes of a very tobacco core spinning of woods (cedar?) and mixed nuts and, further back, dry dusty raisins.


LIGHT
11:30am
The aroma of a tray of mixed nuts and raisins comes at me off lighting the foot. A smidgen of the foot is hesitant to catch with the rest, I believe it's that darker tick of leaf I made mention of. I get it to light, ya see -- cigars are flammable. First hot pull is cedar leading finely ground white pepper with a fruity undertone of raisins re-hydrating. Second hot one is retro-haled and it's nice to see the dark fruit there, as well. Lotsa white pepper, too. It's a little coarser through the retro. Third hot pull is very much sweeter fruitiness and developing cedar. White pepper roasts and pushes the two other notes along. Underneath, the nut mix is settling in and an herbal note laden earth is falling underneath to back it all.

Burn is finding even, ash is a grey streaked salt with a ruddy hue and is coming on in rather loose ladder-rungs. Draw is still a medium+ and smoke out-put is, as well. Packing softens a tick about 1/2" ahead of the burn -- which is now dead even on a medium thickness line.

ACT I
Herbal notes are soaring from the earth backing and some floral jabs poke out here and there. White pepper is now finely ground on the retro-hale and subdued on the draw; making room for a very nice creaminess. Mouth-feel is perfect moisture and a bit of residue tingle from the pepper. Earth backing is interesting, as it's the core, as well. Everything is spinning off from it, but in one direction, only: up.

Profile is a medium but pushing them there boundaries. Strength is a' comin'. Body is filling up on cream, and flavors are deepening. Not a lot of nuance as of yet, but a lotta smoke and distinct flavor notes. There is also a developing tannic thing on the retro-hale which cleanses and showcases quite nicely.

Foot-smoke and room-note are coming off a now medium out-put, and are each surprisingly mellow. Soft tobacco with a fruity twist and a slight peppery sharpness.

As the fist act closes, primary notes are cedar and red to purple fruits which are not dry, but too not riened. Close secondary notes are mixed can of nuts and a lingering white pepper. Backing is an earthy and mellow tobacco. Finish is medium+ legged and a subtle highlight of sweet fruitiness on a thickening and toasting cream. Retro-hale is all fruit and pepper with a tannic note which fades to mineral.


ACT II
We begin with a clumping off of ash which is of the entire 1/3. It's of a talc feel with enough oils therein to offer a nice enough density. Very cool to the touch.

Now the herbal notes are flexing and a cherry flavor delineates from the fruit. Burn has quickened at least a notch. Smokiness plumes up a good tick from both ends. Nuts are ducking below herbs and I still cannot quantify their recipe. White pepper re-establishes its previous strength and creaminess brings us to a medium+ profile. Strength is thus far a bit behind. Cherry is filling the room-note out quite nicely. The transition was and still is, all about asserting the fruitiness via cherry and adding a touch of dessert on account of strengthening cream.

As the final act looms nigh, the nutty notes have turned to a darker flesh and begun roasting. Strength about catches up with the rest of the medium+ profile in a gentle manner, and mouth-feel is very nice and somewhat warmed. Ash has rebuilt in the same manner as prior and has yet to clump again, very nice construction in this Habano Bombay offering -- as the draw is maintained as has the softening of the pack ceased. Cherry hi-lighted fruitiness has joined with cream and I'm smacking my lips. White pepper has subdued once again. I keep my schmatta in my lap for purely schtick's sake.


ACT III
I roll of the ash as the third act opens and it's a tick more oily and warm, same complexion. Mottling on the wrapper darkens on account of additional oils. A bit of shuffling here, as we sweeten but also move away from a desert stick vibe. Just as the nuts delineate, they move into the creaminess and subdue. Fruits separate from there and join the white pepper in the lead. Cedar is still there, unchanged and somewhat in-between. Backing is a less earthy and cleaner tobacco note which finds its way to the lengthening finish. Tannic vibe lifts and falls quickly. Raisins re-emerge to join cherry up-top.

At the band, herbs go to the pepper and mouth-feel is nicely a-tingle. The herbs remain very much what I'd consider a vibe, as they don't delineate, but do add a nice dimension if not true complexity. Once into the band, all notes fall back to their tobacco core/backing and we finish nicely, if not simply at a profile which pushes -full.

NOTES
Solid stick. More toward "Novice," than "Aficionado." Somewhat un-evolved and rather unexplored. Somewhat familiar; perhaps all due to lack of nuance/complexity. All told, enjoyable. Stick it in yer smoke-hole and go. You won't go wrong.


PAIRINGS
Can't go wrong shy of booze. I'm not sure it'd stand up well to the hard stuffs.

EPILOGUE
12:30ishpm
Fingerless gloves really and truly do highlight just how frozen yer fingertips are. Now, if you'll excuse me, Portland Meadows is running and I have to go inside to scream at my TV.