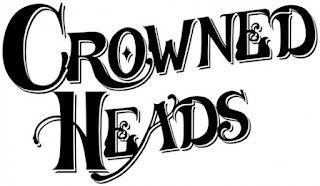 PROLOGUE
"John R. “Johnny” Cash is widely considered to be one of the most influential American musicians of the 20th century. His legacy continues to inspire many, including Crowned Heads. Jericho Hill was inspired by Cash’s rendition of “Cocaine Blues,” found on Cash’s 1968 live album, “At Folsom Prison.” The song is a tale of a man, Willy Lee, who goes down a dark path brought on by the influence of whiskey and cocaine. Willy is captured in Juarez, Mexico, and is brought to justice by the sheriff from Jericho Hill." - CrownedHeads.com

PRE-LIGHT
The band on this thing looks like a buckle on Johnny Cash's belt. There's a very much sheriff's badge design to it. Black, natch. All good. I've decided to let slide in this case, my pet peeve of the band that's too big for its stick. This is limited production -- so go 'head Mr. Huber, and wrap that thang twice 'round, y'hear?

As far as the thing itself, it looks and feels as gruff and rough as you'd imagine a San Andres homage to The Man in Black would be. I will be mentioning at hand-feel and look 'hand-in-hand,' if ya will; seeing as this suits the very visceral nature of the story this smoke is portraying. That said leathery, rough-hewn dark chocolate deep roasted coffee complexion. Gritty. Almost unfinished. Somber. One big ridged vein in the 2/3 which might be an issue. Seams are somewhat loose and varying shades of visible. Tobacco at the foot is murky dark brown and deep as heck with a few ticks up in high-lights of dirty blonde which seem in danger of being swallowed up. Cap is where the rough hewn vibe is belied and shows perfect construction behind that facade of rustic-ness.

Packing is -firm with just a bit of calm spring-back. Schnoz notes are gritty tobacco with coarse ground cocoa beans. At the foot, the tobacco darkens. A cold pull off a nibbled off cap is firm resistance and very dark chocolate with a complex sweetness not seemingly eminating from within it. The simplicity here doesn't hide the complexity underneath -- it mainly magnifies it.

LIGHT
5:50pm
Stiff leather notes come off toasting the foot. Maybe some coffee beans roasting on their way to and beyond Full City. First flavors off the first hot draw are a charred honey. There's a sweet mesquite and brown sugar on the finish. Between that, there's a coarse black pepper, coffee bean, and dark molasses on a hard leather backing. Was Johnny Cash Emo? Second hot pull is retro-haled to show an additional zetz of black pepper, sweetened by both brown sugar and molasses. There are some sweeter spices coming in now on the third hot one.

Construction-wise, ash is a pretty and thick paleness, and forming a sheath, although lilting to one side a good bit. Burn is evening off of my usual porch lighting. Packing loosens a tick about a half-inch ahead of burn. Pull loosens a tick. I should say this is my second go on this offering, and draw was an issue throughout the first, until I pulled a good-sized stick out its head in the 3/3.

I cannot fully quantify what I'm about to say, but the tobacco, which is on prominent display here, tastes grizzled, I'm assuming its the San Andres wrapper taking over the Lancero vitola. Mouth-feel is hard but of perfect moisture, body is medium+ off all the dark sweetnesses and rigid leathers. Flavors are few but potent, delineated widely, and at a medium+. Strength ain't registered just yet. But I'll say a medium as to avoid a question of imbalance.

ACT I
We start with a surprise clumping off of ash, and a surprising amount of it -- about 3/4" already. It's cool powder and not as dense as I'd imagined. A new bit of spicy dark earth comes in and as it leaves, sweet grass lingers. There's a catch in my throat and my chest is warm.

Also, my stomach is killing me. Thanks, gefilte fish. I might be in trouble tonight, and I can hear Dion Giolito laughing at me. The schmuck.

Very sweet, very dark and somber. Very rustic yet well-appointed. In short, very Johnny Cash. Burn is evening and its line is down to near-razor. Not a tremendous smoke out-put, but a potent one. Even on my porch, I can smell the charred honey, mesquite, and coarse pepper cut with brown sugar. I greedily want more of it in my smoke-hole. The leather oils up a tick and darkly so, of course. The sweet grass is the lone ray of sunlight and while narrow, it doth remain. I can almost see it as filtered through thick steel bars.

Ash clumps again. Where's my schmatta? A bandanna seemed more fitting but too, perhaps too on-the-nose. Not much more has changed here, perhaps a further sweet charring. Not bad, but all complexities have merely been hinted at thus far. I chew to loosen up the draw. Darned Lanceros.


ACT II
Spices have overtook the earth note, but there's a compost in there, as well, which has an inherent sweetness. Hard leather seeps its oils from further back now. Molasses and honey swirl around the black pepper. Mesquite is dialing back, and really only mixed into the retro-hale now with a nice dose of the coarse black pepper. Cocoa comes in and plays a nice supporting role. It's a Baker's chocolate that while not inherently sweet, is sweetened some by is neighbors. Sweet grasses ebb and flow.

The catch in my throat is kind and sweet, I know, this sounds strange -- but I like it. Still, I think I should take an extra Flintstones vitamin before calling it a night. I'm just rolling off the ash now. It won't build, but it don't flake, either. The compost is dampening from the leather's oils. That and its inherent earthy sweetness is maybe the most interesting component here, and I m not complaining.

I might be puking soon, but that'd be on account of the gefilte fish. Serves me right to trust even Manischewitz, out here in the farthest-flung reaches of the Jewish Diaspora.

Black pepper has found its way to the tip of my tongue now, not in a bad way. It slowly spreads to the rest of it. Its acting finer ground now and still, like all else here, sweet. Sweet grass hides. Very dark, very sweet -- not sickly so, but maturely and ruggedly so. I'm at the half now, and black coffee is coming up hard. It's a syrupy thing that's almost espresso and raw sugar is stirred in. Smoke to the room thickens, but I'm still getting big sips of it in my craw. It's more than enough to taste everything -- I'm just greedy is all. My chest warms and I daresay, my gut settles a touch, as well.

With the coffee, body and flavors tickle full. Strength is at medium, maybe a solid -medium I'm expecting a ramping up there. Packing softens a good inch ahead of the unchanged burn.

At the end of the second act, I'd say coffee has become an espresso. Maybe in Red Eye fashion. That's a Shot in the Drk if'n yer out West.

ACT III
There is some slight peeling of the wrapper here about aroundabouts the burn-line. Also, there is an introduction of a hardwood note, sweetly seasoned on the retro-hale. Some of the brown sugar leaves the espresso and it's full on espresso now, no java. Crisper, too. Strength is up to medium. Leather seeps a bit less of its oils, but what its already seeped is still in the compost and now the earth note, and they remain dampened. It's nice, though and does not dull or threaten the delineation of flavors. It's not as in some offerings, where a pail of water gets thrown on a camp fire. Chocolate ups a darkly sweet tick.

I recall hearing tall(?) tales of Keith Richards snorting his daddy's ashes. I can beat that: I just smoked Johnny Cash, gentlepersons.


NOTES
Each cigar tells a story. Normally, its own. This Jericho Hill tells a Cash story -- and also speaks to and of its teller. It does it almost startlingly well, I might add. A story of the story teller, if ya will -- and I will. Heck! I just did.


PAIRINGS
Bourbon for my men, whisk(e)y for the horses. Or something. I'll take a big brick o' chocolate, dark and sweet; caramel-filled even. Outside of relationships, I avoid the hard stuffs.


EPILOGUE
7:20pm
Good news, gentlepersons! I think I was and am, just having some gas. I was truly hoping not to have a gripe with Manischewitz, or gefilte fish.

I like the flavor of this thing so well, that past the band, I break it up and ready it for my corncob pipe. When I do, I unearth a short but white stick-like thing. I wonder at its possible draw hindrance.

Speaking of pipes, check out my good pal Mr. Santia. He'll do ya right. He did me right as rain with his Popeye model. If you look, he even has something called a Kaplowitz model.
LESS SCHTICK MORE STICK
Mellow: Like the song.
Coarse: Less so as it progresses
Sweet: Of the melancholy sort
Spicy: Nice tingle
Savory: Vegetarian chili
Strength: Firm but fair
Draw: Tight as a nun's _____ (but she rides a bike 'round the nunnery)
Burn: Very good
Construction: Good
Primary note: Dark Mocha, Earth

Read the Cigar Review Redux of the LBV format HERE.