Prologue:
6:58pm
Just a nod to the folks at RoMa for their enthusiasm, commitment, and professionalism. Too, their creativity. 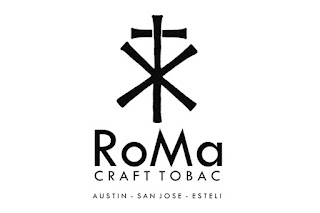 Pre-light:
Tooth and oil, baby. Lots of both on a nice thick wrapper. Really a delicious looking medium to dark chocolate steak dinner looking sheen. Pack is stiff and dense and solid, like I could club a fella who stepped outta line with it. Visible seams, plenty of veins but I do believe that's the damned point.

The wrapper has a milder nose than its appearance lets on. Some hay and slight leather. A hint of manure. The foot is vastly sweet spices with cinnamon high notes. Some creamy chocolate resides there, as well.

The band is understated and overstated both at the same time, as well as smarter than me. I take it off in a two step process involving my Old Timer. Since I already have it handy, I punch a hole in the cap with it. Very cinnamon cold draw that leaves a sweet spice finish on my palate. "Holy box of Red Hots," Batman! At the end of that cold finish, I pick up some chocolate notes that I realize were there all along.

Light:
Sparking a dense, oily offering with wooden matches, I feel, qualifies me for sainthood on account of the quiet patience it takes. The first hot draw is rigid, and I might have to carve open the cap a tad more. Very on the bone meaty. I think of a slab of ribs or plate of chicken wings. There is black pepper and there are sweet spices, so BBQ/hot sauce, natch. On the second draw a retro-hale burns like a mother.

Too, it is peppery both black and red -- but the notes are equally of a red spice variety. Capsicum and chilies. A third hot pull (after carving out more cap), is still rigid and almost wispy. Some cumin and a lot of red earthiness and emerging leather notes. Scorched hay and manure and salted earth join in on the finish. Gentlepersons, I sense post-apocalyptic carnage. Meat roasting to charred on a spit and women are screaming in the background.

Hold on, that's my wife. I left the window on the porch open, and smoke is blowing inside.

Act I:
Every character in a Cormac McCarthy novel should chomp one a' these.

The burn is wonky, but I'll see if it strays even. Very dense light grey to grey ash. I'm beginning to detect a plum type red purple fruit. I picture it dripping down the invaders chin as he helps himself to the villager's harvest. It's almost delicate now, an off-setting, in the far background -- a floral far undertone. I was wondering how the Cameroon would present itself. It does so as the previously mentioned tirade settles to a murmur. This allows for a surprisingly pleasant finish, all told. A lengthy one which lasts to the next pull.

The foot smoke is quite harsh. I'm convinced my neighbor thinks I torched my house. Full flavor. medium+ body and strength. I jam a toothpick down center and the draw eases, but so help me G-d, the toothpick breaks. I even the burn with a touch up. An espresso with nutty crema surfaces. Ash grows darker, remains intact and stiffly dense. I feel as though I could easily grow it all the way down.

At the end of the opening act, the burn again goes astray. I hear Yakov Smirnoff mockingly state "In Soviet Russia, cigar smoke you." Then he gasps and falls to the ground -- head cleaved by a brutally over-sized axe.

Act II:
A citrus mouthfeel is introduced. I say "citrus" because it is not done justice by 'acidic.' It's quite nice. It adds well to the kindly finish. All other notes remain on-board. I roll off an inch plus of heavy ash that David could have used in his sling.

Very savory, but not in an umami sense. Very hot-burning. Aggressive. Impact. I lower my hat brim over my eyes, butt they dart around -- searching out predators. The draw loosens to a medium. The pack loosens as well. The black peppers amp up on the draw to invade the finish and the Cameroon surrenders.

Some grassy notes rise up green and sweet spices even out with the peppers. The foot smoke has grown more robust, still -- yet kinder. I do believe the villagers have faked surrender and are fighting back. Does a white horse have different smell/tastes than a black horse? I do believe so.

Sweet and hot spices have blended to secure the draw. Green and hints of floral notes have taken back the finish. All this happens on a nutty chocolate leather undertone. If this ain't full profiled across-the-board, it's darn close. Salty minerals interject, weaving in and out of the battlefield, leaving a nice tangy note in their mineral wake. A glass of Zinfandel is raised -- but by whom? Everything darkens a bit. I can smell the sun setting. It dips behind trees in the park across the street.

Construction further loosens, but holds. The cigar heats up further, but its smoke remains cool. The burn evens but is not yet even. Zinfandel is joined by Merlot. Leather earthiness hides. As does the espresso and its crema. Red clay comes in, especially on the finish.

From the halfway point to the end of the second act, this is where we are. We also have an even burn.

Act III:
I cannot say this is a pleasant affair -- nor can I say it is not an enjoyable one. For those who like to "Stay smokey," look no further than this offering.

"STEP ON MY CUBES!" - Stewie Griffin

A very dry cocoa powder replaces other chocolate notes and the fires die back to a hot smolder. Delineations end here to a certain extent -- shy by far of mottling. Espresso is a sweet coffee now, but not sweetened. Peppers mute but carry over to the finish which is now a sharp if not sour fruitiness that lives at the tip of my tongue. A nice chew settles in. As does a certain near mintiness.

The wrap unwraps a tad, but that can easily be attributed to my own clumsiness and is cosmetic only -- and sets back fine. In spite of another preemptive retouch attempt, the burn goes crooked again.

The darkness gives way to a weary lightening of the cigar's profile at the end, but in war -- no one wins. Although I am quite happy.

I cannot wait for History Channel to colorize this shit, gentlepersons. I shall be, and have been, riveted.

Notes:
"STEP ON MY CUBES!" - Stewie Griffin. Wait, did I say that already?

My dad had Parkinson's Disease. Really couldn't use his hands much. We'd play chess and I'd move his pieces as per his instruction. He'd almost always win. Nurturing the burn of this Cromagnon put me in mind of that.

I need a sleep. I expect dreams of near massacre and triumph. I like how that yellow flower in the middle of the battlefield still stands.