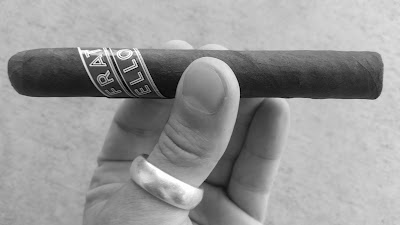 PROLOGUE
Bought a boilersuit. Zipper broke after one wear. Thanks, Obama.

PRE-LIGHT
Dark fudgy brown complexion with a goldenrod under-hue carried low and far behind. Hello, my name is Kaplowitz and thanks for reading www.kaplowitz.xyz. Ask a pal if they've Kaplowitz'd today! Nice oily sheen over-top some thin tooth. Betwixt tooth and sheen is some slight espresso bean marbling. Seams are nigh invisible. Veins are notable; one runs from center 1/3 to center 3/3 and picks up a sharply raised ridge in 2/3. It pulls the goldenrod color to the top-leaf surface. Foot tobacco is mousy brown and too, has a tick of a goldenrod under-belly. Looks to be packed to a -full density. At the opposing end, cap sits well affixed but a bit short on the shoulder, and not perfectly shaped. I like the band.

Hand-feel is tooth and sheen, 50/50, and a firm packing off a quick Charmin squeeze testing. No soft spots. Balance is 'natch superb in a Corona format. Heft is weighty for the size. The veins as mentioned form a nice-sized impediment to the hand. More oils rise to the to-leaf as I fumble and fawn. They don't transfer to the hand, humsoever, and my mitt is left feeling dry as a nun on Valentine's Day.

Schnozz notes along the shaft are a chocolate laced black soil. Added at the foot is some light and dusty spiced espresso grinds. I nibble off the cap and furthermore plan on lighting with matches. Very chocolate and cinnamon cold draw off a medium+ tension. Espresso grinds are on the cold finish. There's a tick of tart there, as well. Another cold pull shows a black peppery potting soil.


LIGHT
Toasting the foot lets off a very woody dark roasted java aroma. Black pepper is there, too. Perhaps a hint of leather. First hot pull is black pepper/potting soil alongside espresso grinds up front. Behind is a leathery under-belly which sits quite high. Middling is led by a nice dark chocolate with a creamy core. Rest of middling is a red spice rack spotlighting cinnamon. Big in-the-face flavors. Second hottie is retro-haled to show the spice rack and pepper and to singe my few remaining nose hairs left behind by yesterday's Punisher. Some leathery oils and cream hit my palate as the smoke clears. Third hot one is all aboard, gentlpersons... next stop: more review.

Line is even enough and thin. Ash is white. No softening of pack occurred off lighting. Draw is smooth and even, with a perfect bit of tension. Mouth-feel is light oils and cream with a cushioned tongue tingle. Finish is sweet and clean and medium+ length. There's a hint of purple fruit there in the pepper/spice/coffee/espresso. Room note is a sweet leathery tobacco. Profile out of the gate is a medium+ and strength hasn't hopped on as of yet.

ACT I
Burn-line finds nuts-even. plum note comes into mid-middlings. Smoke out-put perks up a notch. A seasoned cedar comes on at the 1/2" mark; plays intricately with the creamy chocolate core. Fruit goes to the ground espresso beans. Coffee note falls off as the cedar comes in -- perhaps a morphing.

Ash is very solid and stays white throughout. A seam does loosen a hair at the burn, but nothing nigh egregious. Body is filling up on chocolate cream and leathery oil. -Full profile. Strength is now a -medium. Espresso is delivered interestingly, as I still sense ground beans, not brewed. Potting soil gets some sweetness from the plum note. Nothing sweetens the espresso, but its bite registers on my palate at cleansing and kindly so. Occasionally, on the immediate draw, there is a grapefruit vibe. Burn slows its pace. There's a heating up of the flavor profile via a zetzing of cinnamon. Now that grapefruit vibe ins on a retro-hale, as well.

At the end of the opening act, the line wavers some, as he loosened seam at char runs into the ridged vein. I give a lil readily accepted re-touch and all's well after two tugs on the Fratello.


ACT II
That grapefruit vibing is influencing the plum, sharpening and bracing it. Ash is still on in full, although its sheath is a tick more loose. I roll it off, as its insulation was seemingly slowing the burn a bit much for my liking. A singular pull failed to fill my smoke-hole because of it. I'm still having an issue there... too, the packing has softened substantially up and down the shaft. There is 3 1/4" left of the Fratello and the middle of that is very, very soft. I give a big re-light and whilst the foot-smoke snaps back to life, the draw does not as much.

There we go. Resuscitated. I let it rest a bit while I find a link to the previous (2) Fratello Corona I smoked, which had no such issue. As I read it, I notice it did perform somewhat differently. HERE is that post. Here in the now, there is some re-firming of pack density. Notes are a tick bitter and I pull sparingly, allowing it its rest.

A half inch of ash is a silver sheath. Line is straight. A seam loosens again ahead of burn. Flavors all get a touch of plum and ground espresso beans causing somewhat of a marriage bordering on mottling. Grapefruit vibe leaves, but it leaves the plum a bit sour, as if it's not quite ripened. Cinnamon and chocolate begin to rebound as the second act sees its close looming on the horizon. The top-leaf again is having slight problems in igniting evenly. Strength is a medium now.


ACT III
Potting soil comes to the forefront now. I hesitate to use "primary," as we are somewhat on a linear string now. The soil note is interesting enough, though... pulling in plum and chocolate leanings. I re-touch. Smooth sailing to the band insofar as construction/combustion.  A cola note laces in and out. Strength doesn't dial back, but smooths out.


NOTES
I do wish to note this is the 3rd offering of this format I've experienced, and neither of the first two had the issues I've mentioned herein. In continued and all honesty, they have all flirted with a linear delivery particularly in their second half. All told, I would consider them a quite nice smoke, albeit one somewhat lacking in complexities. 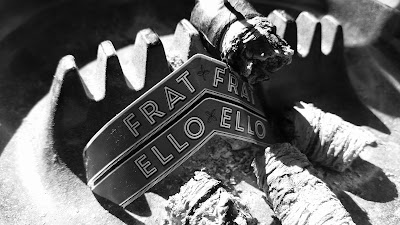