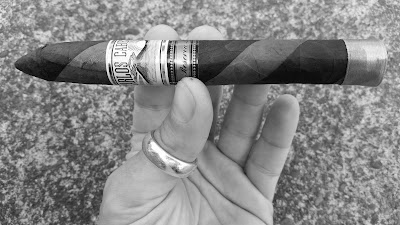 PROLOGUE
This Carlos Cabeza offering is the first house blend I've written about. It all began this morn with a dissatisfying Googling. Gentlepersons, that's a terrible way to greet the day. What eventually made it all better was the very minisculest of leads via a single comment in a cigar forum.

I was thatta way led to Havana Alley. I scrolled down their page and there was Little Jewford. There was Kinky Friedman. I poured myself another cup of coffee and rid myself of the first three, then stepped outside.

The phone rang on the other end and Jennifer Nichole answered. She's the co-owner of Galveston TX's Havana Alley Shop & Lounge; as well as the Director of Sales for Kinky Friedman Cigars. She's also easy on the eyes verily, and was too delightfully informative.

With that, solved was the case of many a moon as to what the heck this cigar was in my humidor. Now, lettuce see what it doth do. A thank-you to Mr. Darryl Martin for the kind offering.

PRE-LIGHT
Foot ribbon, gentlepersons. Youse know what that does to me. Plus: golden. It's going right into my foot ribbon collection. Secondary band. Band, band. A well and fully-dressed stick. Garmentations aside, There is a nice dose of veins, but none foreseen as any potential impediment to burn. Barber-pole top-leaf is assembled well and evenly. Seams are shy of tight but residing in a nearby suburb on the rapid transit line. Maduro component suffers a tick of an uneven complexion. Light oil sheen over-top. No tooth to speak of.

Hand-feel is that lack of tooth and light sheen. The oils work up on the shaft and my finger-tips as I fumble it around. Balance is notably nice and even, particularly for a torpedo format. Heft might be a tick on the light-side and when I thump it on my thumb-ring, it's nigh flirting with hollow-sounding. Charmin squeeze test reveals a medium density packing with no soft-spots.

Aroma on the shaft, and it is all shaft, baby -- since the foot is closed: aromatic tobacco laced earth with some sweet notes of cocoa and fruit. I cut the tip with my Xikar Xi2 war machine. Very chocolate-fruity cold draw with a definite tobacco note -- seeing as, you know, it is a cigar. Some sweet hay and cedar. Draw tension is a pretty open -medium. There's a soft tangy mineral thing there.


LIGHT
I don't toast closed foot'd offerings. This makes me nervous, but so does drinking several pots of coffee a day. First hot pull is a tick up to medium insofar as resistance. Notes are fruit and black pepper. Sweet aromatic tobacco and earth middling laced with cocoa from a Swiss Miss pack. Underneath is more earth and some creamy hay. Second hottie is retro-haled to black pepper which falls to the palate as a cedar note. Creamy hay under-belly picks up steam. Third hot draw is chocolate coming up to fruit (red, fresh) and black pepper. Earthy middling is interesting... cedar and aromatic tobacco and too pulls up some creamy hay. I think some chocolate drip down into it, as well. Not a lot of delineations, but nice distinct flavors, mingling.

Draw is set at medium tension. Not a lot, if any, softening of pack against the light. Nice slight cream mouth-feel with good moisture level. A hint of cinnamon comes in ans tingles the tongue a tick. I'd say medium profile and mild strength. Burn-line is a bit wonky (I hate not toasting) and ash is 80/20 salt/pepper. Room-note is a leathery light aromatic tobacco. At the end of the medium finish, which is a sweet version of room-note, there is a mineral quality. Calm foot-smoke, but ready to fill me smoke-hole readily.

ACT I
I re-touch here, and as always, first one's on the house. Ash is getting some silver and attempting to form a sheath. Smoke out-put is ramping up a good deal. Very earthy and aromatic tobacco-y. Leather is in the underneath of the middlings now. Cedar really flexes off the retro-hale, and pepper dies back there. Chocolate and fruit play nice.  A half inch of loose ash clumps onto my desk. I ain't even got my schmatta outta my pocket yet. Foot-smoke increases, and smoke-hole gets less filled... I sit the Carlos Cabeza in my $0.99 Walmart plastic tray and chill, boychik.

Things seem a bit better 60 seconds later. Quite fruity. Chocolate has gone to play in the earth-led middlings. I'm no longer convinced there's a hierarchy any longer, just a string of flavors that compliment one another nicely 'nuff. Burn evens on a thin+ line. Ash is pale grey with some streaking silver, and stacking up in a loose sheath. Draw is even. Course is held and we have reached cruising altitude. Profile is a medium and strength maybe a mild+. Packing has softened two ticks, but seams and aforementioned draw, hold. Fruit finds aromatic tobacco. Calm smoke, this. A nice daybreak offering; kind and simple. Undemanding. Just don't demand much from it -- meaning do not over-smoke.


ACT II
I start here with another re-touch. Each time: Maduro top-leaf. Combustion is a bit uneven and filler burns hot, says a toke whilst looking in my Dollar Store hand-held mirror. Creamy hay is a focus now, as is a new coffee & cream addition. I do believe that the cream is shared by hay and coffee and this draws the notes close together. Diner coffee, nothing pretentious -- unlike my cigar review style, gentlepersons. Burn snags, ribbons again on the Maduro side portion of top-leaf. OK, so the profile and strength are undemanding, the combustion -- a bit needy. Mainly off a less than dense packing, methinks. All notes seem hovering in around and about a sweet and creamy earthiness now. Very soft chew in my lips, as the offering has softened again. A bit less responsive of a draw and a dialing back of foot-smoke hath occurred. Profile is a -medium as I type.


ACT III
Band removes and gets placed in my Manischewitz bottle sans incident. A lil citrus rind zetz is added in now, as flavors of the 2/3 blend together comfortably and comfortingly so. Burn is behaving nicely. Tingle is on my palate now, as well as tongue and is nice 'nuff. Cream has lightened.

One last re-touch and I'm gonna enjoy the last of this Carlos Cabeza offering all on my solitary lonesome. Yes, it is navel contemplating time, gentlepersons. A very nice house brand. Easy like a Sunday morning... just keep a Djeep on hand and fly the friendly skies. There's a touch of salt in clarified butter on my full and sexy lips.

NOTES
If Ometepe is so rare, why am I seeing it more and more? Asking for a friend, 'natch.


EPILOGUE
If I hang my hand-wash out on the line, will spring come and stay this time?