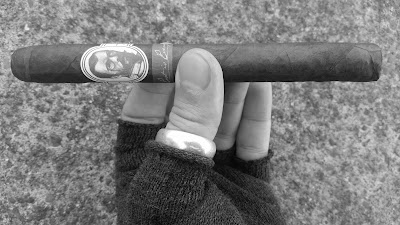 "I'd like to thank G-d and Ralph Kaplowitz for my ‪#‎ToastedBrackets‬ Cigars City victory. My prize? A box of Le Bijou by My Father Cigars.
Thanks to all else who entered and filled out their brackets -- and did so not as well as I.
Now hit my music." [Link to Queen, We are the Champions on YouTube.] - Me, on Facebook, this AM.

Thanks to Cigar Reserve Cedar Spills.
Check 'em out, gentlepersons.

PRE-LIGHT
Rich Nutella with high-up red undertones complected top-leaf which seams placed a bit loosely. Some espresso bean upticks in color are here and there. Very healthy oil over-top. Slight pigtail cap is not sloppy per se, but not overly tidy. At the other end, foot tobacco is a greenish under-toned auburn packed to an even medium+ density eyeballing. Back to shaft, veins are present, and a couple notably so, but non speak to potential burn issues. Seams are nowheres near tight, but always even. Some spider web veins mimic cracks and run very horizontally. Wrapper is a tick lumpy from underneath, but that speaks more to --

Hand-feel is a lively transfer of light oils. Aforementioned uneven top-leaf. Veins cause no real impediment. Balance is quite nice for the given format -- or any, really. Good heft. Charmin Squeeze shows a medium+ density with a few softer spots which still remain within that spectrum. Not a very lively spring-back.

Schnozing the shaft I get a chocolatey barnyard and red spice rack. At the foot, is a leather and a more delineated red pepper. Pretty simple, pretty clear, pretty straight-forward. I commence, therefore, with the clipping of the cap via a freebie My Father cutter. Draw is a fairly open barely medium resistance. Cold notes are chocolate with red pepper flakes and maybe some nutmeg underneath. Another cold pull or two begins to high-light a green pepper/spiced vegetal note, and a black pepper addition. Chocolate mellows. Sweet pepper cold finish with lotsa leather and barnyard.


LIGHT
Toasting the foot gives an aroma of the middling of the cold pulls: namely barnyard and leather. First hot pull puts a clarified salted butter on my lips and hits me with a mixed zetz of peppers partnered with a sweet cocoa Swiss Miss thing. Lots of wood in the immediate middling. Underneath is leather/barn. Second pull is retro-haled to a somewhat exotic take on familiar peppers -- quite vegetal -- mainly black and red. I get an Oriental salty sauce vibe. Wood is a plain cedar. There's a vanilla note to the sweet finish which sees its legs grow to a medium+ length. Third hottie is weirdly Duck Sauce. I love a salty stick (giggity) and I am digging this. Vegetal vibes are roasting and carry that Asian vibe. Cedar is a tick creamed.

Burn-line is ribboned, but off an outdoors wood match lighting. Ash is loose and pale grey. I ready my schmatta/drop cloth. Line itself in medium+ thickness. Packing softened a tick off the burn -- almost a full inch from the line. Smoke out-put is medium and of thick volume. Very white. Room-note is sweet earth with a hint of leather. A seam loosens ahead of the burn.

ACT I
Such an easy draw in a Churchill format needs some care to not over-smoke. On the tail end of the draw, there is a jab of very distinct caramel candy. Those chewy little bulk candy squares that you can never easily unwrap. Leather firms up underneath and gets toasted, letting loose some great oils into the barnyard even deeper down. Complex backing, there. Up-top there's pepper play of red, black, and roasting green, under that, a Swiss Miss packet. Middling is a cedar that is getting its cream brulee'd.

Ash is still on, but flaky and not overly solid. There's an occasional tooth to the ash that you can easily miss on the wrapper. Burn evens some, but still is a ribbon. Packing has recovered from flame-on and is now back to its original density. Draw is even, as is its delivery. Mouth-feel is a cushioned tingle and salty. Lips get salt, as well. Actually chocolate top gets salted. Ash dumps with a warning into my $0.99 Walmart tray. Oilier than expected, and a lil warm. Not very dense at all.

Green pepper vegetal is very cool, and on the retro-hale, it gets a smoky addition which drops well to the palate and lingers. Red and black peppers saute and reduce. Cedar middling is toasting along with its cream. Some greater amount of pepper get into that mix. Chocolate darkens from Swiss Miss and gets salted, as I mentioned. I lost the Duck Sauce, but that was quite fun. Caramel is in and out. Cedar is really soaring now, and the exotic vegal roastings are pushing it along.

Ash rebuilds in the same manner as prior. Profile is a thin medium+, strength is coming on and is a -medium. Finish is long and mainly sweet, with a pepper kick felt on the salted butter mouth-feel. Packaging has loosened noticeably clear on down the shaft. Draw remains unchanged. Very toasty-roasty flavor profile. Very relaxing and warm. Some boundaries in delineation weaken, but not egregiously and not at all mottled. Simply a soft delivery. That said, there's a new bracing citrus rind addition on the draw.


ACT II
The draw becomes a tick hesitant now, but ultimately, my smoke-hole is filled. Cedar jumps up to primary, switching places with the pepper-play. Chocolate marries with its new co-star. Very toasty profile now. Citrus ups to cleanse/sharpen. Caramel finds vanilla and the finish gains complexity. Mouth-feel warms, temperature-wise. Strength ticks up to medium. Profile fills out its medium+.

Smoke out-put at both ends ticks up a couple notches. Room-note gets a toasted vegetal addition. Very salty notes now, which I adore, but some might decidedly not be so fond of. Leather mutes and under-neath is mainly a barnyard. Cedar loses a bit of complexity as peppers mute around it.

Ash pretties up some -- getting whiter and less flaky. Ladder-rungs are attempted at. Pacing of burn is surprisingly slow, given the somewhat looser packing. Burn-line is still an unwavy ribbon; medium+ thickness. A near inch of ash is rolled off and is quite more oiled and dense. A truck-stop coffee and cream note flits in.

Pepper-play comes up in a sudden blast and is now the primary. Chocolate and cedar marriage is middling. Rapid-fire transition. Roasted vegetal is weaved throughout. Vanilla/caramel are lower middling. Barnyard is carrying with a new spice rack addition. There's a new nutmeg therein. Delivery is much more excitable now.

Ash darkens a tick. Burn-line is a -thick thickness. Coffee soars. Salt becomes a bit chalky. Strength is now a medium+ match to the Last Tsar's profile. Mouth-feel cottons some on an unchanged mid-ground moisture level. Burn pace slows. Caramel and vanilla hide -- particularly caramel. Vegetal/green pepper roasts and roasts till it's more a roasted note, than a vegetal one. It's overtaken by its black and red brethren. Spice rack in the barnyard backing heighten the whole thing -- except for the lowered primary -- which falls to middling. Short but wide landscape. Ash gets re-flaked.

Middling is everything now, and losing some delineation even after a couple of purging attempts. Coffee mutes. Burn-line is now even. Draw is no longer hesitant whatsoever. Tobacco note ramps up and it's all very salty roasted in profile. Seams loosen again at burn and ash is aerated in appearance. Smoke to smoke-hole warms another tick. Mouth-feel dries. Packing softens. Draw is same as ever it twas, resistance-wise. Burn needs a substantial re-touch as the loosened top-leaf fails to burn in a spot. My Djeep was hiding under my schmatta. Soaring nic makes it hard to spot on my now spinning desk.

ACT III
Pepper and nicotine and salt. Other notes thin and toast even more. Toasted notes char and bitter. Citrus has left town. Even the cedar isn't easy to spot at times, it just appears as a toasted note. Ash gets real fugly. Top-leaf cracks. Draw is again at times hesitant. We are, gentlepersons, just this side of fercockt. 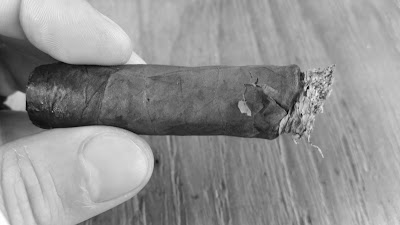 That driving pepper lacks nearly all the subtle complexities of its prior incarnation. Mainly, it's a raw and somewhat coarse black note. Remember that clarified butter? I barely do. Salted chocolate tries to get back in the primary game -- don't quite make it. Green pepper > vegetal > simplified green note. A bread note, dark, is in the somewhat bombed out middling now. Black pepper catches the back of my throat and tip of my tongue. Palate is scratched. Blister forms at the burn-line.

Smoke is near uncomfortably warm as the band approaches. Packaging is sponge. A nutty note, darkly toasted comes in with the tobacco. Black bread is more so. Happenings are happening, but not enough and somewhat randomly so. Re-touch. Curtain falls in much the same way the closing act opens.

NOTES
Limited appeal. The genius of Caldwell is in his tweaking of the traditional. This was too great of a tweak. I don't oft mention price, but I'd expect more from this stick(er). I'm not one who is prone to disappointment -- I'm too darned happy to be here. But if I were, this would be a bitter one... emphasis on bitter.


EPILOGUE
I'm having Milk Toast for lunch. Also, in my first bracket-draft, I had 'Nova to win. Hedged my bets on NC. Good stuffs.


EDITOR'S NOTE
Milk Toast was grand, with a schmear of peanut butter.