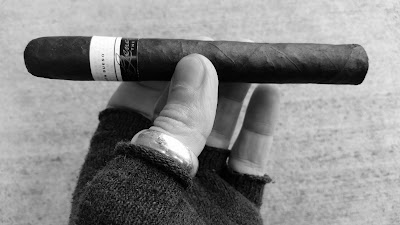 PROLOGUE
Every once in a bit, I get a bug up my tuchus. The bug in question this go-a-round is/was the bug to try this Ramon Bueso stick after seeing it on Cigars City. (Please to note I still want the ashtray. Love a drawer underneath for matches and whatwhat.)

Nevertheless, like the Amazing Kreskin hisself, Anthony of CC and mind-reading fame -- sent me this offering as part of a lovely sampling. I figured what better a day to light it up than on the day I become Oregon legal after an AM spent DMVing? Lettuce do this, gentlepersons. Lettuce do --

PRE-LIGHT
Dark, dark, dark top-leaf with an up-high under-tone of eggplant purple. In the middling of that is some chocolate. Neat yet uneven complexion -- color palette is the same, though. Pretty. Some nice enough tooth, too. Excellent oily topping. Cap is well-affixed sans a slight vein-caused tick. Some lumpiness pokes up along the shaft. Veins as a whole are barely worth noting, I notate -- amm't-wise. What are there, is a few doozies, and mainly in the 2/3 and 3/3. Seams are even and nigh invisible. Tobacco at the foot is bright red under-hue'd auburn with ticks up to blonde and down to brunette; medium+ density to the eyeballing. Very bright there. Excitingly so. Vibrant.

Hand-feel is either superbly balanced, or the thing is on the light side. Packing is a -firm density and evenly so throughout, so there's that. Between the thick rugged wrapper and its -firm pacing, it feels a bit like I'm twirling a tiny Billy Club in my mitt.  Schnoz-notes along the shaft are a sweet earthy tobacco with some spice kicker. At the foot, there's a fruit/nut vibe added in.

I execute the cap with the violent precision gifted me by the Xikar Xi2 thingy I've grown to quite like. Draw resistance is a -tight affair. Cold pull is thickly sweet earth, red spice rack, less fruit/more nut mix. Fruit is on the cold finish -- and some dark chocolate and seasoned wood notes. Lots of notes, kinda a narrow field. That cold finish at its end goes to a straight light melon note. Almost wetly so.


LIGHT
Foot area gets noticeably oilier when toasting. Notes are heavy black earth near compost, sweetness via a fruity chocolate, and some roasted nuts. Long toaster, this Ramon Bueso. Draw is a tough one, a tick looser but not fully -- still in -firm territory. On the first hottie, cinnamon pops outta and over the spice rack. Dark chocolate jumps up to meet it. An early middling is nuts and wood. Leather backing. Say hello to red pepper on the second hot pull retro-hale and that's three notes up-top. Third hot one is red pepper and chocolate, with cinnamon going high up to the middle. All else holds.

Draw holds tight. burn wavers. Ash is salt & pepper 90/10 and forming on into a loose sheath. Burn-line is a razor thin thing. Packing didn't budge an iota. Profile is a strong medium staring point and strength -- it's registering early, at a -medium. Throat catches a bit. Smoke out-put is a -medium volume. Room-note is a red pepper sharpened sweet black earthiness.

ACT I
Opening act starts with a juicy prune note -- not a plum, per se. And some fizziness which broadens the landscape. Suddenly, there are a lot of un-played notes on this new broader horizon. What is this, Jazz? What is this jazz? Wood sharpens. Nuts roast. Cinnamon falls back to mid-middling. Chocolate stays on top but it becomes aerated, like the Russian stuff I used to get in Brighton Beach. Red pepper leads from the front and in my poor widdle thwoat. Finish gets the fizzy prune and chocolate...medium+ legs. Ash is growing well but burn isn't fixing itself and oh, sheath is looser. Packaging has loosened exactly three and one third ticks, exactly two and three quarters ahead of burn. That's a lot, and surgically precise.

Let's knock the profile down to a medium, and state the strength has yet to up-tick. Ash clumps at a good inch of thick heavy dryness. Some thin musty toasty vibe comes into play, attempting to play some of the un-played notes. Feels a bit less vacant. Line evens on its lonesome. Red pepper subdues on the draw and is more finely ground on the retro-hale. Woods don't seem interested in evolving. NEITHER DO I.


ACT II
Smoke out-put soars up to a medium+ now. Draw is a low-end o' medium+ Flavors are not fully delineated, it seems. Landscape widened, was not fully fleshed out and braced, and now it all kinda bleeds. Espresso laces in, out, and about. Prune is perhaps more raisin. finish has pulled in its legs and the mouth-feel is more a thing now, and slightly arid. Ash regrows well and same. Black coffee -- cowboy style -- takes a largess role, Pilgrim.

Strength is medium and meets the unchanged profile there. Classic. Not entirely "old school," though. Too pretty. Chocolate and red pepper lead. All else is sorta mingling in the middling, led by coffee. Leather stiffens and dries underneath. Woods are getting lost.

This Genesis the Project is a heavy handed offering, but it's wearing mittens. The mid-point sees the strength up to medium+ and also sees the red pepper subdue. A pumpernickel comes in. No! A black bread -- with nuts. Waxy walnut pieces. Dry. The bread needs butter; the coffee needs cream -- I need a swish of agua. Chocolate is having issues holding the primary on its own. It should unionize. Right To Work, indeed.

Strength is up again. <--- That sentence took me fore trys two right correctly. I think I handled it well. Will someone answer that damned phone??? Packing has re-firmed. Hell, just answer the thing and take a message -- I'm busy here!!! Room-note is leather and earth and much kinder. Retro-hale is similar to what I just said. Why are you looking at me like that? I taste anise. Please don't tell anephew.

ACT III
I begin the final act by not at all beginning it. I stagger off for a couple of minutes, return, and the bastard thing is still smoking. All notes to construction hold fast. Ash picks up a tick more pepper. Top-leaf looks like a boxing cornerman slathered Vaseline all over it. Flavors smooth further, notes go unchanged.

Third act is a lot like the second act -- except I believe I was wearing pants during the second act. Great combustion, fantastic construction (although the draw resistance did change a good bit -- although, although, for the better), and big buzz. Flavors lagged a good bit behind all else.

It looks like it'll be a toasted earthiness from here on out. The chocolate is now a dry cocoa and sprinkled in the black soil. I'm flying a mile or five above it all, and screw the phone -- hand me my Dramamine. At the band red pepper rears up with a new cayenne addition. Knock-out blow. It's a zetz in the punim, but a fleeting one.

NOTES
This Ramon Bueso Genesis is a lot like being bludgeoned by a fella wearing 20oz. boxing gloves sans hand-wraps. In a huge ring -- and he's got ya stuck in a corner.


EPILOGUE
Who wants to go for a ride? Lemme just finish this bag of sugar...