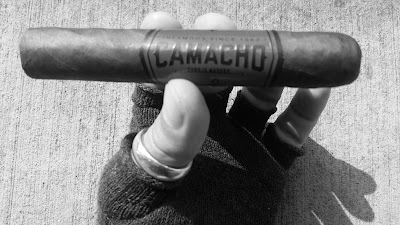 PROLOGUE
Tomorrow's Purim (at nightfall)! That's my holiday! I'm a Purim baby, baby! I got something special warming up in the bullpen to smoke with a tall mason jar of Manischewitz. But for the now -- for the now -- well, the now ain't too shabby itself, methinks. Let's see about:

"We take this vintage Cuban leaf and age it. And age it. Until its color turns black and its flavor turns earthy and rich, spiced with pepper, wood and sweet satisfaction. Not a simple smoke. But who’s looking for that?" www.CamachoCigars.com

PRE-LIGHT
Even Hershey Kisses complexion with some roasted coffee bean hue stuffs marbling over-top. Nice sheen over that, and densely but sparingly so. Under it all is a rather neat ochre, which serves to create a not very dark Maduro offering. Minimal veins. Near invisible and even seams. Well appointed cap. Tobacco at the other end shows an auburn coloring with only occasional blonde high-light. Packing there can be eye-balled to a medium density. Rather ordinary, really. Oh and by the by, there's a huge hiccup in the top-leaf in start of 2/3. Some misplaced leaf thing, but binder stays hidden and we shall see how it gets burnt through. Not sure if this occurred en route to me, or factory fresh.

Hand-feel is a perennial selling point of a true Robusto, and at 5 x 50, this Camacho fits that bill. Nice weight and great balance make up for stretching my pointer a bit wide from my bad finger. Packing is a light side o' medium+ density off the Charmin Squeeze Test. Evenly so. Schnoz notes along the shaft are earth mainly, with hints of spice rack and cocoa. From the foot, I get the same, in a somewhat cleaner near zetz.

I Xikar Xi2 the hell outta the cap and the cold draw is a nice in-my-wheelhouse medium+ resistance. Very earthy notes, quite surprisingly fresh. Some red spice rack, and dark chocolate. Nice tingle on the lips and tongue. Cinnamon distinguishes itself on another cold one. Red pepper, too. OK --


LIGHT
Real eager to burn, I can easily light the thing on the wooden match foot toasting if I wished. Fairly simple sweet and spicy earthy aroma there. Decent smoke out-put already from the foot and I'm not truly lit yet. First hot one is mainly spice rack, red pepper and cinnamon led. Up near it and almost allowing it to stand on its shoulders is a nice dark chocolate. Earth is a high-up backing which bleeds into middling and in that middle is a hickory wood note. The hickory lays nice on the tongue, seasoned. Second hottie is retro-haled to a nose hair singe red pepper that really cleans out the sinuses -- of the guy two doors down. A deeper chocolate attaches to the palate as the singe ebbs. Hickory is stronger. Earth is a great sweet and spicy balance with a bit of a savory thing when it forms into a -long finish. Chocolate and cinnamon go there, too. Third hot one is a further sweetening of the dark chocolate. Spice rack has kaput lest the red pepper and cinnamon.

Mouth-feel is a slight sweet cream tingle. Ash is light to medium grey in a wide near airy ladder-rung formation. Burn-line is a ribbon getting to even quick, off an outdoors match lighting. Draw is same as when cold. Packing softens a couple ticks for a 1/2" off the char. Pace is a bit fast. Smoke to atmosphere and smoke-hole is of a largess out-putting.

ACT I
Cinnamon and red pepper are even-stevens up-top. The primary has its own backing of an always heightening now rich dark chocolate. The rest is a melange of mainly earth and seasoned/slightly charred hickory. But wait, there's more (whew) a roasted meat is coming up from the early savory vibe. The meat is salted and now a cedar is on-board. Settling... settling...

Primary says the same. A creamy cedar and seasoned hickory occupy the middling. An under-note of earth backs well now; it gets equal sweets, spices, and savoriness sprinkled upon it from above. Quite nice.

Ash still holds loosely and mainly medium greyly. A sheath is just missed. Burn is wonked ribbons with a maybe blister forming, but no touch-up just yet. Line is thin+. Pace slows. Smoke pours with a slight bluish tinge. Coffee with cream and sugar comes into the woody middling. I'm a happy camper, yes I am, gentlepersons.

We ain't talking complexities and perhaps not even loads of nuance -- but we are talking enjoyment.We are also talking about a bit of a runner. I roll off a solid inch of ash with more density that the eye can see due to an oily core, and re-touch the burn. It seems that blemish I mentioned at the onset has sprung a bit of a leak. Not so much a runner, per se -- as a segment which wasn't combusting well. We are apparently aces now, and said blemish ain't far away from being ash.

At the close of the opening act, we're looking classic medium with perhaps a ballsier stout posture. Strength is a -medium, maybe almost. A final pull is retro-haled to a first near complexity of chocolate wood with a tick of toast and sprinkle of red. An herbal note is on the far end of the finish -- almost refreshingly mintly so.


ACT II
Graham crackers come in quite high-up in the woody middling. with the cream form the coffee and the chocolate over-top; I get, almost, S'mores. The meaty savory note is enhanced as a great balance. Cinnamon and red pepper hop off the shoulders of dark chocolate. Earth rises. Short ceiling now. Toast note gets a heavier sweet bread. Almost cake. Rich and dense. Imma say challah. I can almost taste egg. How neat. I scorch a quick blister with my Djeep. Neat transition. Sweet, yes? Yes. Also still quite meaty. A banquet in the woods. I hate dining alfresco. Coffee and sweet cream soar. Let's say challah goes to a yeasty coffee cake. Spices subdue more and chocolate is the topper.

Some fleshy nuts vibe in at the close of the middle act. Medium+ profile. Medium strength, and kindly so. Burn has evened mainly after getting past that hiccup in the top-leaf. Packing is an even medium down the remaining shaft, Draw stays medium+ but a lower one. Smoky smoky smoky Camacho. Very Maduro, but genuinely if not overly interestingly so. Mouth-feel is a tick buttery and it's on my lips, as well. Tingle is very slight and from that refreshing herbal quality. I'm full-on enjoying. A smoker for sure, this Corojo offering. Body gets heavier on accounta the creamery butter.


ACT III
We begin here with a bit of leaf lifting from the shaft. Pace slows significantly and that's aces with me. Notes moisten a tick, but a quick purging helps.

More sweet than savory now. Very mellow notes and cool smoke, Legs pull in a bit, but that's OK, it feels clean. Strength is medium+ now, but it be a pillowy cloud I is floating upon. Chocolate goes darker and creamier, as loaded coffee gets repoured and is now primary alongside it. Spices are upper middling over the lone wood -- a creamy cedar. Great balance there. Earth falls down a bit and nicely so, underneath. This Camacho has become a contemplative smoke. Some toasted caramel sidles up mild mannered.

As the band approaches, not bad at all, gentlepersons. (Re-touch.)

Final grade is tricky here, having fully enjoyed this Camacho offering; all the while understanding its far-from-stellar combustion/construction and rather simplistic or at least ordinary notes. The + is for the minty herbness.

I can taste the hamantaschen now -- I understand some are waiting for me at Temple. Good stuffs, gentlepersons. Also, I haven't mentioned my always-at-the-ready schmatta in a few ticks. Have now.